Kevin and I decided that we would have a little bit of entertainment during the day on Christmas Eve as a way to wind down. What better than to give Battle Cry a test run with the figures that I have been basing, We have enough based now to be able to run through on several scenarios from the base game and some of the fan based scenarios from http://www.commandsandcolors.net/battlecry/ . we chose to play 2 games using the 150th anniversary edition rules. 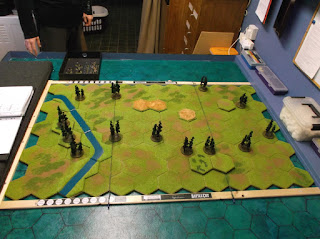 The terrain was set up as per the map, the creek was fordable for its entire length, and the crop fields would block line of sight and provide the occupier a defensive bonus as the attacker would lose a dice attacking units in them. Victory would be the first one to 6 banners. 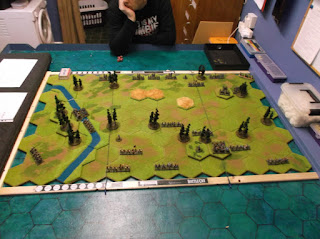 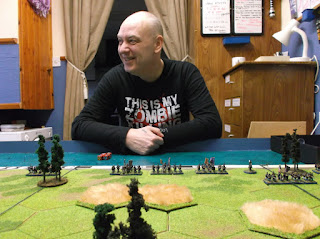 Kevin thought I was piss taking when reading the scenario notes and telling him we only had 3 command cards each. 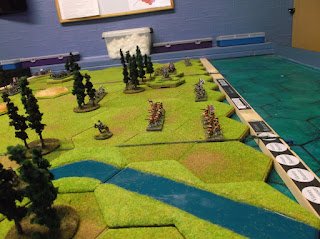 A view down the rebel lines, 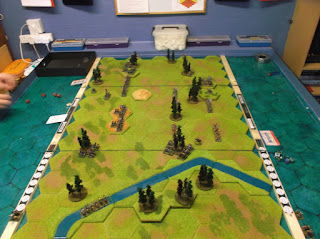 Things started of well with 3 or 4 turns played and the damned Yankees drew 1st blood as I lost the infantry unit that began exposed in the creek and my cavalry got sent packing with some retreat flags rolled against them. 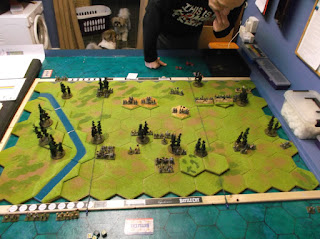 A couple more turns and I was again losing a unit and the union forces in the cornfields were pouring down a murderous rain of musket fire on any Rebs that tried to get forward. 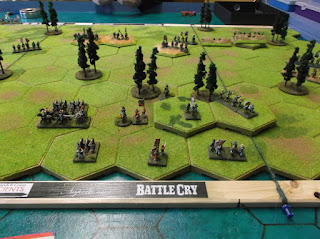 A few turns later it was getting rather desperate for the confederacy being pushed back and forced to bunch in the center. it was 4:0 to the union at this stage. 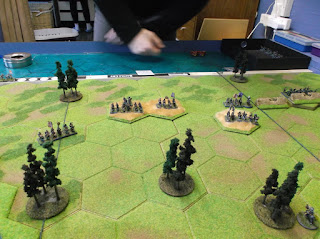 Despite the situation the Confederate forces continued the fight, claiming a few Yankee losses and pulling the score back to 4:3 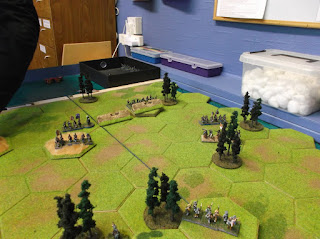 The Union forces ground forward, but the Rebs just did not have enough to stop the advance with only one unit left at full strength all the rest reduced to either a single stand or two at most. though killing the union commander levelled things at 4:4. 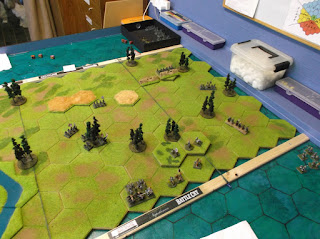 Another push from the union forces and it was all over with a 6:4 victory to the Union. The scenario was tough to play, the limited number of command cards available to both sides in this game made it very tactical, and very hard to force control in any one zone of the battlefield.

We then decided to have another game. 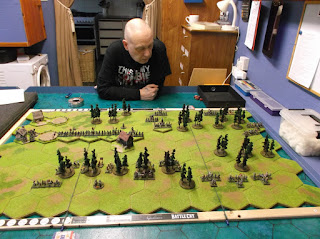 The table was set out as per the map, and units deployed. Union Forces: 8 infantry, 1 cavalry, 1 artillery and 3 commanders. Confederate forces: 8 infantry, 2 cavalry, 1 artillery and 3 commanders. 5 command cards per side and victory would again be the first to 6 banners.
I had my 2 units of cavalry in a very exposed position on the right flank and very much within striking distance of the Union forces from the outset. Having seen just how fragile these are, plans were made to withdraw them to a safer distance. 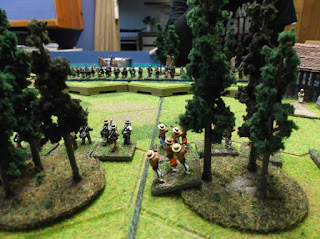 A view from the confederate side of the table as the infantry were squared off against each other. 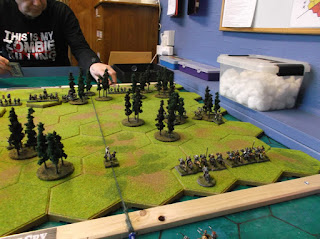 Thankfully I managed to get the cavalry out of the way but I was taking artillery fire on an exposed infantry unit, rendering it useless very early on. 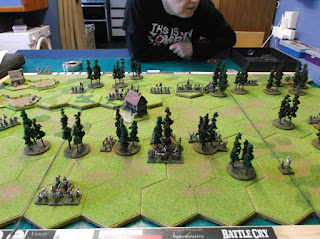 Kev rolled some great dice, throwing the rebel forces back. Forcing the left flank of the Reb lines to redeploy in the center. I needed to react fast to stem the tide. 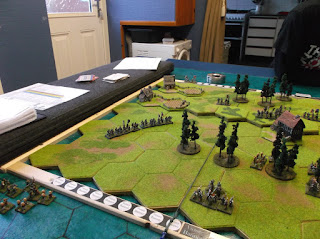 2:0 to the Union and they were pressing hard on the left flank while whittling down the troops in the center. 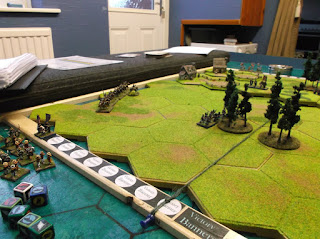 The Confederate cavalry, charged across the table wiping out one unit and forcing the other one on the flank to seek shelter in the woods. 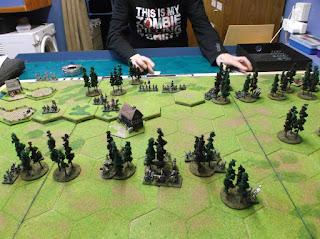 2:1 to the union and it was a bit cat and mouse as I started to weaken several Union units and with the use of a short supply card forced the union Artillery off the hill, that had proven so deadly. 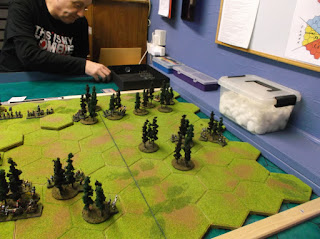 We both fought hard and at 4:3 it could have been anyone's game, My cavalry had claimed 2 more victims but were hard pressed. My center made a brave dash into the town to try to claim a couple of easy points but they failed to hit home. I tried but could not get the right flank to move. 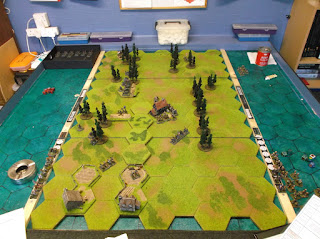 Another push by the Union forces and the game was over with a 6:3 victory... This was another good scenario and one that I highly recommend it is well balanced and requires a lot of thought to control.

I am certainly impressed with how the miniatures look replacing the games original unit markers, combined with using the hexon terrain system to replace the game board it has a proper wargame feel. All we need to do now is gather the few missing forces we need for both sides to get the full original game contents and all but the epic game scenarios will be open to us for play.

Thank you for stopping by, until next time
Loki.

I am having a break from work for a short spell until the festive holidays are over, this has given me some time to continue with the ACW project. In fact I have now based and flocked enough figures for myself and Kevin to have a game on Christmas eve. I will do a follow up report of the game after we have played.

So here is a run through of the Confederate forces amassed so far.

I am back and have a new way forward for this blog.. 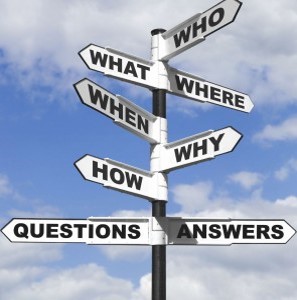 I have been silent for a very long time, in truth out of choice as much as any other reason. However this has provided me with time to reflect on the important things in life more fully. Smaller things like this blog have needed some contemplation as to the future viability of maintaining it. It has been a hectic and often turbulent few months but thankfully stability has returned. I had considered deleting the blog but then it occurred to me that this would be a selfish act and from the comments I have received many people still actively read the blog and use parts of it for their own purposes. Which gave me a firm realisation that some of my work here had been appreciated even if only in a small way.

Therefore I reflected on what would be best going forward for the Greathall. After all most of my recent work can be seen in the other blog I contribute to with greater regularity Brigantes Studio, where you will find the collaborative works of Kev at the Cabin and Myself. So if you want to see what I am up to more regularly then please add that to your subscription list.

Now I don't have the time to devote as much attention to this blog as I have in the past, nor would I want too. If I did so, it would invariably mean the same material would be spread across two blogs instead.

My conclusion is that I can use this blog in a new way, hopefully one that will help people by sharing my experience and knowledge more. The posts wont be as regular but, they should have better content and provide inspiration or guidance to others when they land. So to kick it all off in a new purely hobby focused direction I have made my first You tube video, so please watch, enjoy the shaky hand control as I club fistedly use a video camera, oh and don't be too harsh about the cricket that seems to be making a lot of noise. Being technically inept I will work it out eventually through error and trial...

Well that's me for now folks