While I may be back Gaming the painting is running at full tilt at Brigantes with lots of items that are needed for Salute by various Manufacturers.

so if Steampunk - sci fi is your bag then pop over and check these out.
Posted by Loki at 17:27 15 comments:

First run out with the new Kallistra Terrain

We decided that we would have a fictional Jacobite Rebellion game as the inaugural run and test of the new terrain. Now while we use Black Powder as our rule set of choice we have substantially play tested and changed the movement mechanics and now our brigades are activated by cards. This really eliminates the Igo Ugo system nicely and makes every game very random. You know you will get the chance to activate the brigade but when it will activate is another matter all together. 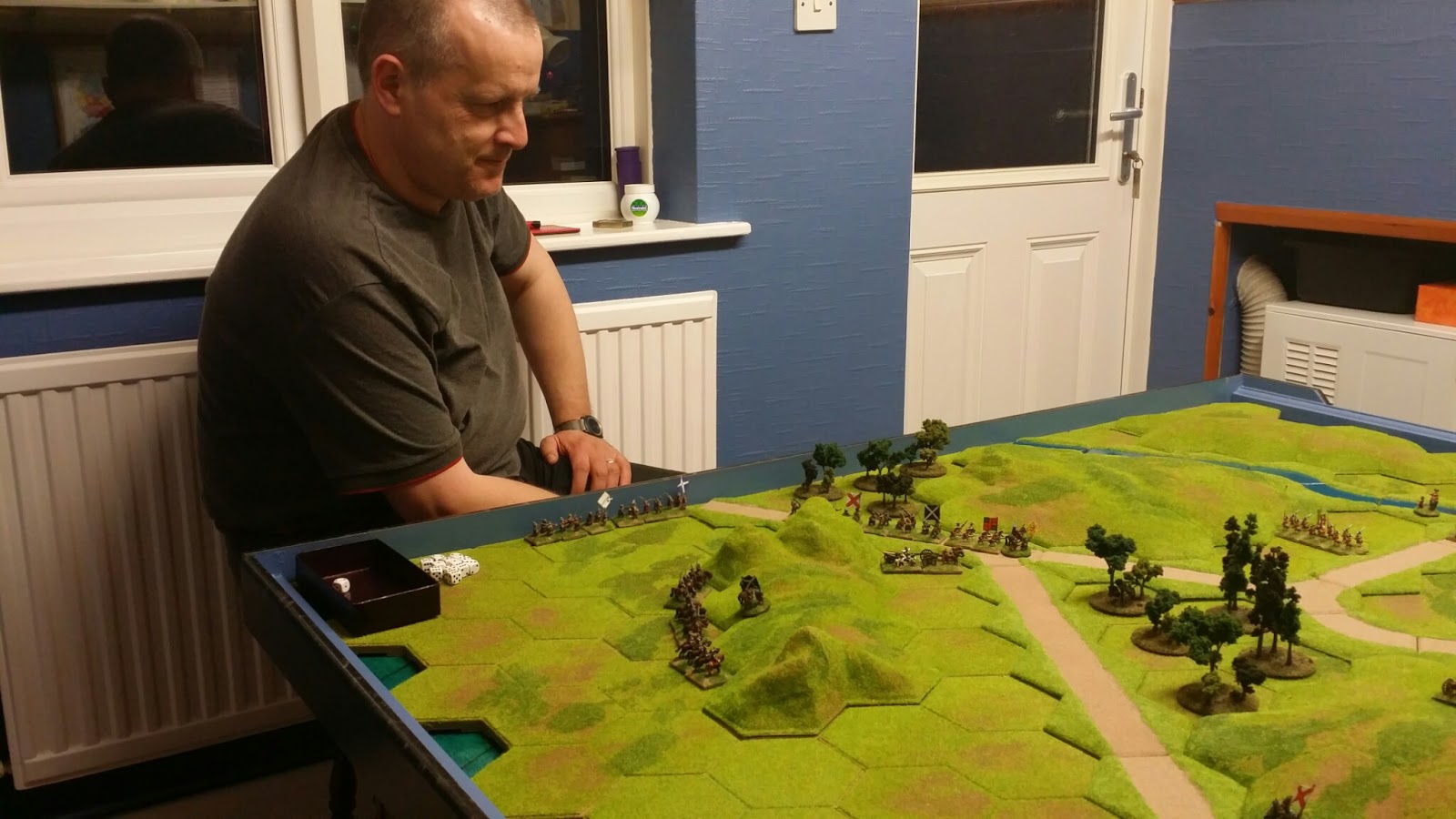 Some gamers should come with a health warning regarding the pure inability to roll a dice! 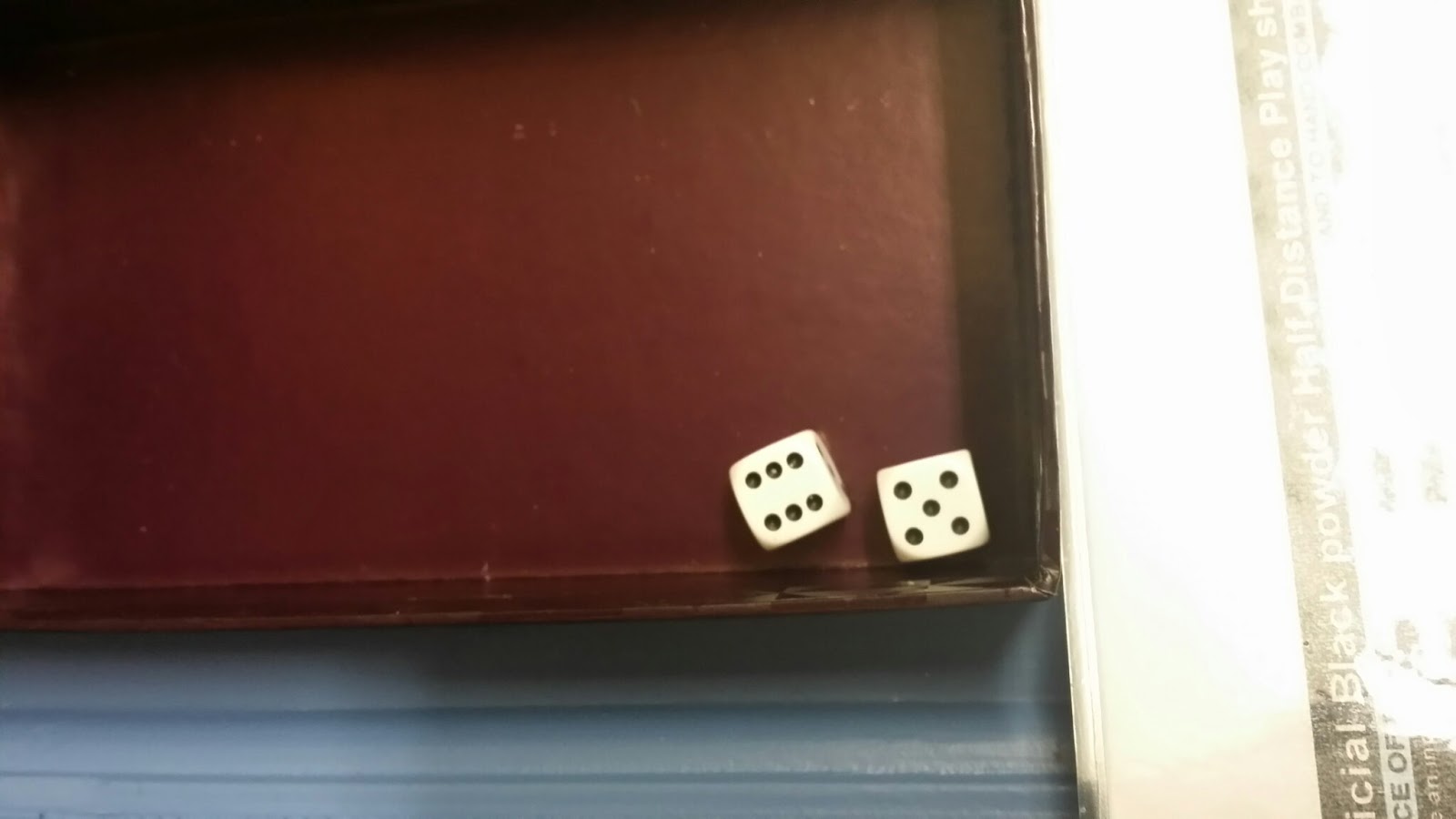 Although credit has to be given for consistency after 4 straight failed command rolls he went from the position in picture 1 too: 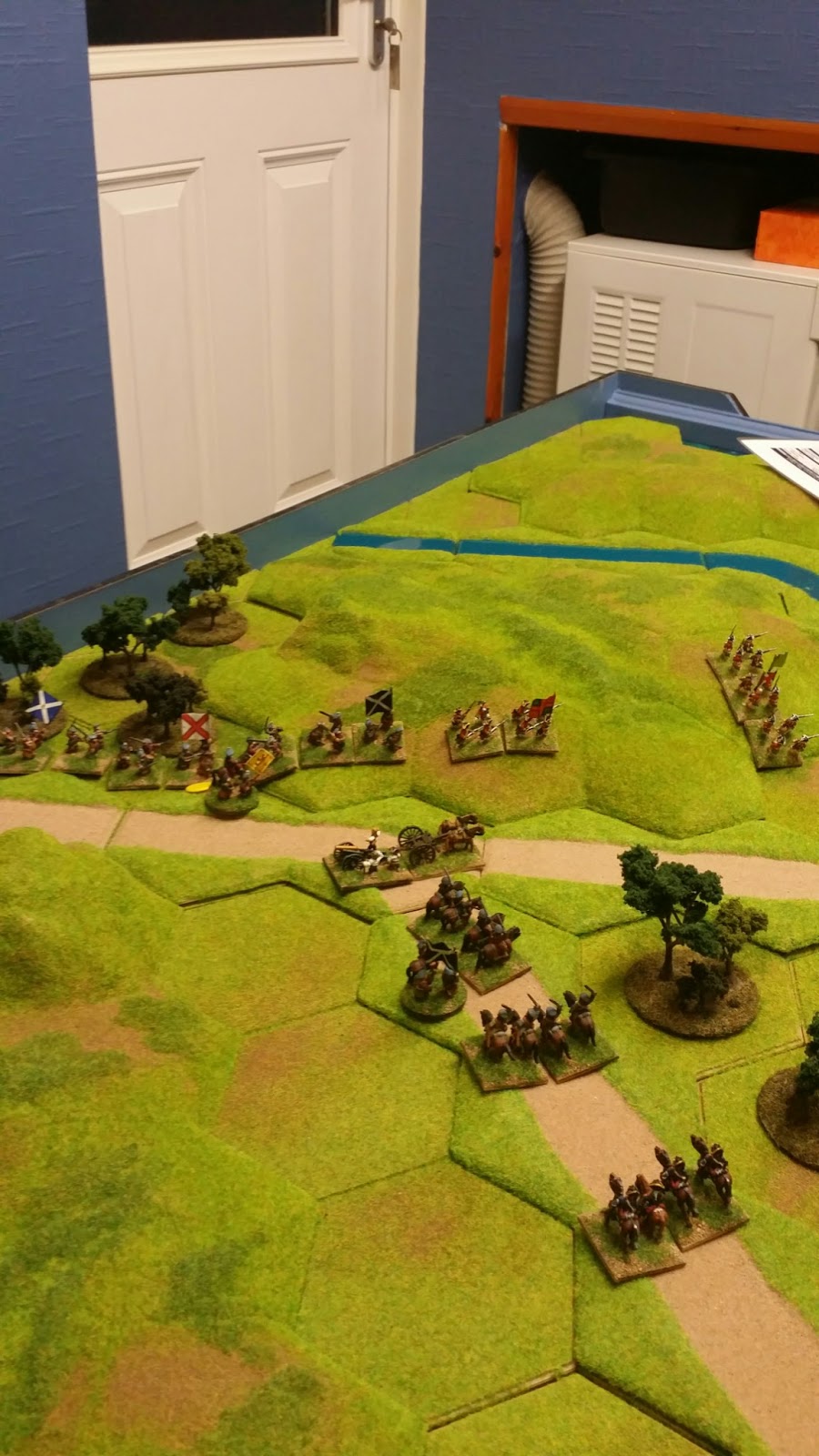 Having everything leap off the road in columns and running into a wood disordering half the brigade, but with the cavalry poised to repel the advancing English Yeomanry! 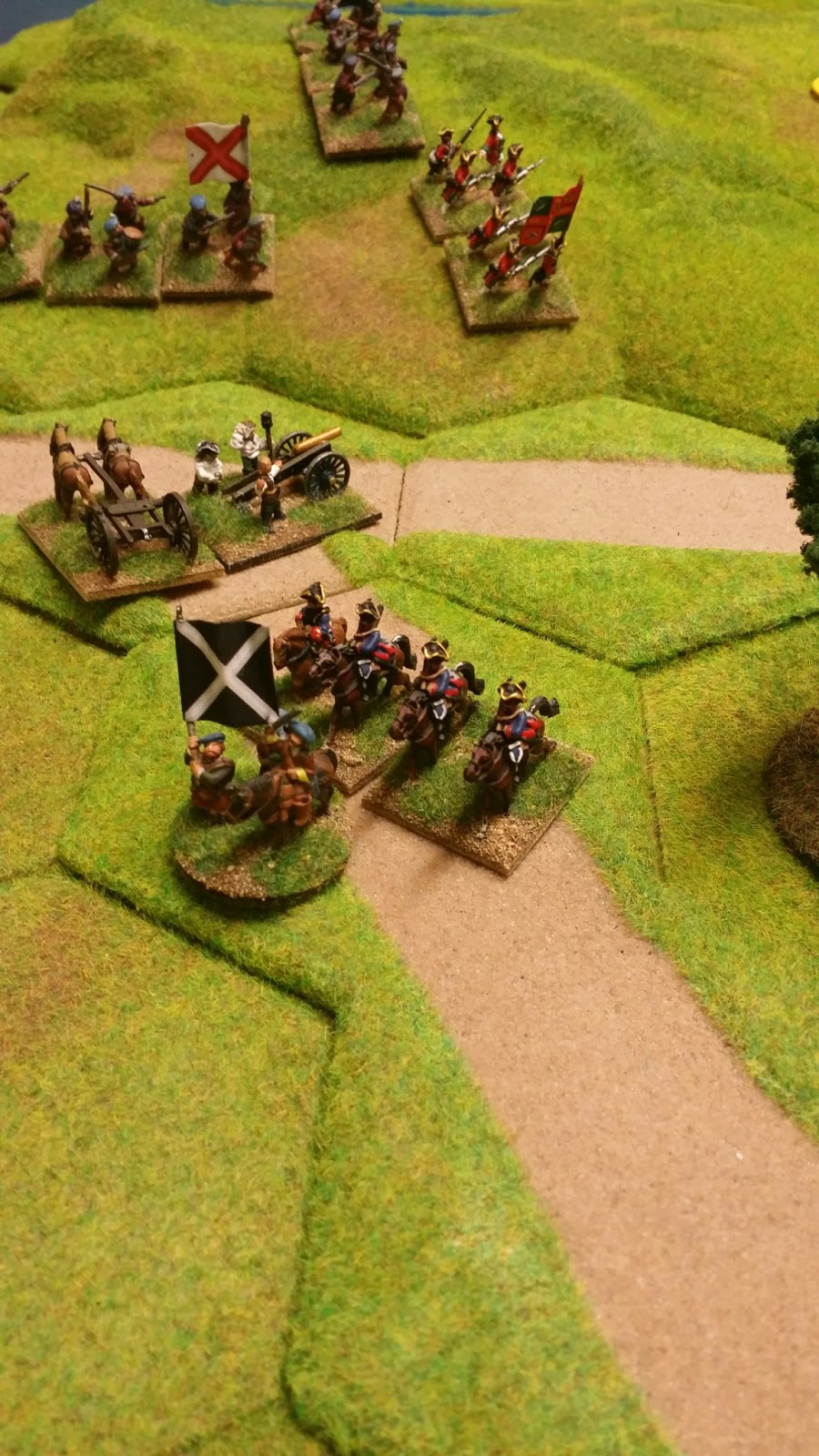 Or perhaps not as the brave lads were broken in short order and running off table.

Meanwhile on the other Flank I had to protect the Whiskey still. Against Hordes of advancing English! 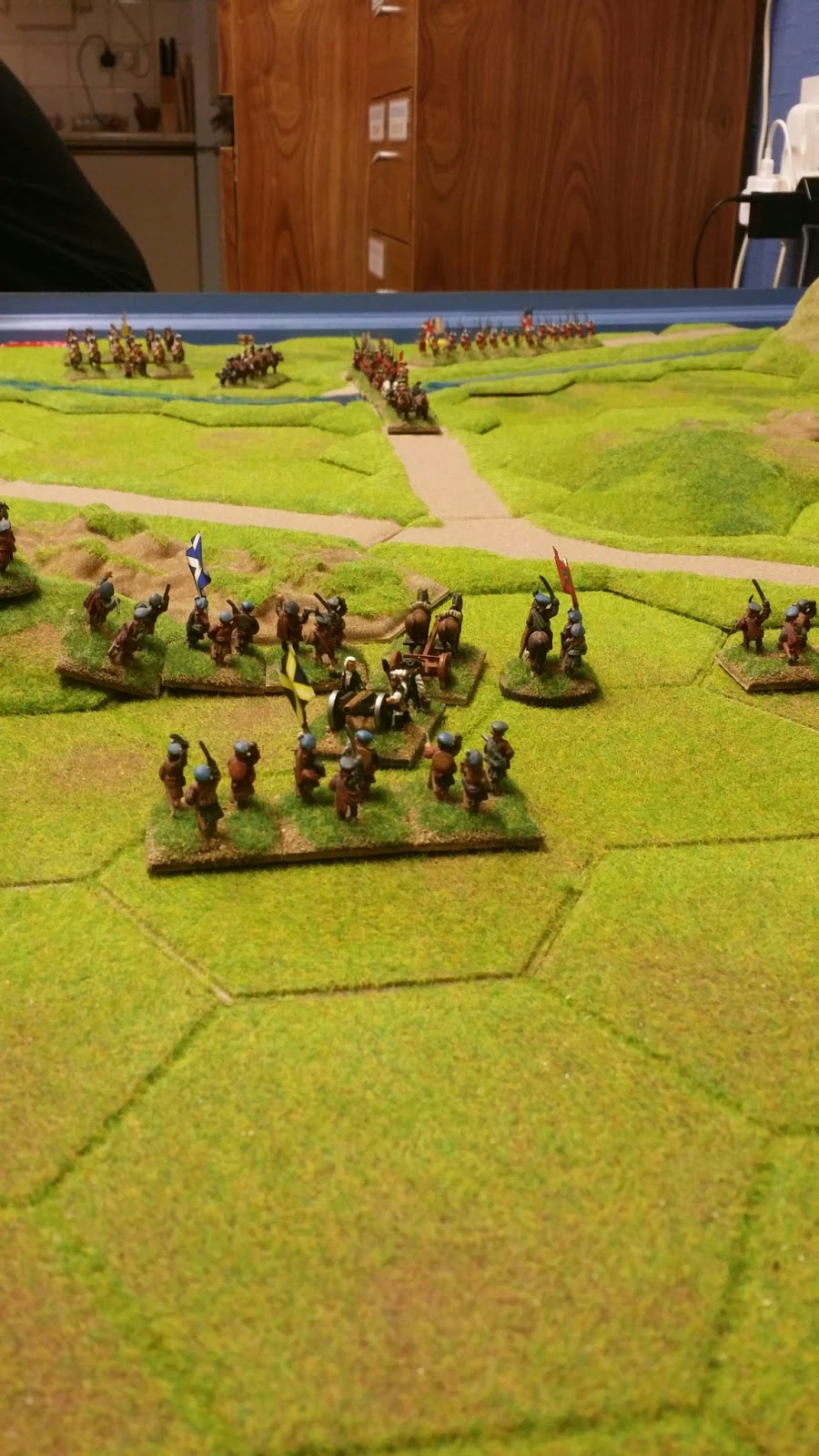 Yep as usual I drew them on, well I would have but Kev was struggling having got bottlenecked crossing the river and failing to move for a fair few turns. 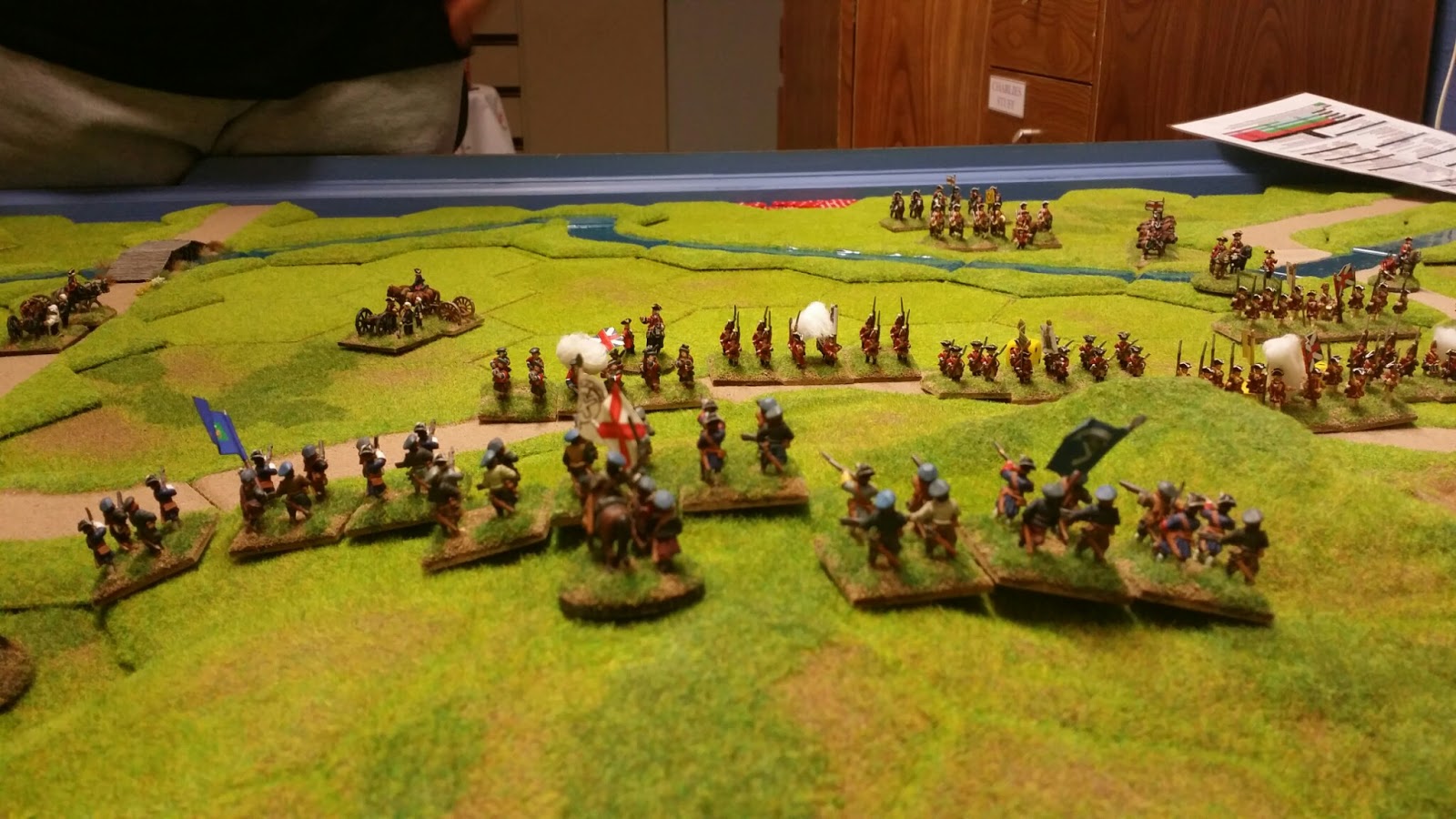 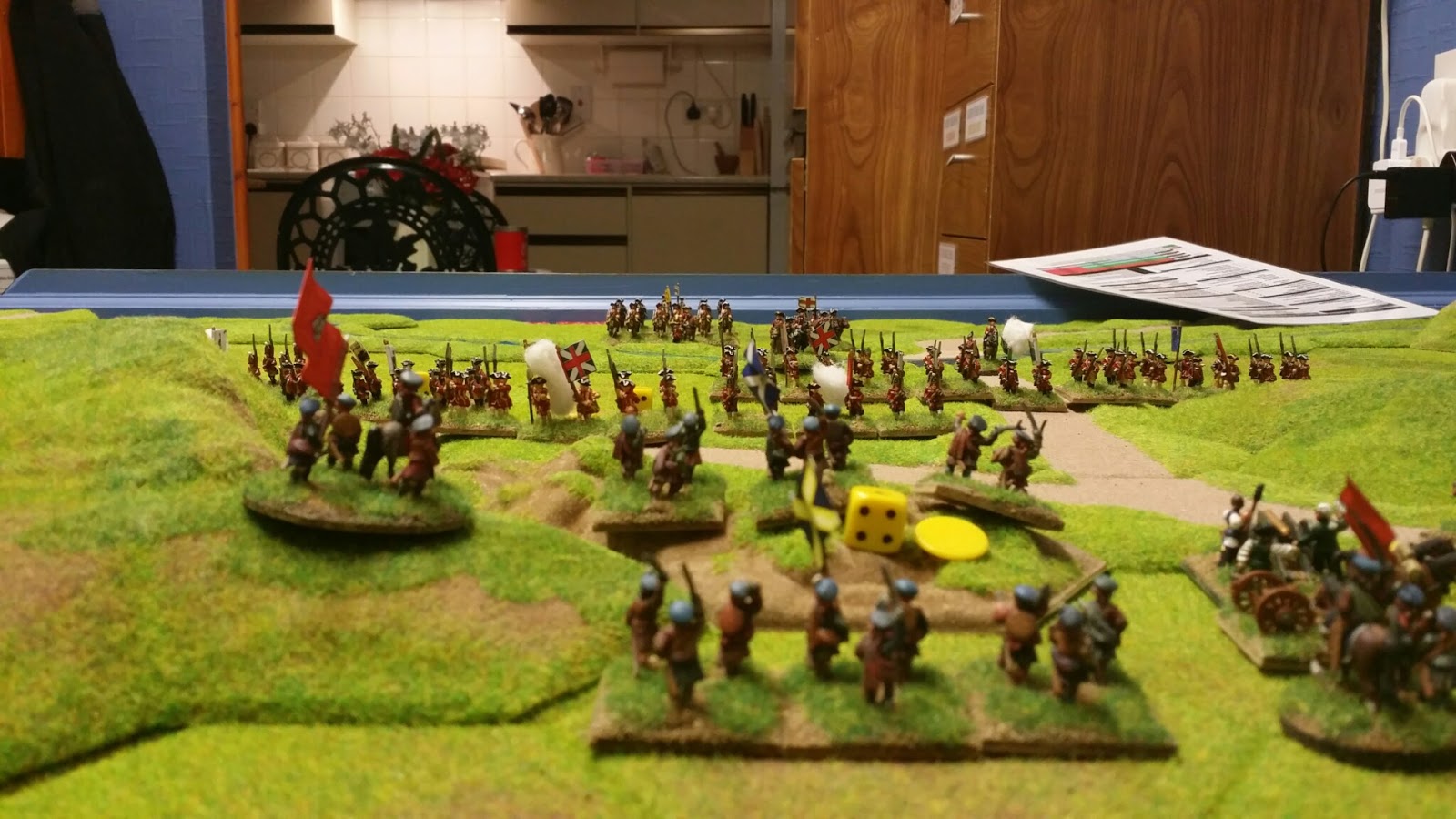 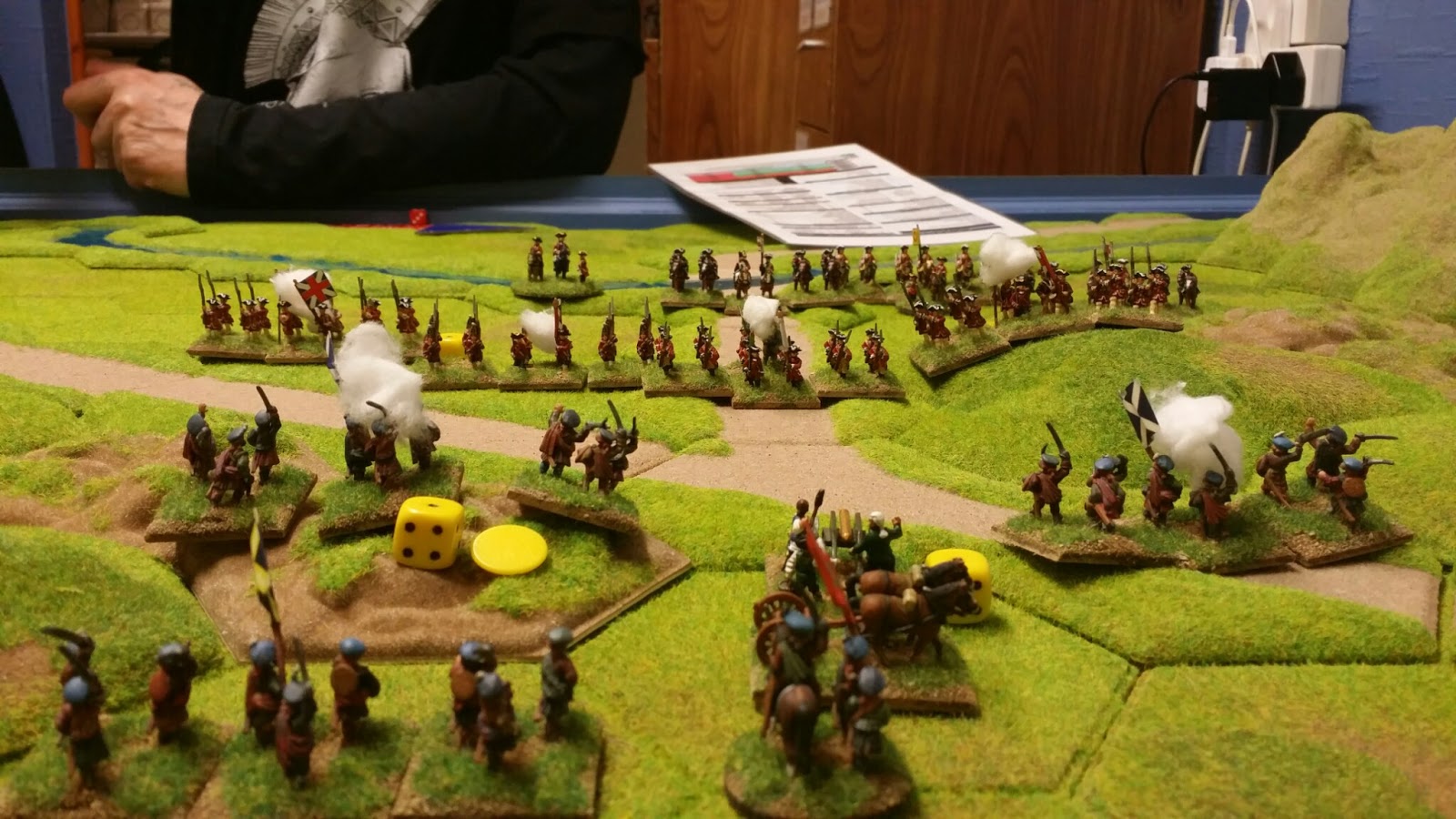 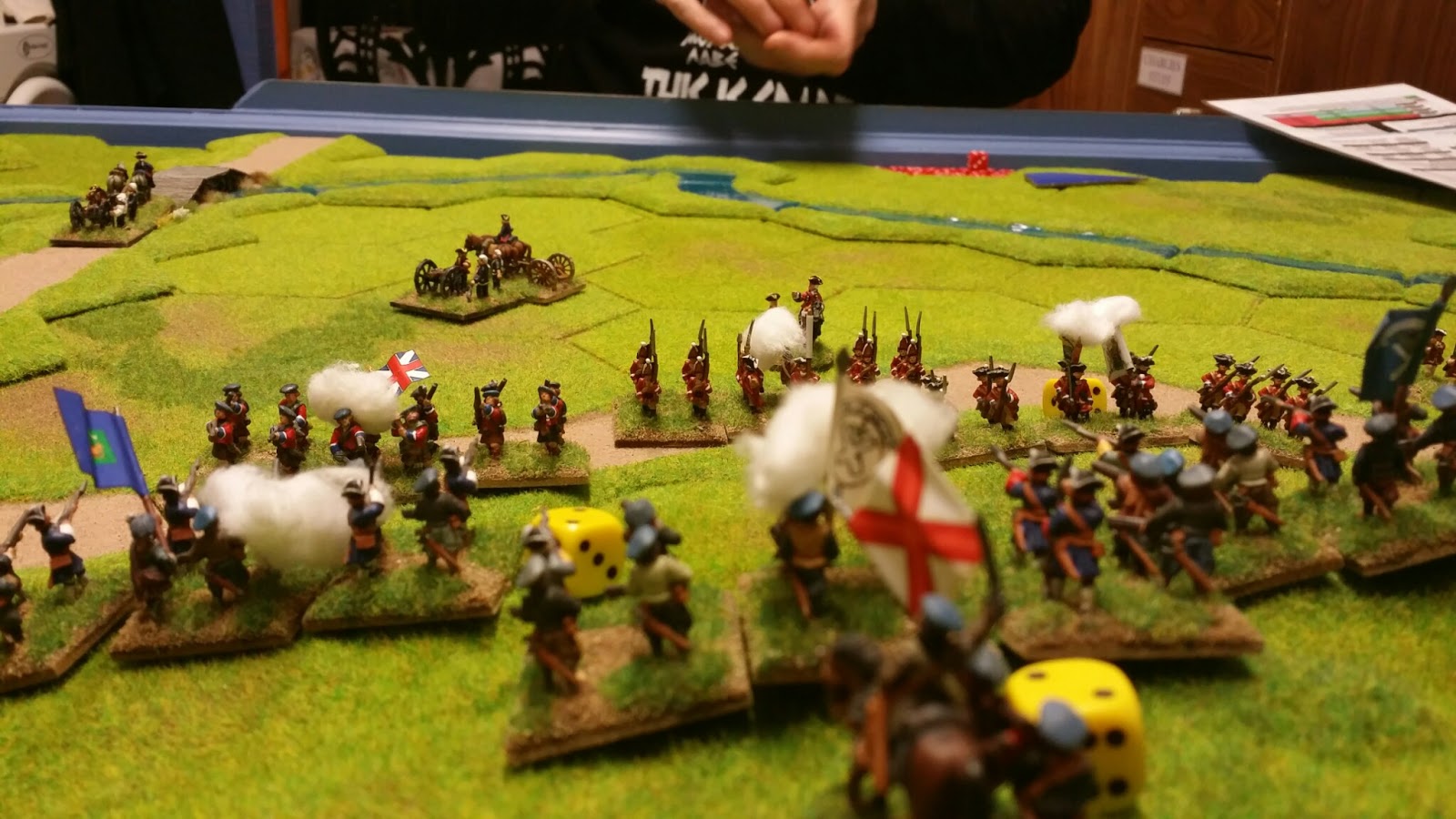 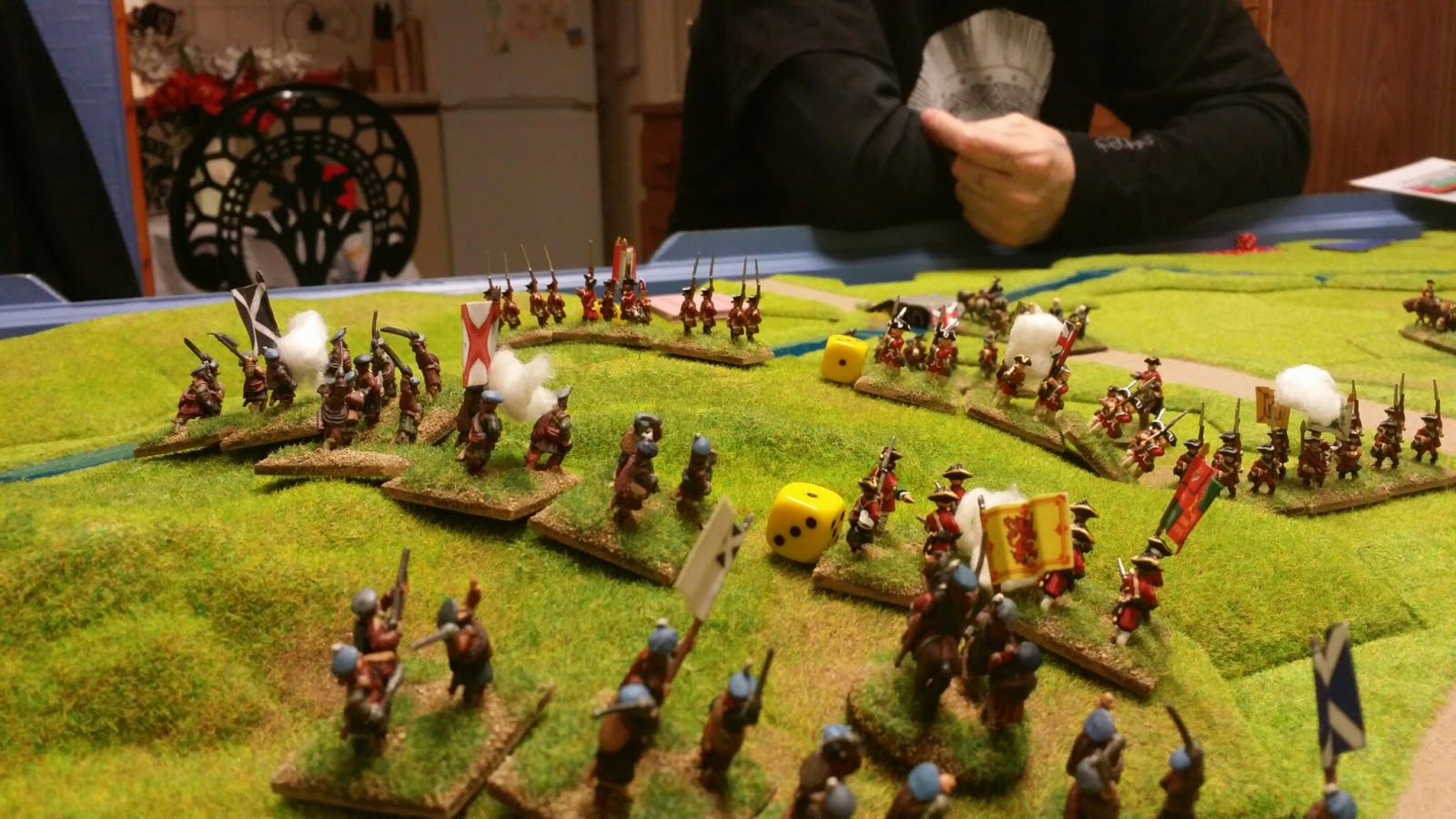 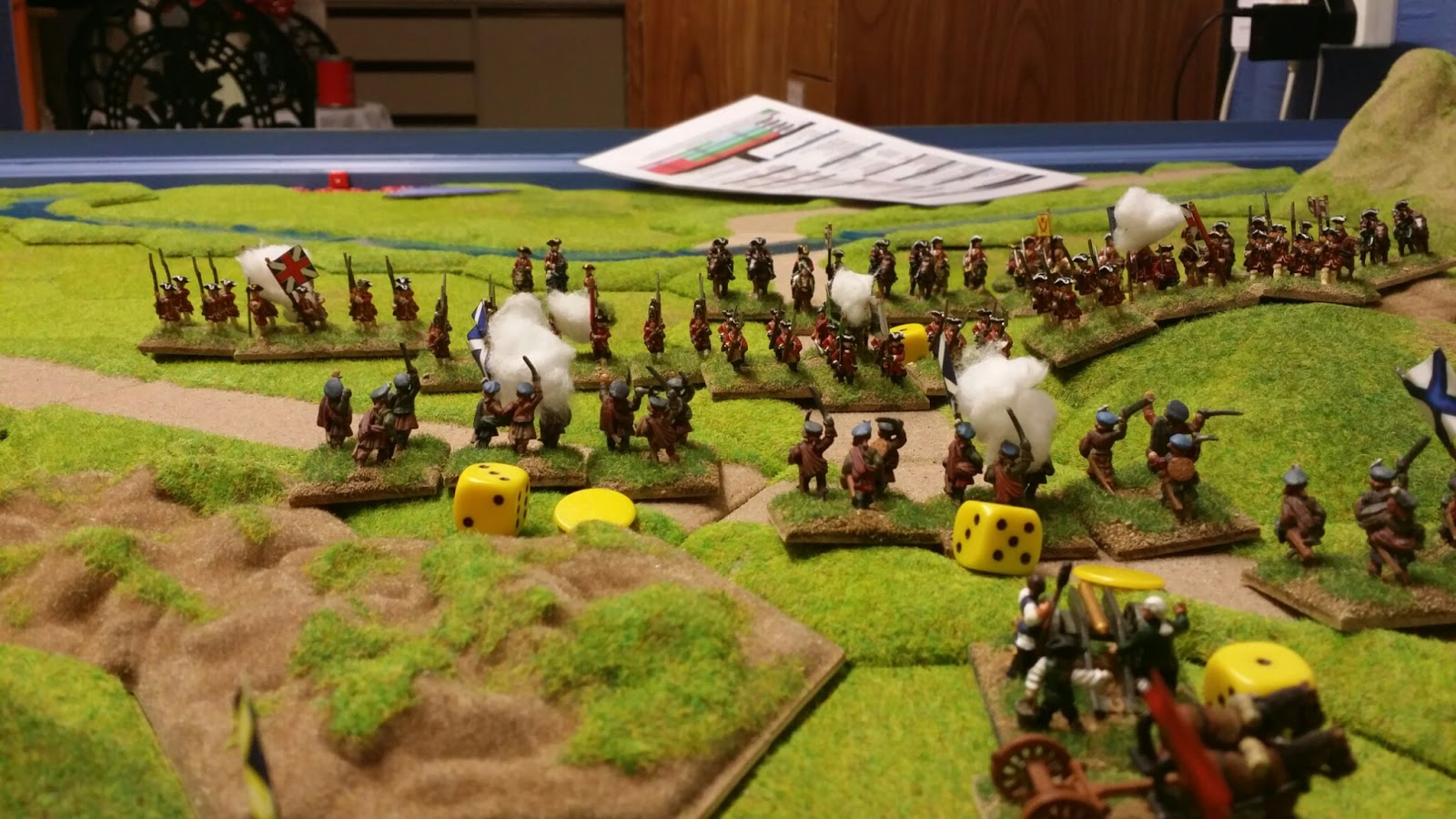 However the casualties were mounting on both sides 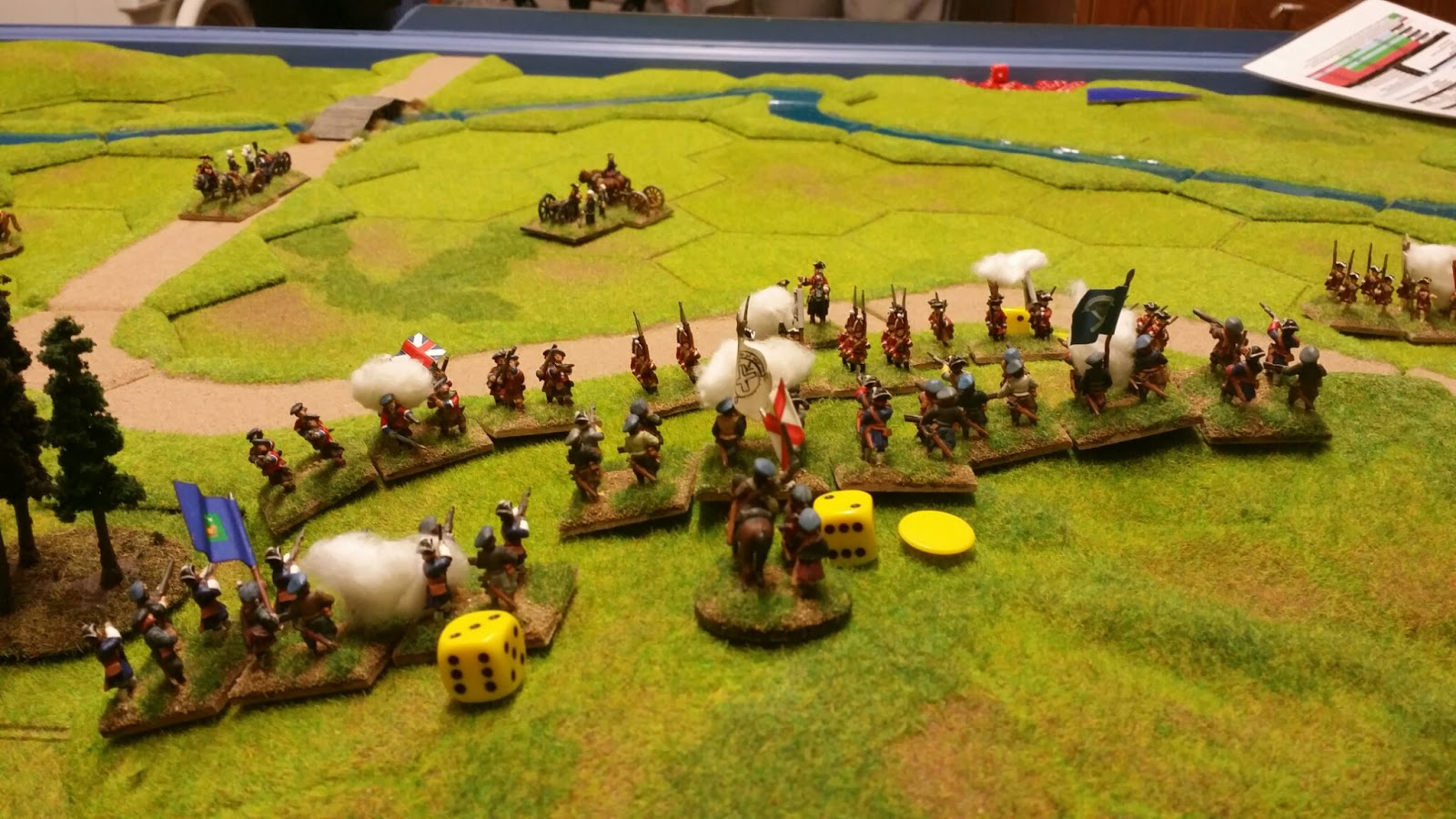 Before we knew it the toll bell rang the Jacobites would have to break camp and find solace in the bottle as the English were just too strong for us.

Equipping the cabin with New Terrain

Oh its been a hard month of no gaming as we decided to invest in a whole new look for the table at the cabin. Biting the bullet we gathered together all the terrain boards and scenery and stuck the whole lot on Ebay. As regular readers will know I do all my painting in the Great Hall but once a week I head over to the Cabin for a spot of banter and gaming. Myself and Kevin have been looking at investing in the Kallistra Hexon system for a long time now, and this year we decided to commit and invest a whole chunk of change into this endeavour. We know this is not to everyones taste but it is our terrain of choice as we have great plans for the versatility of this system.

So having had a day to recover on Sunday it was up bright and early Monday morning for a trip to Kevs to sort the new terrain out and make it compatible with the cabins table size. 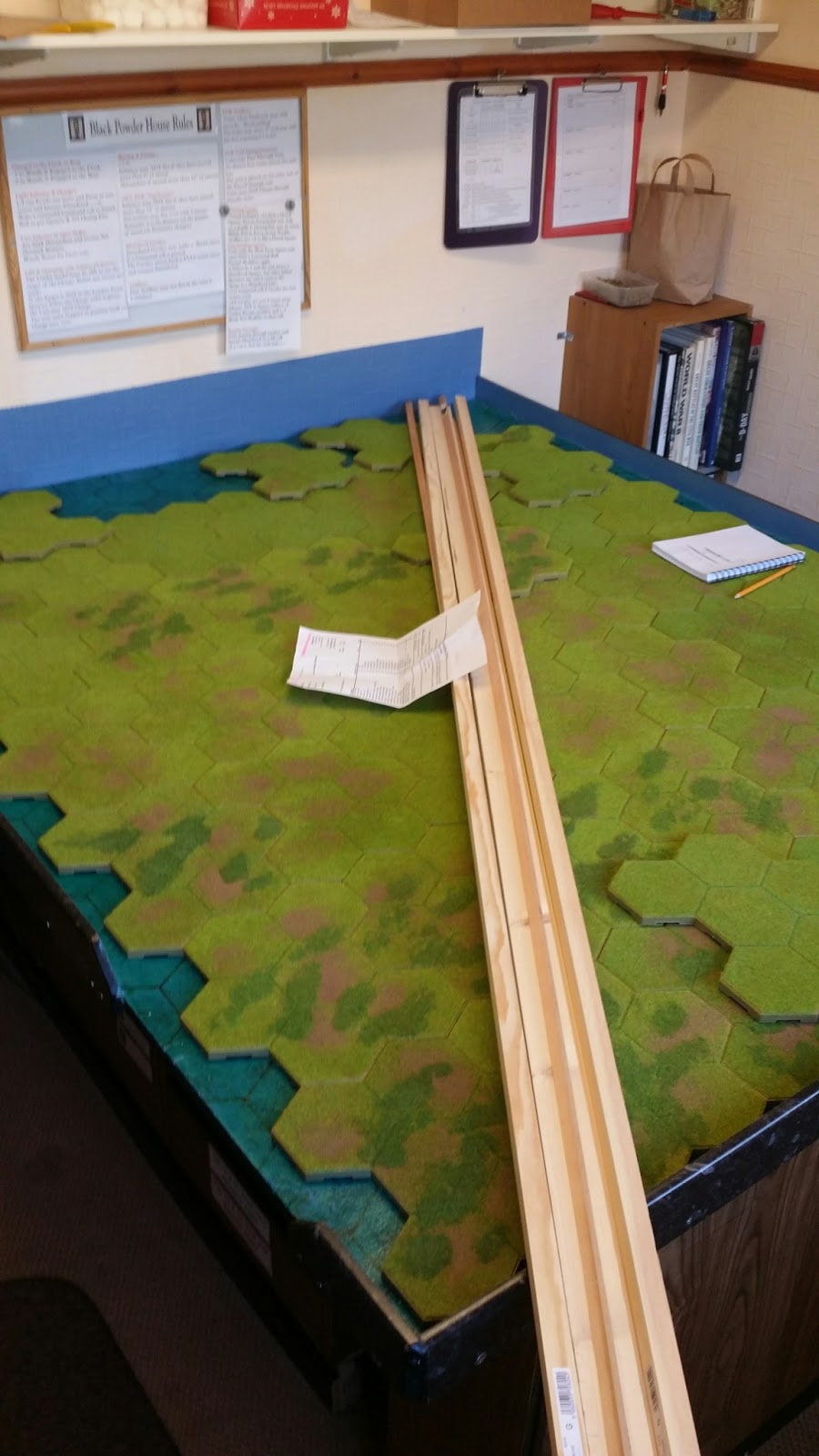 We started with laying down whole boards in a variety of ways to get the best fit, before starting to frame up the table edges and get a tight fit. 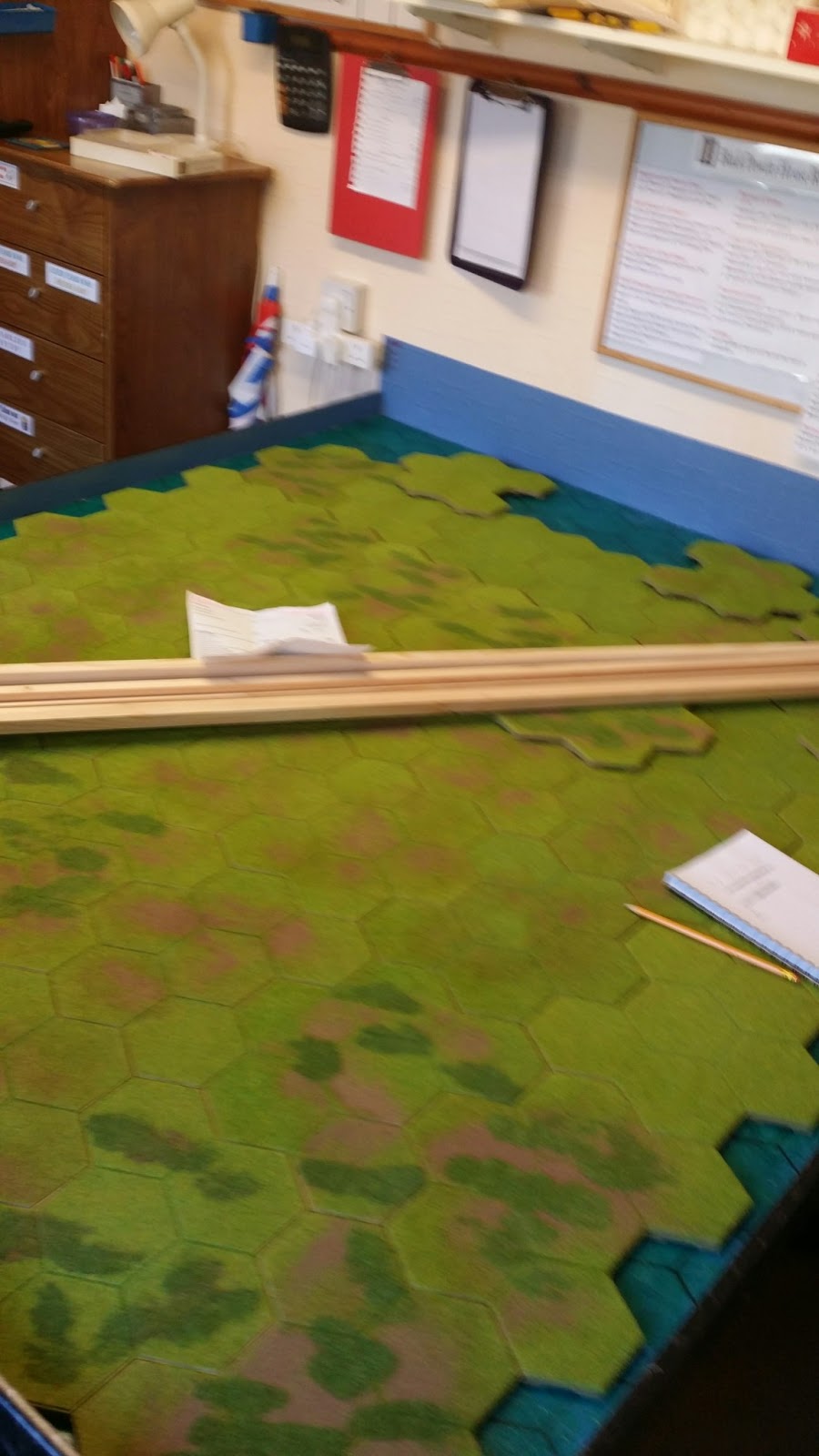 We choose the Triple 7 mix as we wanted a variety of landscape to work with and like the random earth patches. 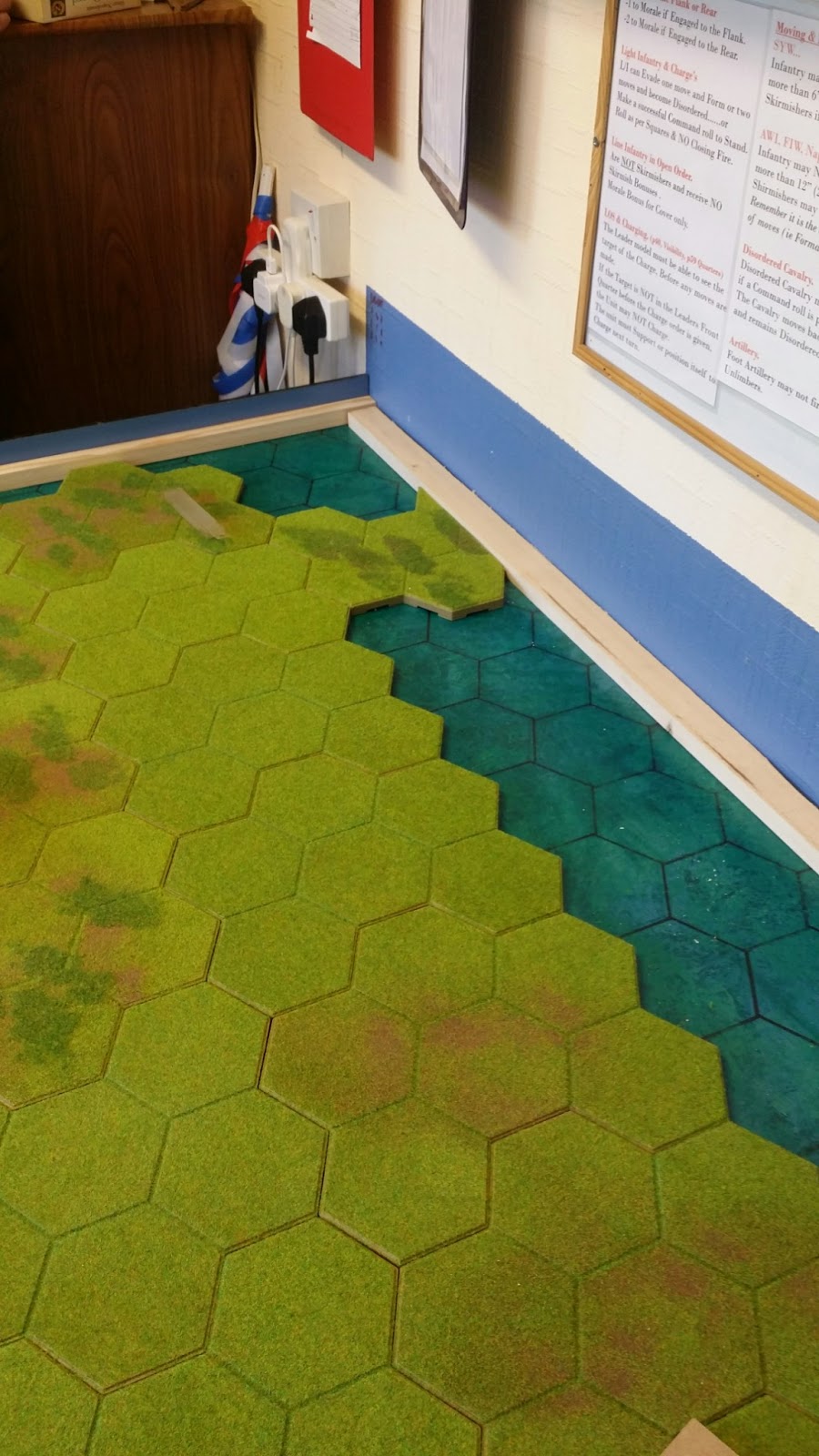 Having chosen the best layout for us for tiles we began the task of cutting the ends to size. 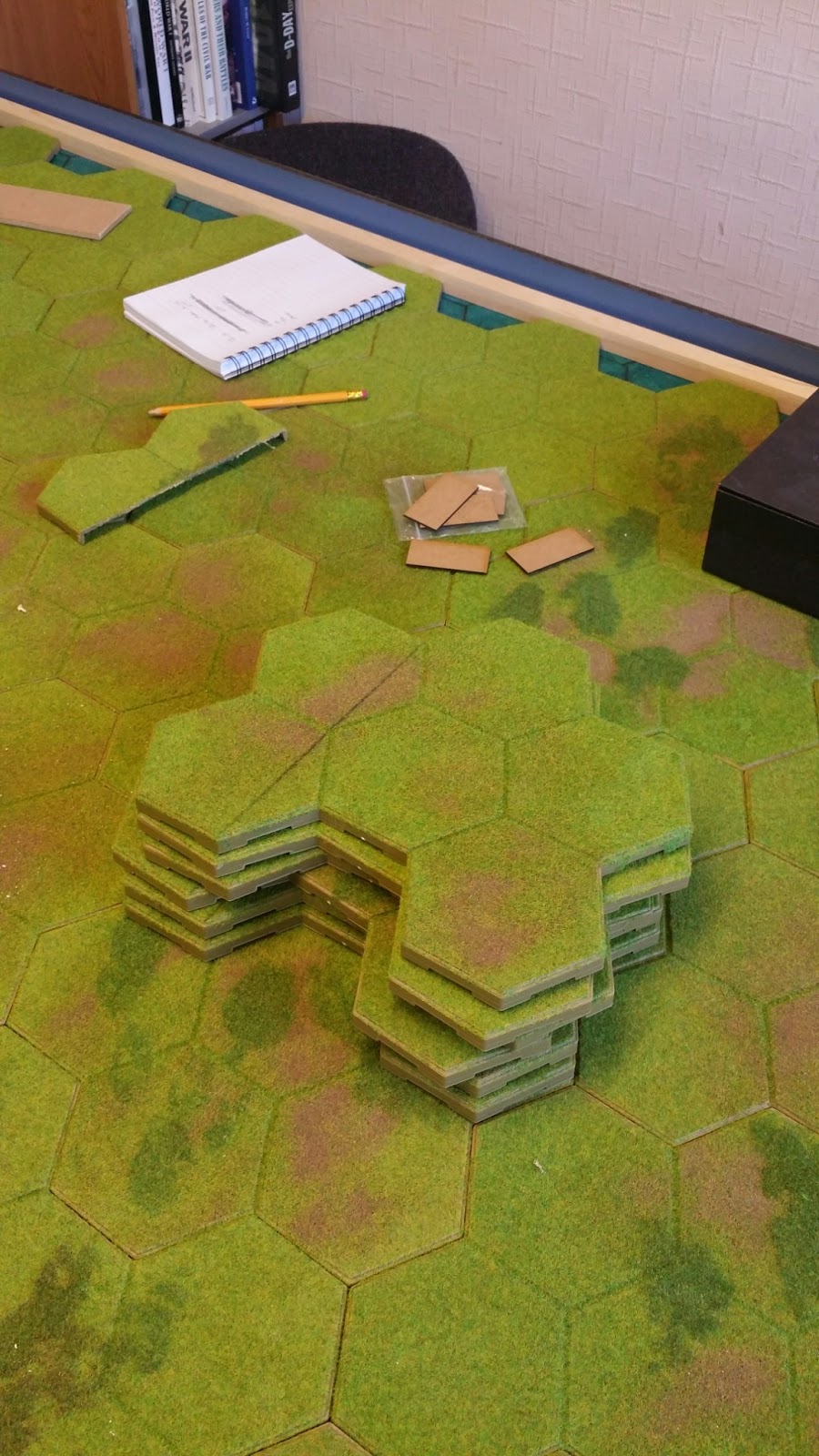 Tiles marked ready to cut, the off cuts would also provide the infills we needed to fit at the opposite side of the table. 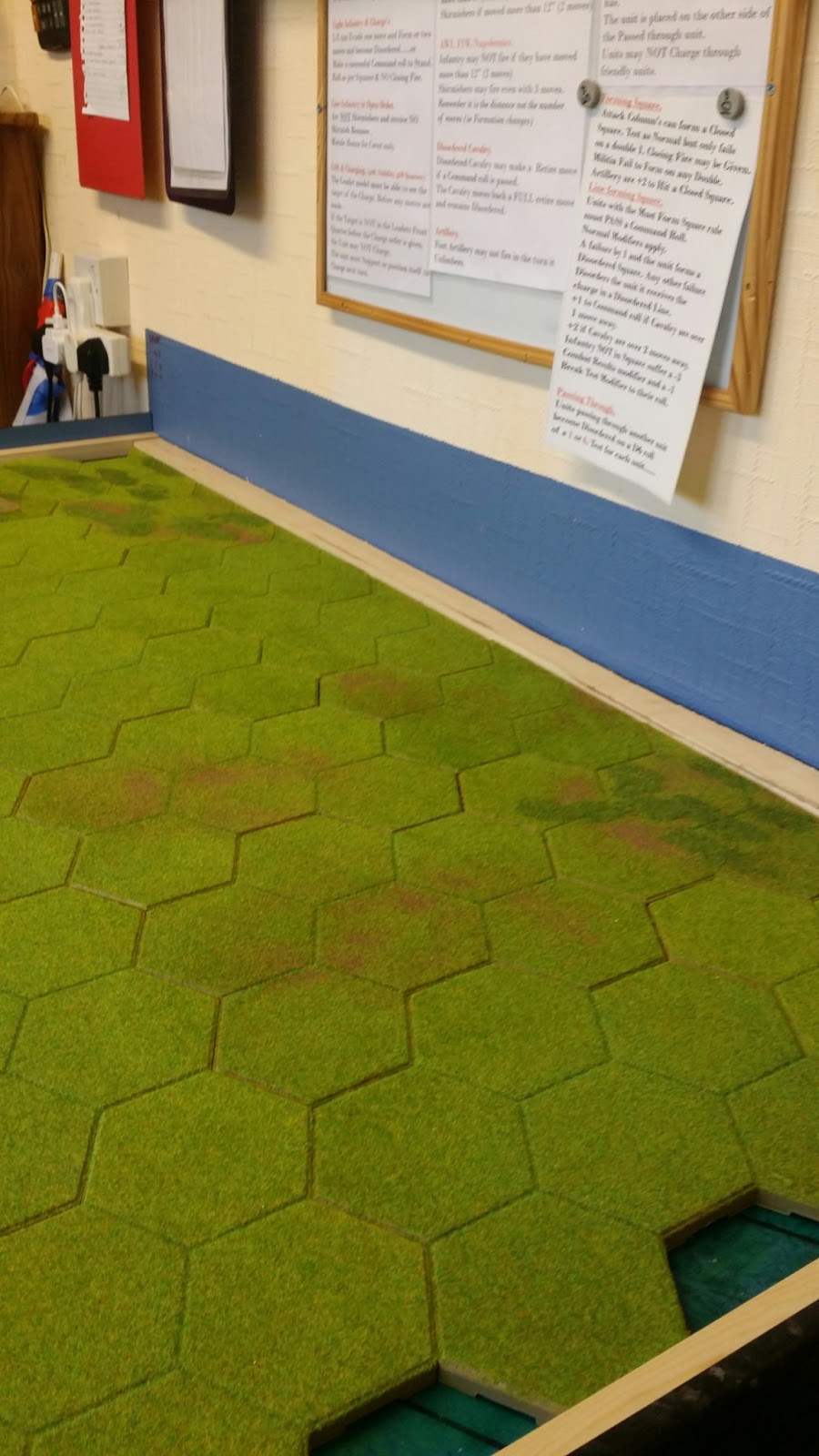 All cut in things were going well. 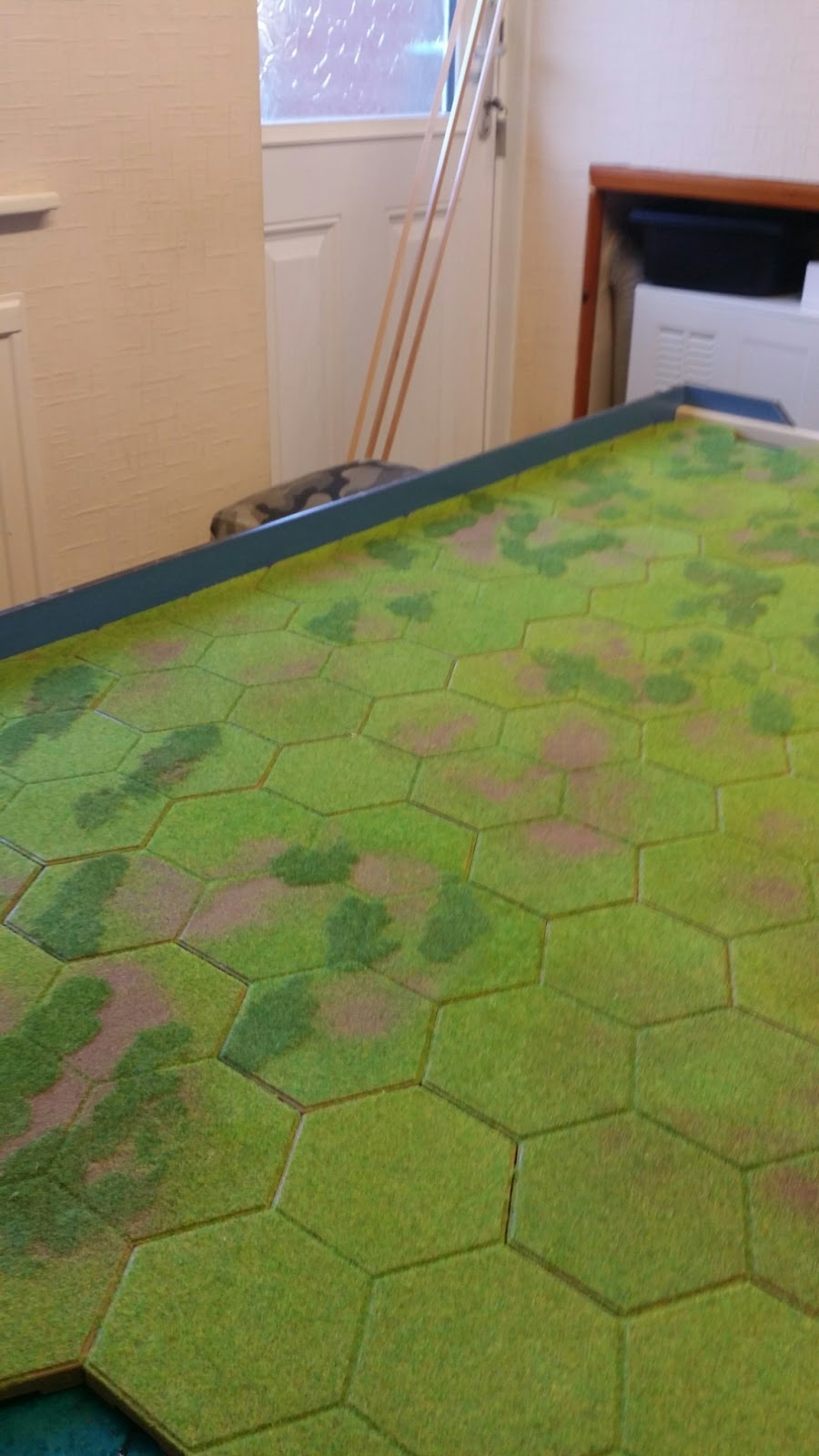 Opposite end completed. The only negative we had on opening all the boxes was the half hexes for the remaining sides had been cut for us unfortunately the wrong way for us to use them. So a quick phone call resolved this and we await the Royal Snail to arrive with the goods. 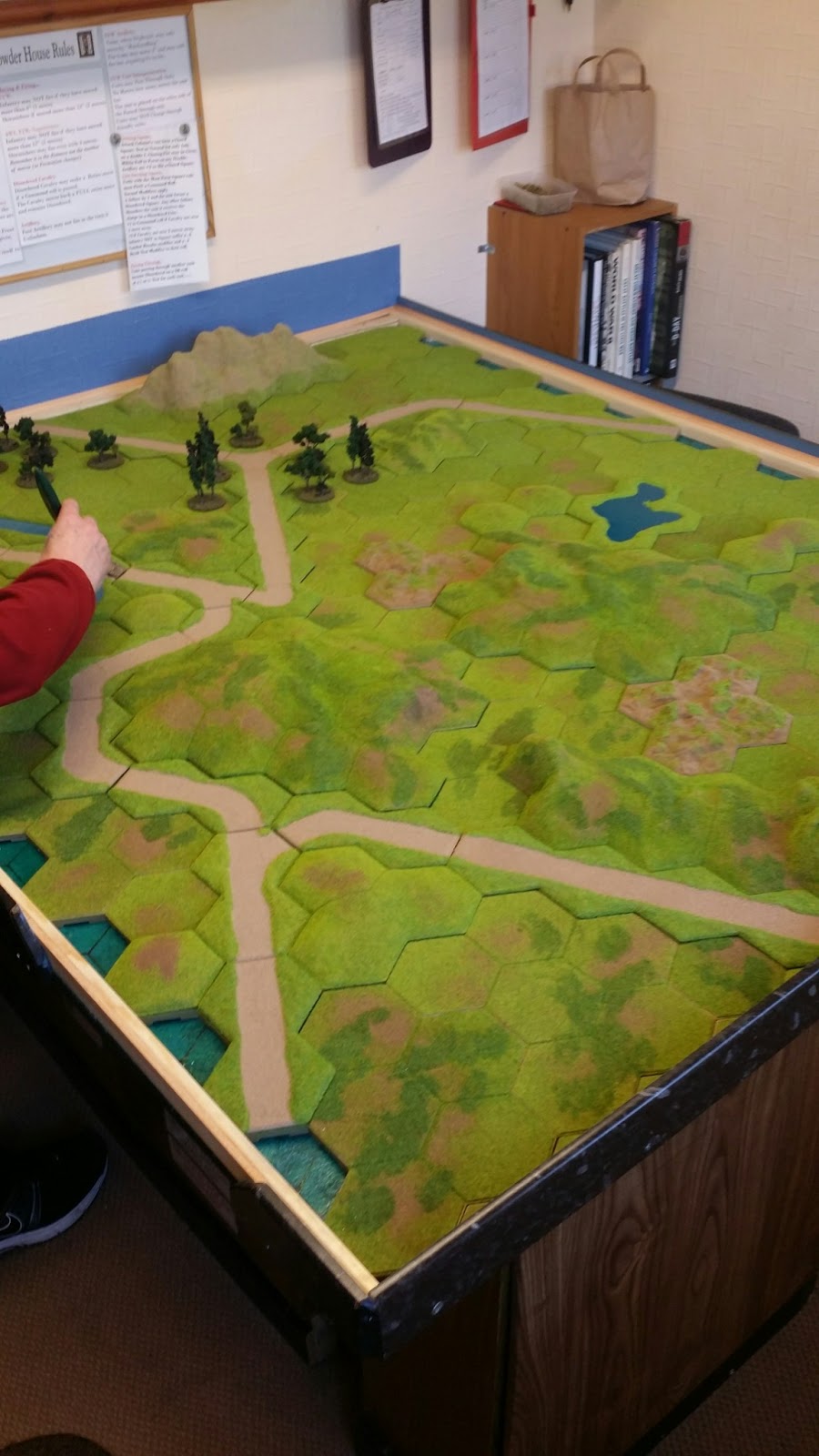 Now it was time to play with the added extras we had bought, we have invested a substantial amount into roads streams and a variety of hills to complement the terrain. 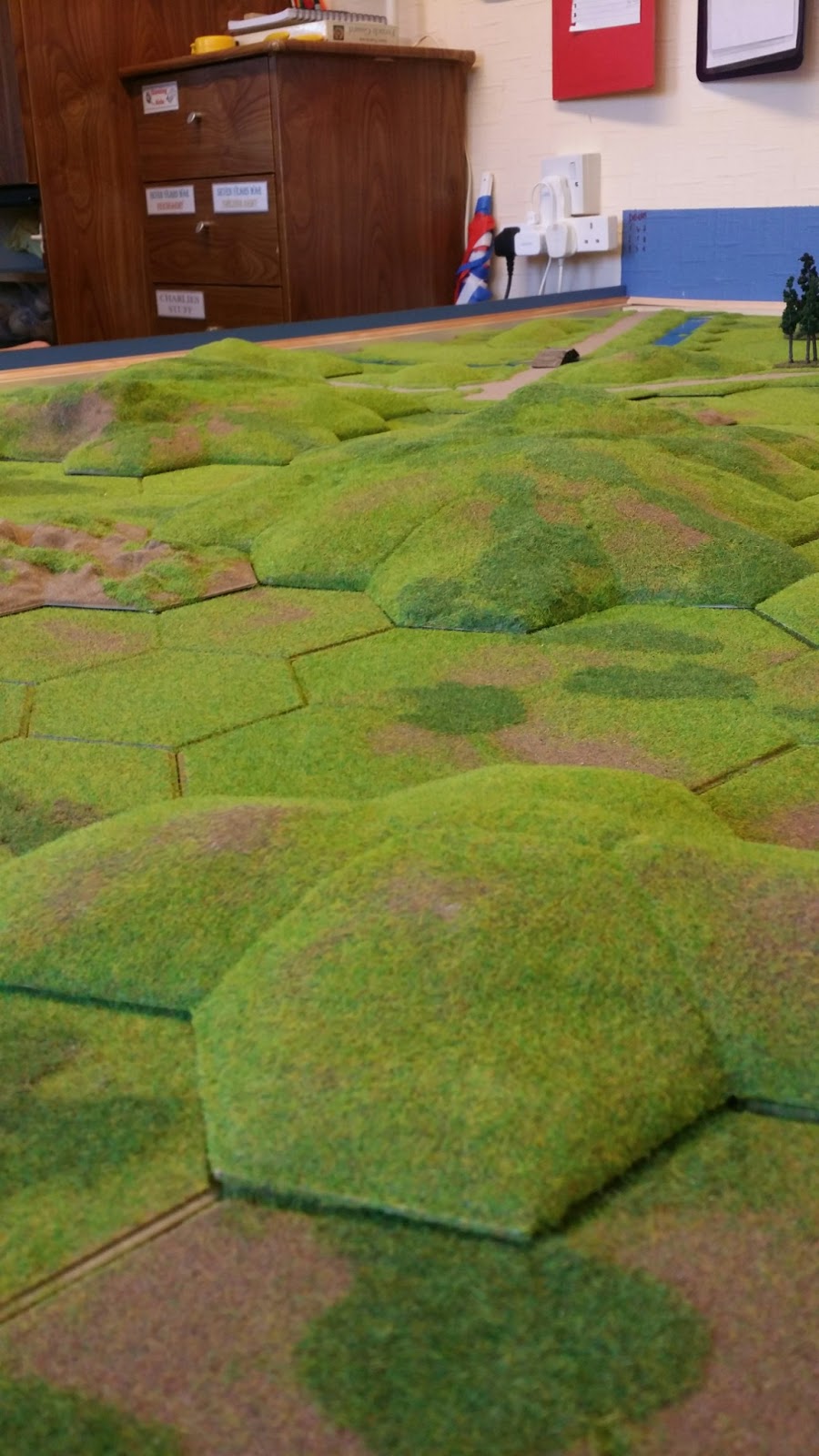 we have been impressed by how this transforms the battleground and although the hex pattern can be seen once set out as a full table they dont stand out as much. 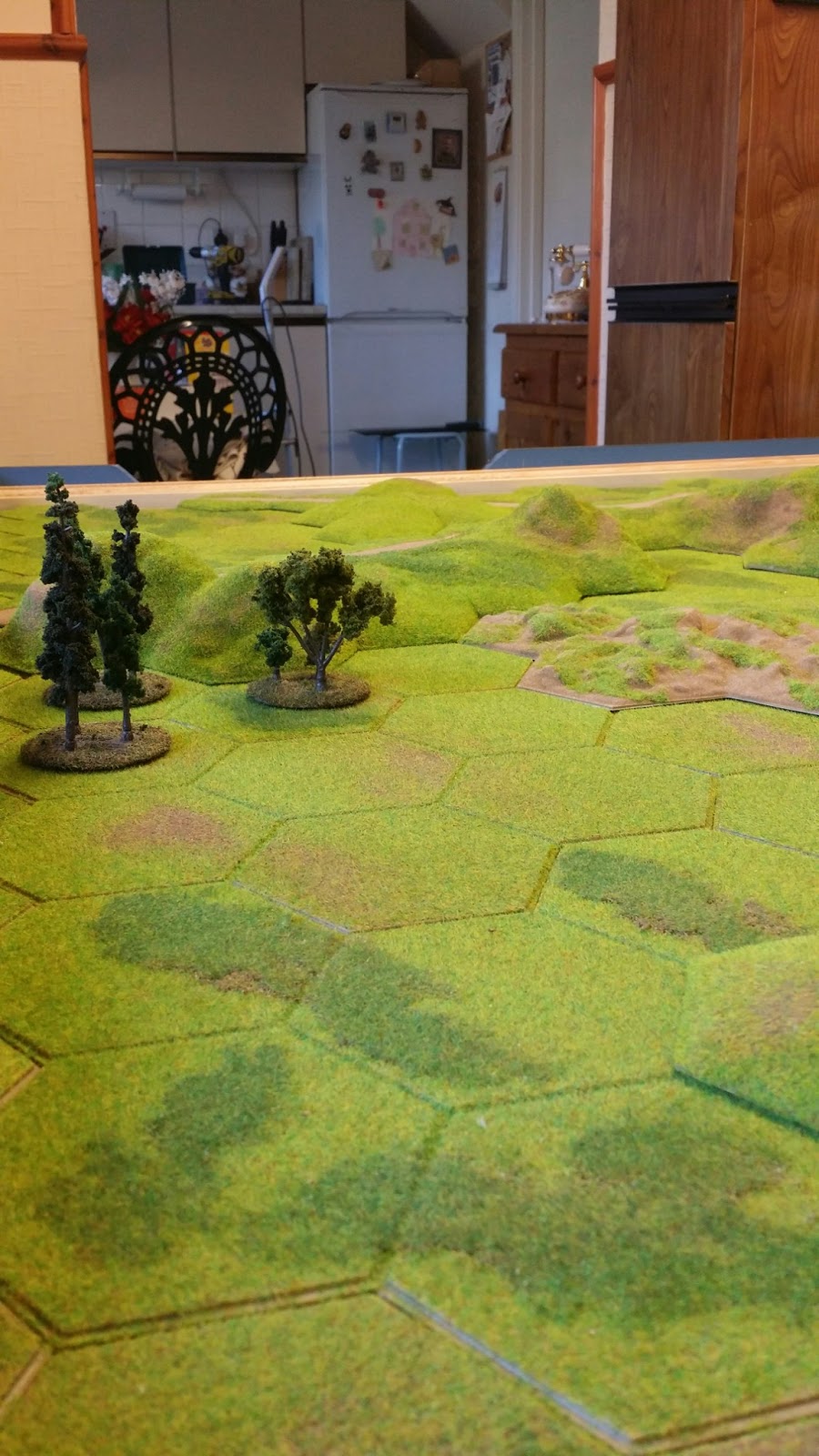 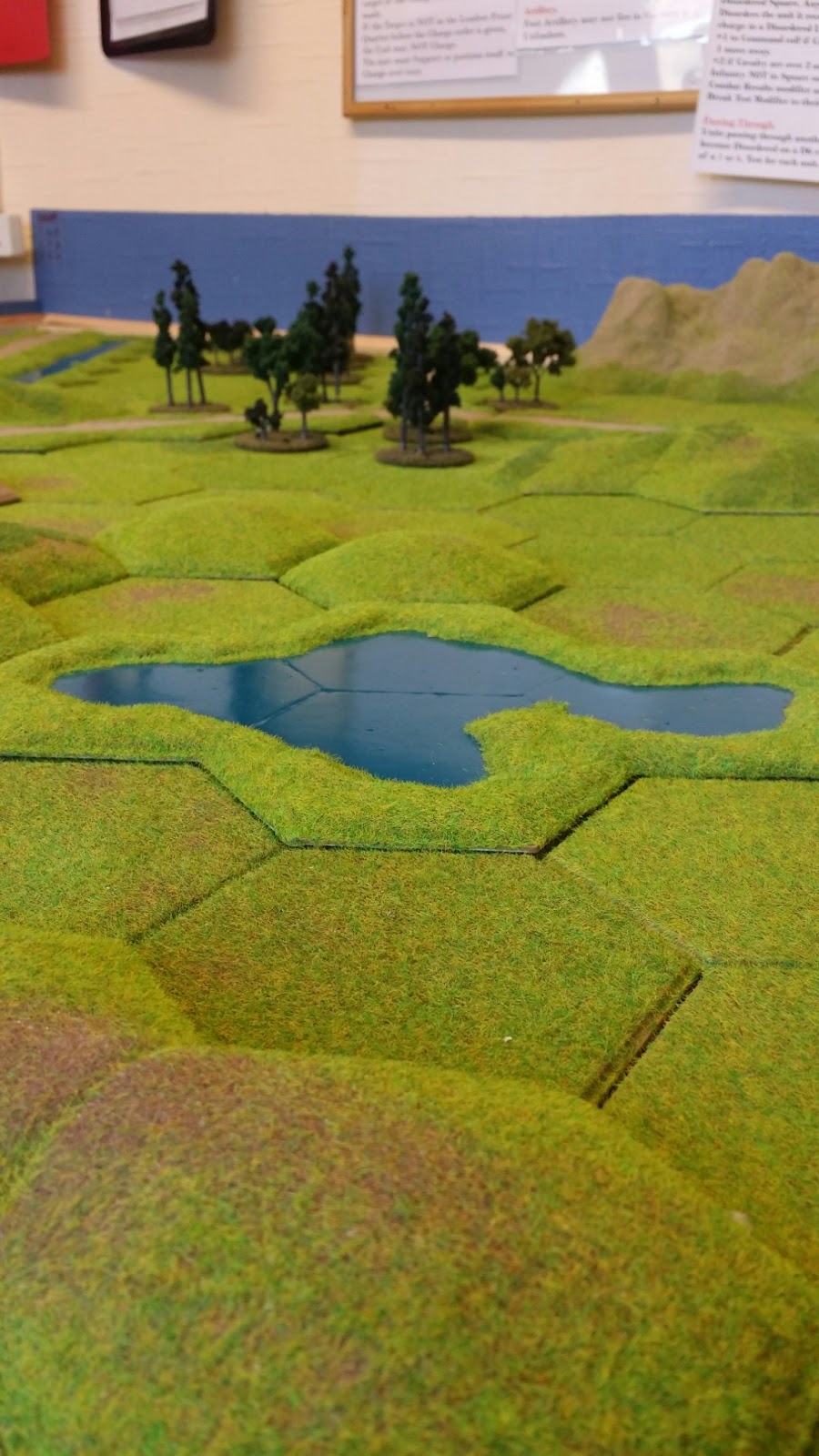 We bought a few of these lakes but I have plans for these and they wont stay like that for very long. 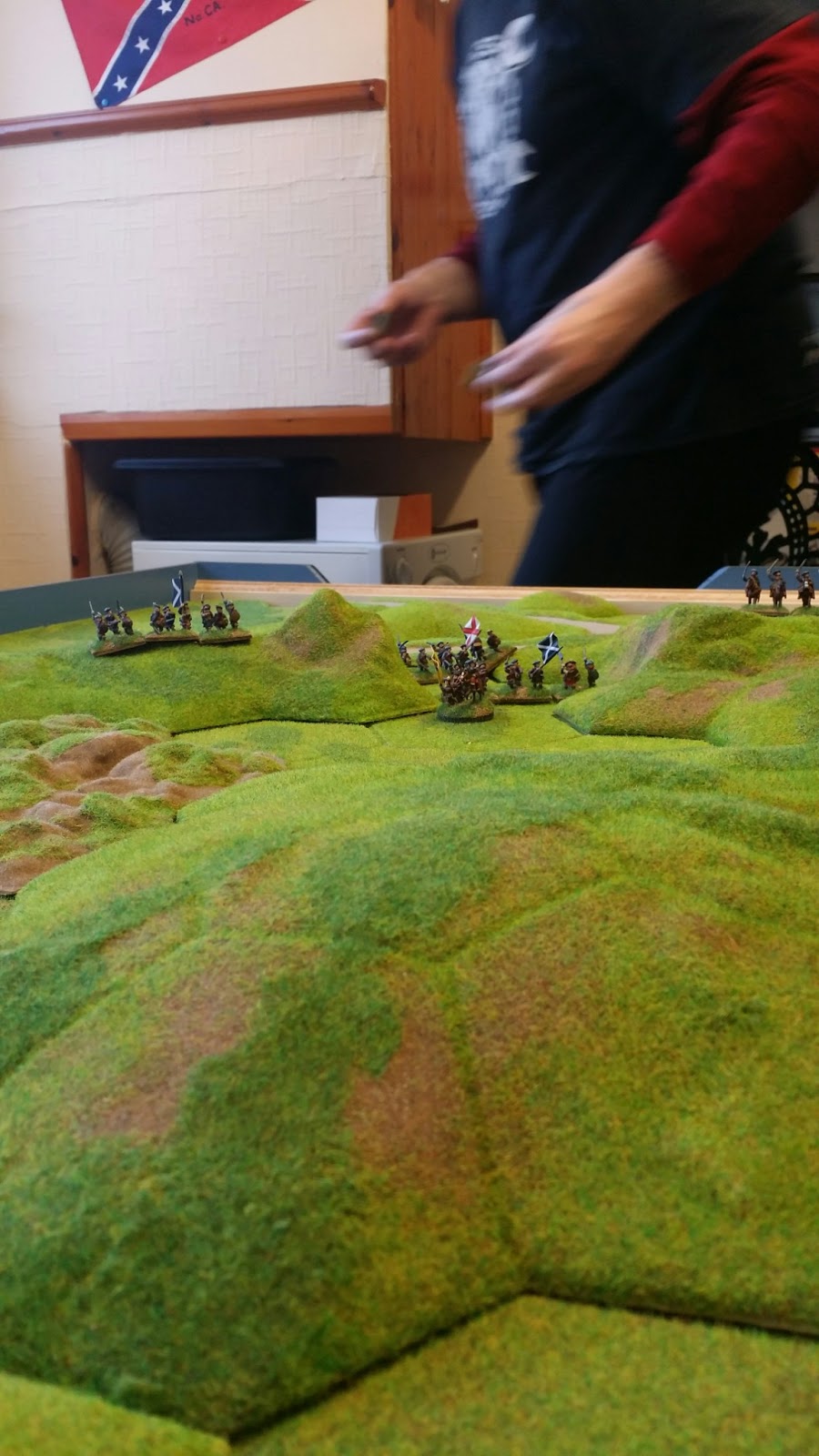 It was not long before Kev started dribbling out of the corner of his mouth and the figure draws were opened for a look at how the minis would fit into the table. 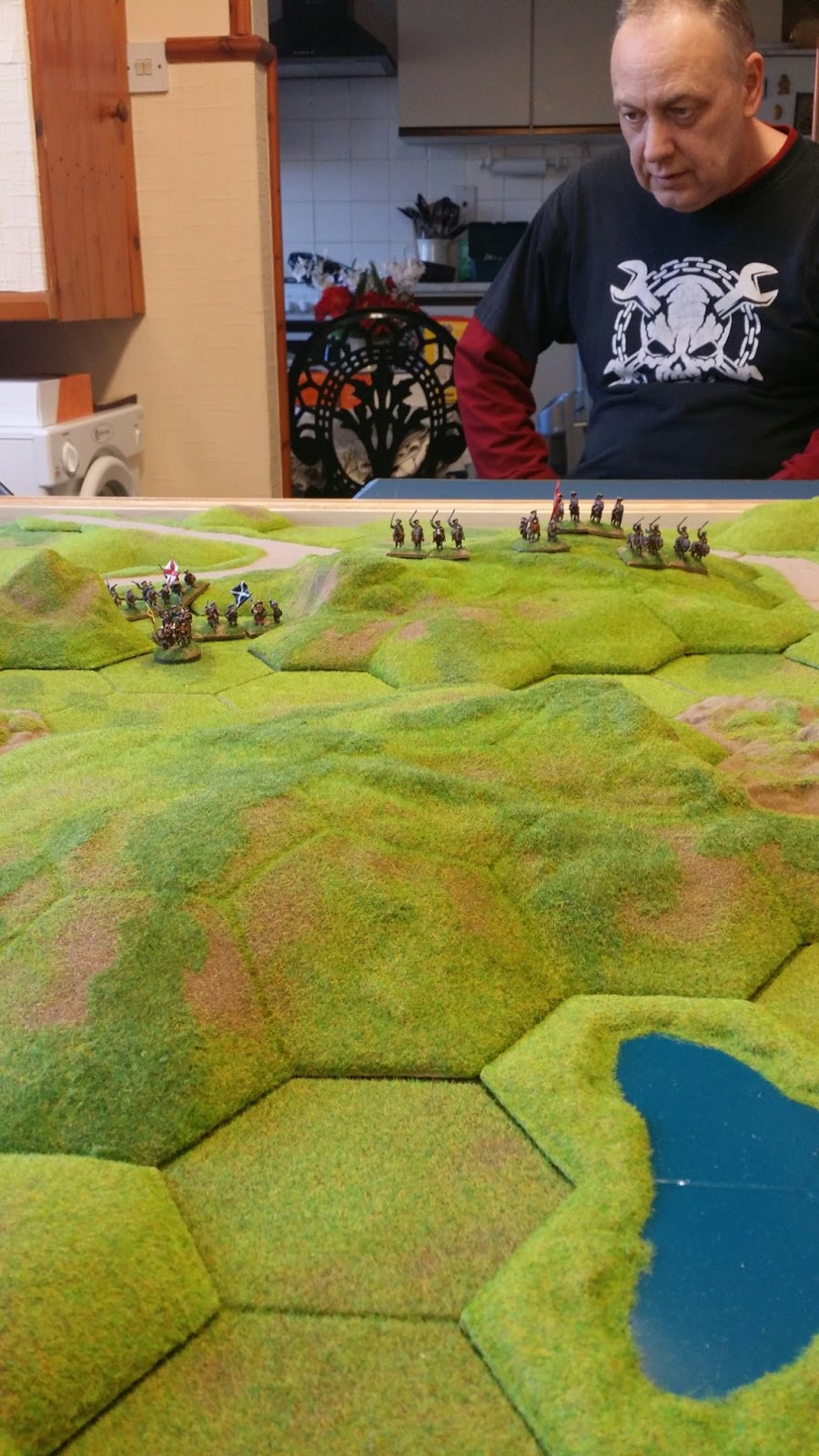 That rare moment when Mr Howroyd is so deep in thought you can actually see those cogs engaging as he start planning a battle and what he could achieve if he had some luck with the dice.

Once again thank you for taking the time to stop over here and have a read. 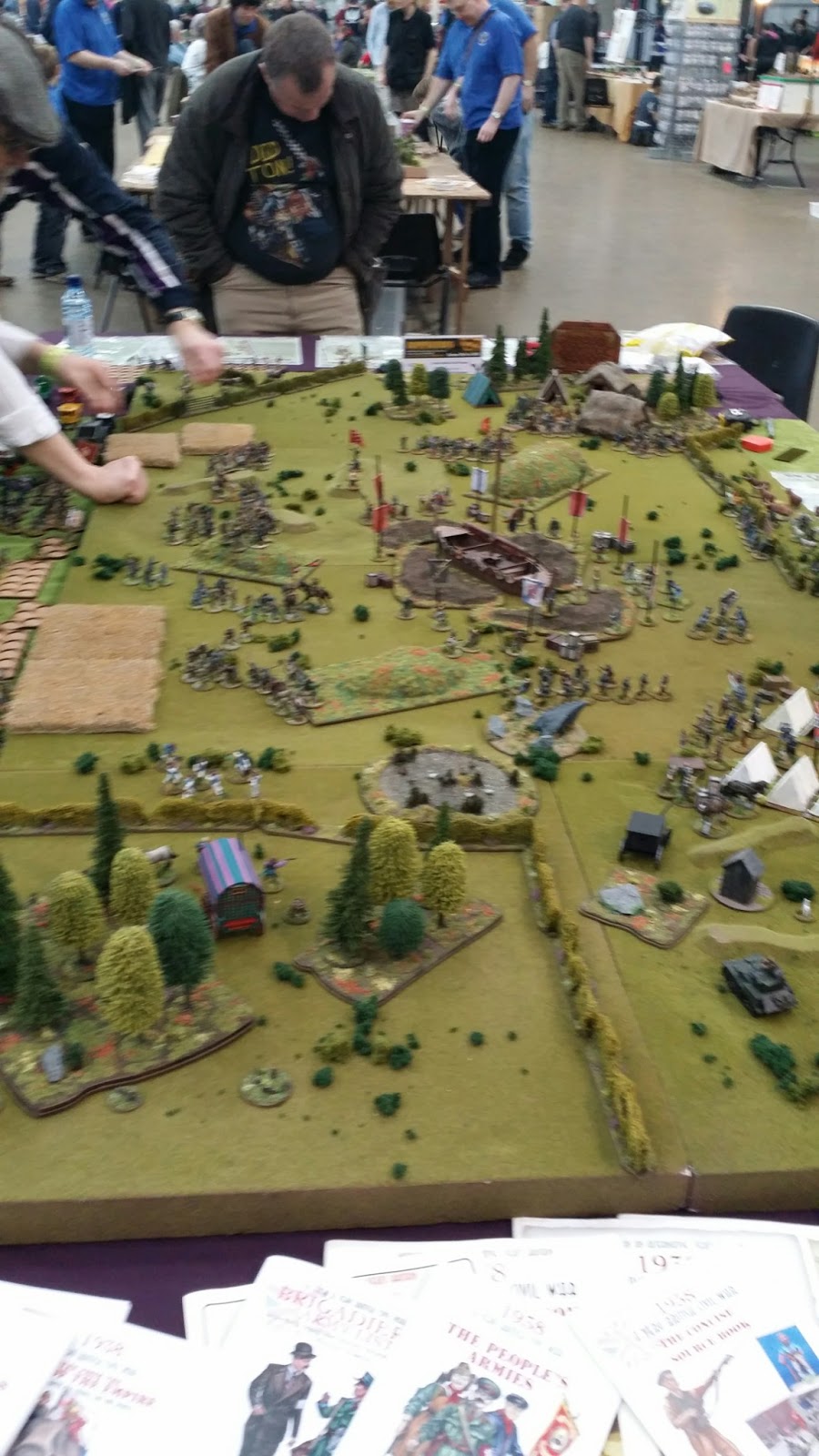 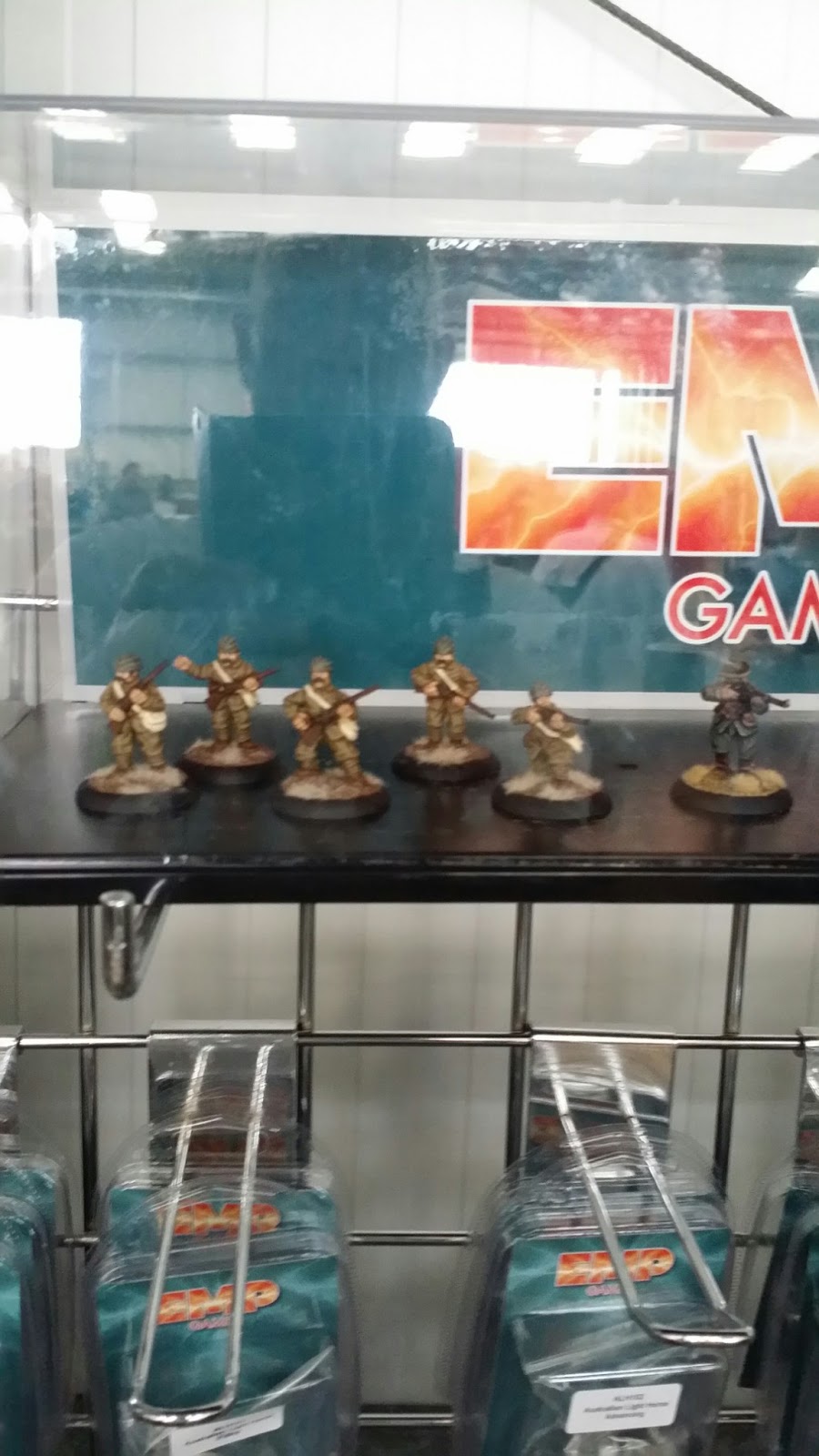