Now these guys should need no introduction to many of you out there, producers of excellent wargaming and military history publications. To those that are not familiar with the name they publish Wargames,Soldiers and Strategy, Ancient Warfare and Medieval Warfare.

So why am I going to blather about this company well its a two fold story really. Firstly I want to say publicly a huge thank you to Jasper Oorthuys, who came to my rescue the other day as I was desperately trying to work out a) my password to the shop and b) where my subscriptions details were. You see this losing memory thing is causing havoc with everything, as I remember bits of info but never quite seem to grab the full picture. Cue pop up chat box and Jasper came to the rescue, after a chat he had all the info needed to sort everything out and get it back in order for me. Monday as promised it was sorted and I even got a personal email telling me exactly what I had got wrong. Now thankfully everything is in one place.

Which leads me nicely into part two of this post as Karwansaray are looking to branch out and publish a new magazine based on the wider ancient history not covered by their current publications.
the first post about this can be read here: http://www.karwansaraypublishers.com/pw/ancient-warfare/blog/survey-for-a-new-magazine/

there is some additional information here: http://www.karwansaraypublishers.com/pw/ancient-warfare/blog/an-update-on-the-ancient-history-magazine-survey/

Finally and most importantly of all they would like feedback on the venture so please spare 5 to 10 minutes of your valuable time and help out by completing the survey if you have not already done so.
https://www.surveymonkey.com/s/S2Z5NN6

Thanks for stopping by folks
Posted by Loki at 10:43 4 comments:

Aiming for an easier life...

Since I began writing the blog life has changed a lot through it. The road has been somewhat lumpy though I have made and met a great many new friends which is a really positive thing. The downside is my continued poor health, I wont be dwelling on that though. So whats a man to do to balance everything out well its going to start here, the blog is going back to its original intention and purpose. It will be used to document my workbench and the progress on various projects in the months and years ahead.

There will still be reviews or sneak previews of products, but they will not be as prevalent as before. I have a full paint desk for many months ahead and I need to focus properly on work for Brigantes Studio as that is my source of income. She who must be obeyed along with the head doctor have clearly stated I need down time, and to lighten my schedule in order to properly gain focus. So somethings have to give, the blog is one of the victims of this as it does become a huge time swallower when you are posting 4 to 5 times a week as I have in the past. I have reorganised all my schedules and am happy with what I have cut out and what I have left in to get time to sort things.

I have not blogged very much of late as I really did not have a lot to say, I took and extended winter break that did not see me return to the brushes until most of January had passed anyway.

I have been busy though getting a few of the smaller projects completed, as I have a deadline with Her Majesty's Inspector of Taxes to hit before the month end that I had forgotten about and the penalties for missing that are harsh, so much of my time is being wasted on getting the books updated and my tax return filed on time. I have realised carrier bags, boxes and drawers are a real issue when they get stuffed with bits of important paperwork as well as general post, lots of sorting out to be done. I really must be more organised in that department.

One of the small side projects I am currently working on is a set of 5 Murawski Miniatures, these are a group of 5 officers and ADC's that I am doing for a fellow blogger in exchange for an expansion to my library. 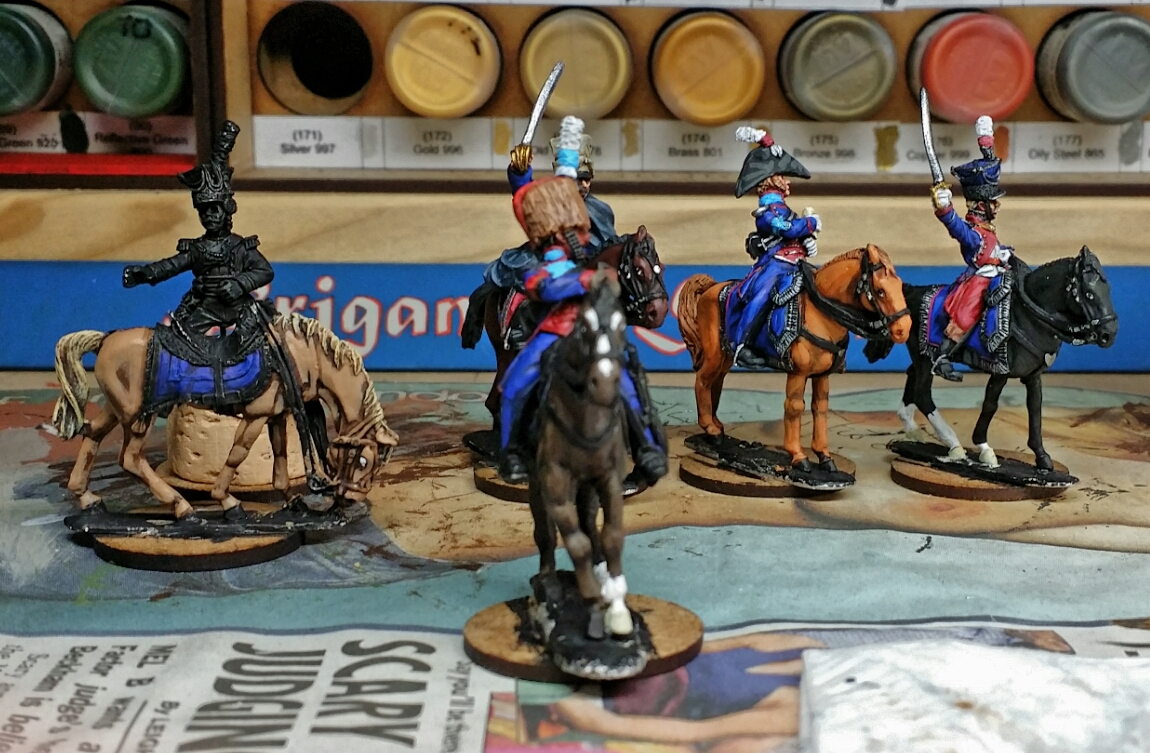 Not the greatest photo in the world I seem to have forgotten how to use the upload thingy properly in my absence. and hopefully by the time they are finished I will have worked everything out nicely.

Right folks thats all for now