It has been a while since my last post, albeit slowly recovery is getting there and I have been busy working away at some items for both Brigantes Studio and Warbases recently. I am acutely aware that Warbases Wednesday has been Awol. It will return shortly, I make no excuses for its absence as my mind has been fully focused on product development for Brigantes Studio more on that later in the post.

I have taken a chunk of personal time this last month on advice of my head doctor. I apologise to many of you if I have been a bit distant and not popping up as often as I would normally. I am sure old Loki will be firing on all cylinders soon. To that end I have also decided that this year I will not be taking part in the Analogue Hobbies Winter Challenge, I would love to fight for the crown again but I know that it would serve me ill to partake in the event this year. I shall however be following it with a very keen eye as it is the highlight of the year for me and a lot of excellent work is showcased to the world through it.

So what have I been up to, well I have continued working on the Russian Napoleonic Army for my own gaming and several battalions had their noses bloodied this week in a game with Kev at the Cabin. In fact gaming on a Thursday has been the only regular event for me of late. When I started building the Russian Force it led me back to my favourite period, their is something about Napoleonics that always draws me back. I have also had a large Russian army before so have a fair amount of notes and knowledge on the troops already but I have been reading a lot more recently and carrying out a lot more research into the army. Its a complicated force due to the constant changes that were regularly put into place throughout the period and researching the correct flags is an even harder task, but I have been reading several very interesting newly available sites thanks to Russian archives being more accessible. To that end I have been creating a range of flags for Napoleonic Armies that will be released through Brigantes Studio in the hear future.

Now I have not just concentrated on the Russians, in fact I have already begun work on several different armies. Poland, Switzerland, France (1804 pattern) and Wurrtemburg to name a few so far. Why have I done this well I discovered a severe lack of good quality 15mm flags for the period, I spend a lot of time on the figures and want it to be topped of with a nice standard when I can get them. Below is a sample of one of the Wurrtemburg standards that I have completed. Obviously I have copy protected this image while we sort out the fine details of making them commercially available. 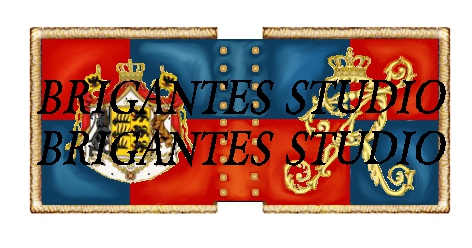 I have found that making the flags although hugely time consuming and often tedious, has been of some benefit to me personally as it has certainly made me focus on the matter in hand. To that end I decided to make a small set of flags freely available for non commercial use to visitors to this blog and have created a set of Dark Age banners that are already scaled to print out at both 15mm or 28mm scale. Just click the image below and save them from the new window. 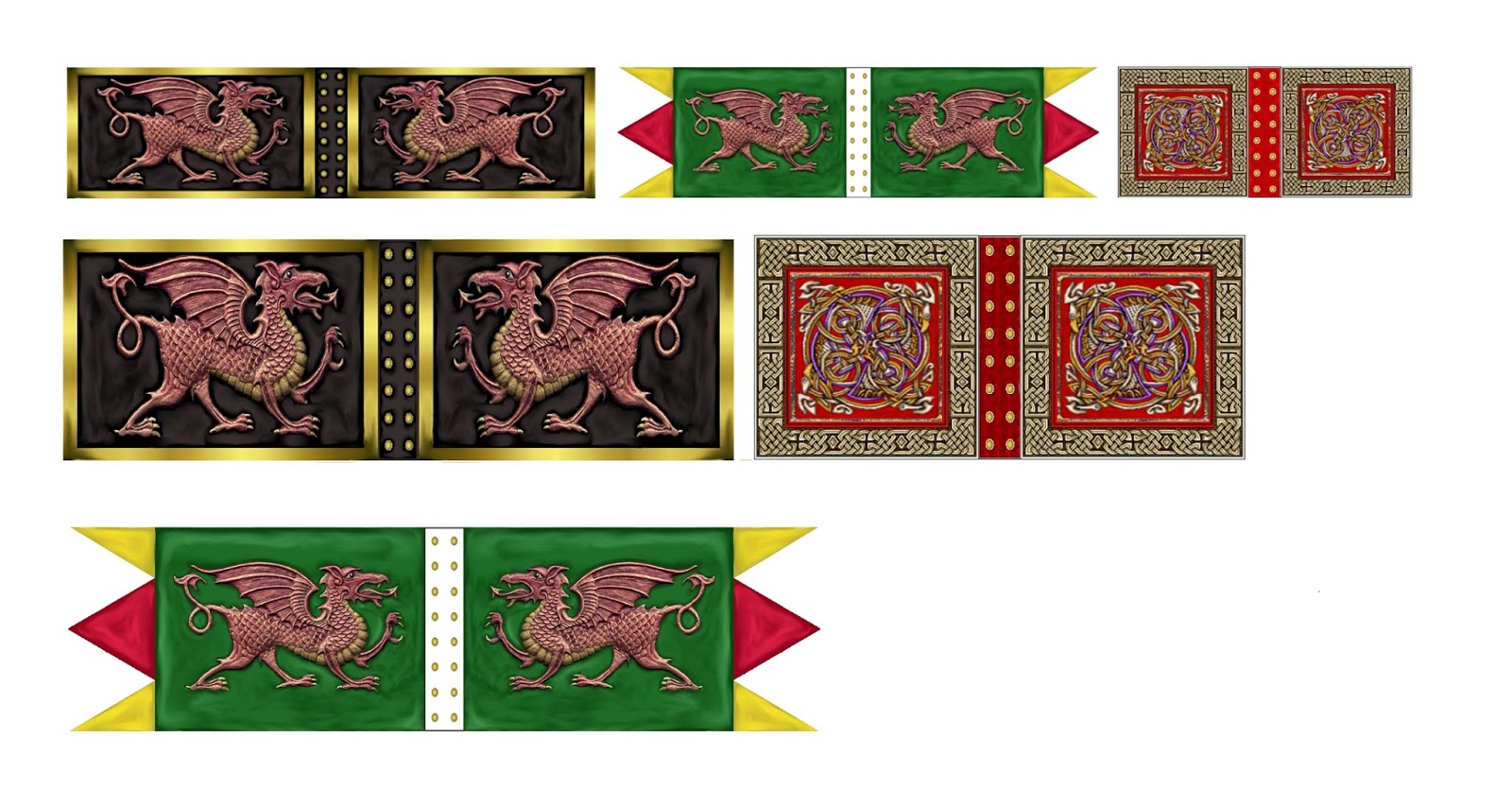 Well good people it is time for me to end this post. I hope to be back regularly soon.

Well I do hope you are all well and ready for a proper post from me after the last few weeks of nothingness.
I am recovering but not as fast as I hoped but I have been tinkering in the background working on several projects. Today I have completed working on several AB Miniatures Russian Napoleonic units that will be going on E-Bay tonight. You will be able to see the listings in the tab at the top of the page after 7pm tonight.

I have reworked large parts of the figures as they needed a tidy up and application of the correct divisional colours. The flags are all my own work ( and may be sold via Brigantes Studio in due course) as I have been done a lot of research over the years and wanted the units to carry the correct standards, Russian practises with these are rather complicated to say the least.

So above is the 1st Battalion Count Arakayev Grenadiers and below is the 1st battalion Lieb Grenadiers these formed the 2nd Brigade of the 1st Grenadier Division in 1812.

The 3rd Brigade in the same division comprised the St Petersburg Grenadiers above and the Tauride Grenadiers Below.

I have also completed the rebasing and reconfiguration of a Jager Battalion (below).

No I am not done yet in fact not even half way through yet!!!

I then took a break from the infantry for a while as I had to completely repaint two Dragoon regiments.

Once I completed these it was back to lots more infantry!!!

and just because you can never have enough Infantry when playing as a Russian I completed the collection with the Pskov infantry because I liked the flag.

Well you have made it to the end of this post, I hope to be back more frequently from this point forward.

Warbases Wednesday #31 - Beyond the casualty marker

Sometimes the simple designs are a real game changer and while I was at Derby this weekend Martin revealed a small project he had been working on involving the highly popular casualty markers. This was a winner in my book and something that I just had to bring to your attention as a priority this week! 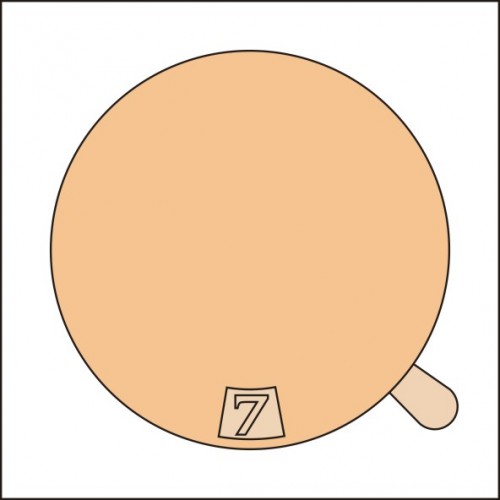 For 60 pence these casualty markers are just a very handy item to have for any game. I have put many of these in bags this year when I have been working.

However Martins' latest idea truly takes this beyond just a casualty marker and into the realms of a must have item.

Add a 16mm dice cell to the top of the dialler and you have a whole new piece of kit to play with. 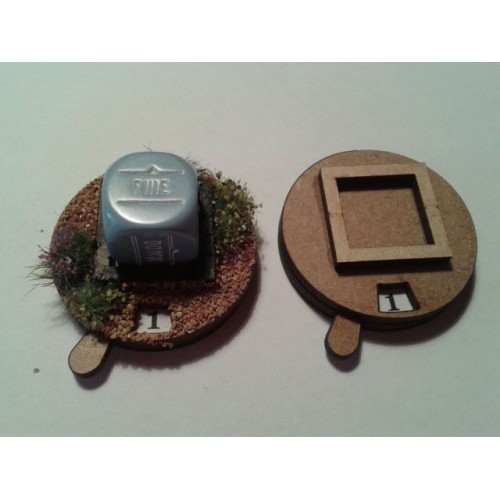 But he did not just stop there, now there are acrylic tokens to insert into the cells to make this a multi purpose gaming item. 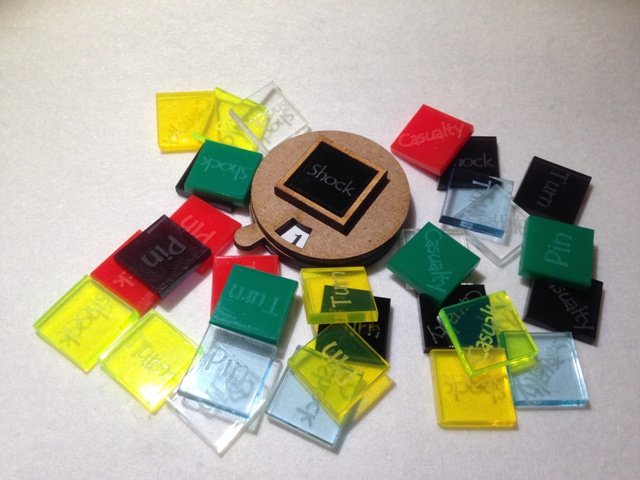 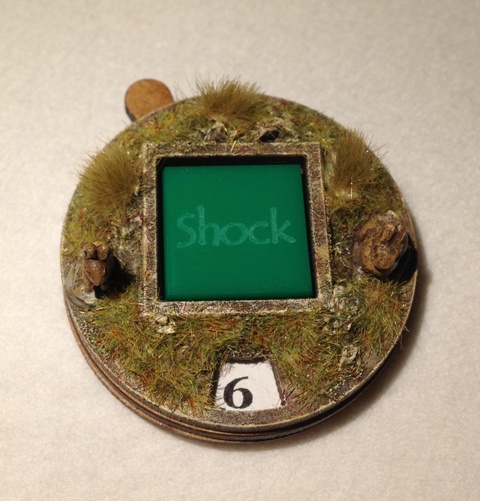 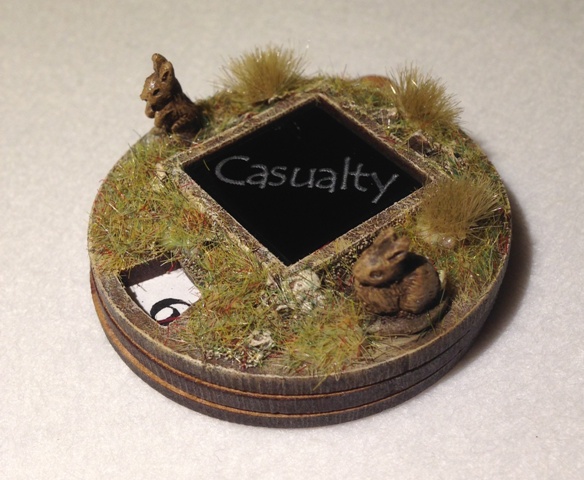 Available in packs of 6 for £1.20- Text available - Shock, Pin, Turn, Casualty with a choice of acrylic colours. Now I would also point out that if you use other words these can be custom etched for you for a small surcharge just send Diane an Email to sort that for you.

Well good folks that wraps up this weeks edition.

Please note all image in this post are copyright to Warbases and I have been given permission to use them for this weeks post.

Recently I had a timely reminder of just why I base on MDF as opposed to any other medium. I like many have used many alternatives in the past, cardboard, artboard, metal and plastic but all of these have built in problems.

A couple of weeks ago I got together all my unwanted figures and things I was never going to get around to painting and after some searching on the Internet I traded this for an entire Napoleonic 15mm Russian army. The downside to all this was although it has a good paint job the bases are pretty much shot and certainly not to my taste.

So what do I mean shot, well one look and although they have been based on good quality art board (a kind of thick card) they are nearly all warped from the original application of filler that was applied or through the passage of time. Many of them also have started to de laminate where the corners have been knocked over the years. 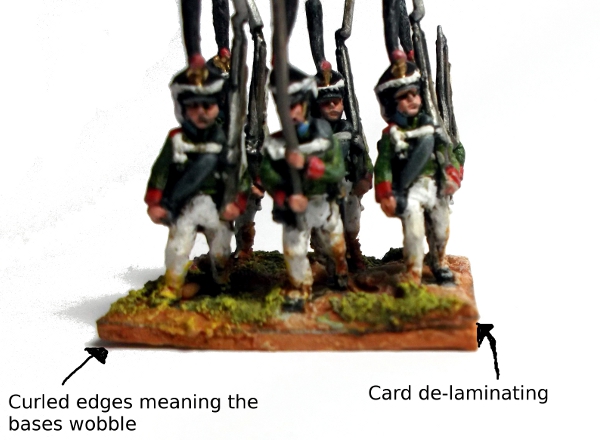 The photo above shows exactly what I am talking about, and it will only deteriorate further in time.  I have used Plasti-card in the past but this is too thin and can be a bugger to get stuff to adhere to it. So my base of choice is MDF. Yes it can warp in large sheets, or through water penetration but it is very stable at bases sizes and the process of basing will not make the MDF wet enough to warp at all.

Yes it does cost a bit more to use these bases but what price for peace of mind and a good solid base for our toys. 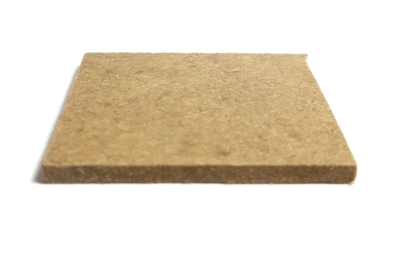 It all began here for Martin. Running his operation on a part time schedule and supplying us gamers with bases for our toys. I have watched this grow from that part time venture into a very busy home business that continues to grow and prosper but its always assuring to know that what ever the steps taken going forward are. The company started and took its name from supplying quality bases and will continue to do so.

The company also supplies any 2d shaped base you want, just ask and they will cut them for you a godsend, for me in the fact that I don't have to spend hours using a compass to draw circles and a scalpel to cut them all out. I can just order a bag of them pre cut to the sizes I want.

This for me is money well spent as it saves me time and once finished looks as good as the figures that top it all. With prices at £1.10 per pack for the standard sawn bases or £1.75 for laser cut ones I never fail to be happy with the products. 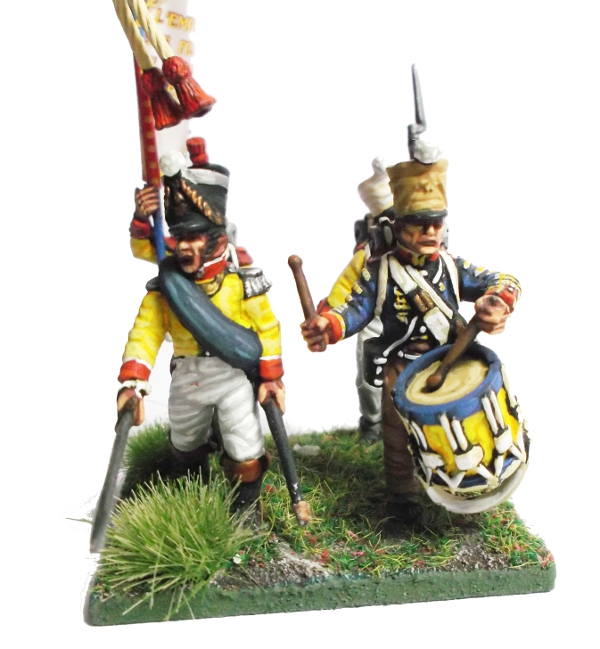