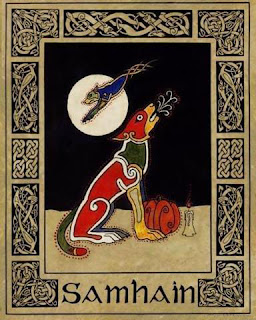 Halloween is a holiday with ancient roots that had a much greater meaning than the boisterous, costume-filled holiday that we know today. Nor is it an occasion of American origin.
Around 2,000 years ago, the Celts, who lived in what is now the United Kingdom, Ireland, and northern France, had a festival commemorating the end of the year. Their New Year was November 1, and this festival was called Samhain, pronounced sow-en. The end of their year signalled the end of summer, the end of the harvest season, and the beginning of a long, hard winter that often caused many deaths of animals and people. Weaker livestock were often killed and eaten during this holiday, since most likely, they would not survive the winter anyway. Because of this, and the cruel winter to come, this time of year signified death to the Pagan Celtics. They believed the night before the New Year, that the wall between the living and the dead was open, allowing spirits of the dead, both good and bad, to mingle among the living. Some of these spirits were thought to possess living people, cause trouble, ruin crops, or to search for passage to the afterlife.
Samhain was considered a magical holiday, and there are many stories about what the Celts practised and believed during this festival. Some say the spirits that were unleashed were those that had died in that year, and offerings of food and drink were left to aid the spirits, or to ward them away. Other versions say the Celts dressed up in outlandish costumes and roamed the neighbourhoods making noise to scare the spirits away. Many thought they could predict the future and communicate with spirits as well during this time. Some think the heavily structured life of the Pagan Celts was abandoned during Samhain, and people did unusual things, such as moving horses to different fields, moving gates and fences, women dressing as men, and vice versa, and other trickeries now associated with Halloween.
Another belief is that the Celts honoured, celebrated, and feasted the dead during Samhain. A sacred, central bonfire was always lit to honor the Pagan gods, and some accounts say that individual home fires were extinguished during Samhain, either to make their homes unattractive to roving spirits, or for their home fires to be lit following the festival from the sacred bonfire. Fortunes were told, and marked stones thrown into the fire. If a person's stone was not found after the bonfire went out, it was believed that person would die during the next year.
Some Celts wore costumes of animal skulls and skins during Samhain. Faeries were believed to roam the land during Samhain, dressed as beggars asking for food door to door. Those that gave food to the faeries were rewarded, while those that did not were punished by the faeries. This is reported to be the first origin of the modern "trick or treat" practice.
Posted by Loki at 20:07 4 comments:

I have a busy few days ahead so wont be able to do any more painting until the middle of next week. So I will take this chance to post an update. I have now completed the first 20 figures save for the basing and shields, the other 8 have progressed and are nearly at the same stage. 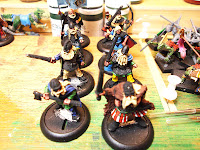 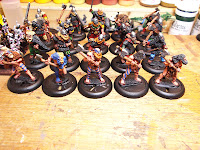 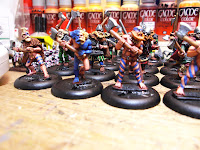 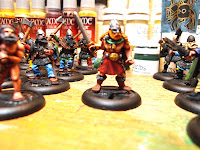 Once I have them all painted I will take some better pictures of some of the individuals, and I will include a good all round set of of Mr stripy pants for Ray.

New look for the blog

I have given the blog a minor overhaul and changed the colour scheme to a more eye friendly set of colours.

The keen eyed among you will have spotted two new pages. Having been emailed a couple of time about any figures I may be selling I have created a page that links directly to my Ebay auctions.

I also found an old file that contained some earlier painting of mine and have uploaded the images to a new gallery page.

I hope you like the new look please tell me if you dont and I will revert back to the old style.

Moving along nicely now, I had a couple of hours spare this afternoon so set about making a banner for the commission figures. 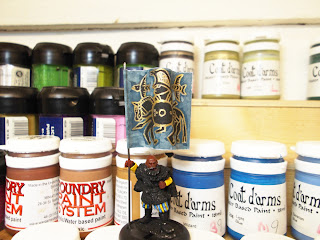 I decided to use an image I stored on my pc a long time ago, its Woden on his 8 legged horse flanked by ravens. I used a faded blue/green background and picked the main details in gold and body in black for contrast.

I have moved 20 of the figures on a lot and only metalwork remains to be done on these. The berserkers are at the same stage and look quite nice. 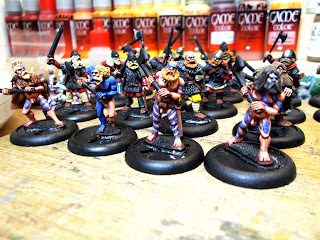 I really enjoy this period as it allows good artistic freedom in colours and patterns.
Posted by Loki at 18:33 5 comments:

Progress on the commission is going well, I paint for pleasure and the terms of the commission reflect that and allow me the artistic freedom I enjoy from bringing miniatures to life.

So far I have de-flashed, mounted onto 30mm round bases and hand under-coated 28 figures. These have all been given their base flesh tone and all the cloth has been taken to the final highlight, I have now started to take the flesh up and working on some nice war paint for some crazy drug fuelled crazy berserkers.

I will take this opportunity to explain my reasoning for painting the berserkers as follows:

The etymology of the term berserk is disputed. It may mean "bare-sark," as in "bare of shirt" and refer to the berserker's habit of going un-armored into battle. Ynglingasaga records this tradition, saying of the warriors of Óðinn that "they went without coats of mail, and acted like mad dogs and wolves" (Snorri Sturluson. Heimskringla: History of the Kings of Norway. trans. Lee M. Hollander. Austin: Univ.of Texas Press. 1964. p.10). Others have contended that the term should be read "bear-sark," and describes the animal-skin garb of ther berserker. Grettirs Saga calls King Harald's berserkers "Wolf-Skins," and in King Harald's Saga they are called ulfhedinn or "wolf-coats," a term which appears in Vatnsdæla Saga and Hrafnsmál (Hilda R. Ellis-Davidson,"Shape-Changing in the Old Norse Sagas," in Animals in Folklore. eds. J.R. Porter and W.M.S. Russell. Totowa NJ: Rowman and Littlefield. 1978. pp. 132-133), as well as in Grettirs Saga(Denton Fox and Hermann Palsson, trans. Grettir's Saga." Toronto: Univ.of Toronto Press. 1961. p. 3).
It is likely that the berserk was actually a member of the cult of Óðinn. The practices of such a cult would have been a secret of the group's initiates, although the Byzantine emperor Constantine VII refers in his Book of Ceremonies to a "Gothic Dance" performed by members of his Varangian guard, who took part wearing animal skins and masks: this may have been connected with berserker rites (Hilda R. Ellis-Davidson. Pagan Scandinavia. NY: Frederick A. Praeger. 1967. p. 100). This type of costumed dance is also seen in figures from Swedish helmet plates, scabbard ornaments, and bracteates which depict human figures with the heads of bears or wolves, dressed in animal skins but having human hands and feet. These figures often carry spears or swords, and are depicted as running or dancing. One plate from Torslunda, Sweden, may show the figure of Óðinn dancing with such a bear figure.
Modern scholars believe that certain examples of berserker rage to have been induced coluntarily by the consumption of drugs such as the hallucinogenic mushroomAmanita muscaria (Howard D. Fabing. "On Going Berserk: A Neurochemical Inquiry."Scientific Monthly. 83 [Nov. 1956] p. 232), or massive quantities of alcohol (Robert Wernick. The Vikings. Alexandria VA: Time-Life Books. 1979. p. 285).

The physical appearance of the berserk was one calculated to present an image of terror. Dumezil draws parallels between the berserk and the tribe of Harii mentioned in Tacitus's Germania who used not only "natural ferocity" but also dyed their bodies to cause panic and terror in their enemies, just as the berserk combined his fearsome reputation with animal skin dress to suggest the terrifying metamorphosis of the shape changer (Dumezil, Destiny of the Warrior, p. 141). Indeed, berserkers had much in common with those thought to be werewolves. Ulfr, a retired berserker, is mentioned in this light in Egils saga Skallagrímsonar:

But every day, as it drew towards evening, he would grow so ill-tempered that no-one could speak to him, and it wasn't long before he would go to bed. There was talk about his being a shape-changer, and people called him Kveld-Ulfr ["Evening Wolf"] (Palsson and Edwards, Egil's Saga, p.21). 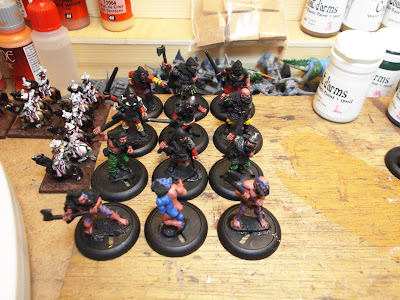 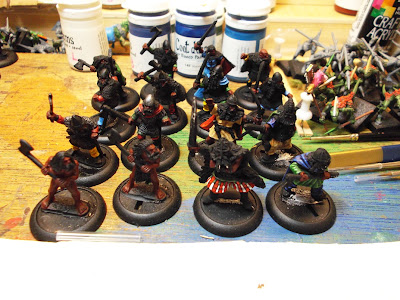 Right thats the first update on the commission completed back to the paints.
Posted by Loki at 17:21 2 comments:

A small find heads to Ebay

Having given most of my spare figures away I was pleasantly surprised on rooting through storage drawers and various hidey holes earlier this week to find more Vikings and Anglo Danes. I have found about 40 figures that are surplus to my needs. Fist up are two rather nice Musketeer miniatures figures, a range of figure I have not painted before but the figures painted up beautifully and are now destined for Ebay tonight.

I was rather happy with the finished look of both of these figures and am tempted to purchase a few more of this range for a different saga force later in the year. 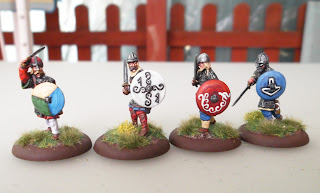 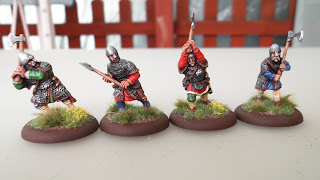 I am always happy to paint Vikings and seem to enjoy painting Dark age figures in general. I decided that I needed to thin out my collection a little and recently gathered together a 6 point force and sold it on Ebay. 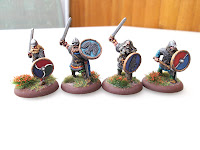 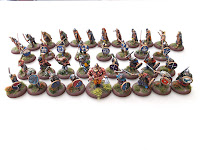 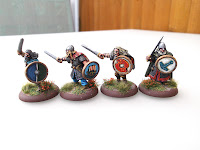 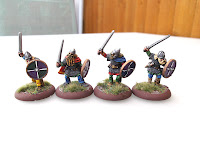 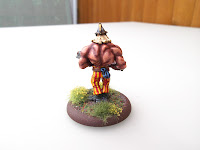 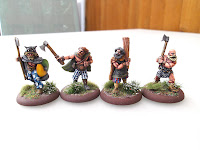 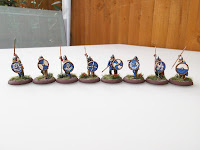 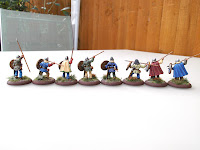 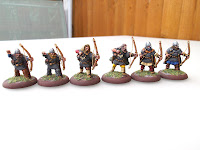 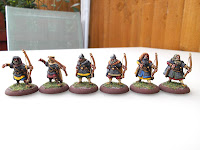 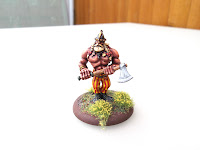 I was more than happy with the finished result and the extra few figures and warlord I had to paint for this were worthwhile. Further to this I have actually agreed to accept my first commission painting project, I have always refused to paint on this basis for anyone, as painting is very much a spare time hobby and as a busy father of two rarely do I get time to paint my own lead. However the customer who purchased these wished me to paint some additional Dark age figures and I really had to agree as I always like all my armies to match.

I will therefore be using the blog to keep me on track with the commission over the next few months and it will give me the opportunity to showcase some more Vikings and Saxons.

Sorry for the lack of updates my mind has been else where for a few months. I have been battling the evils of quitting smoking, and the method prescribed by the quack left me in a state of complete brain melt. However I have beaten the dark side and a 35 year habit has been broken.

On the painting side I have not done too much either, but have completed a 200 point force for muskets and tomahawks, and also written a set of rules based on muskets and tomahawks for the Zulu war, which has had a little play-testing so far and with a little more refinement I will be able to share with you all.

right that's me for now I hope to be a little more frequent with the updates now.
Posted by Loki at 09:51 4 comments: