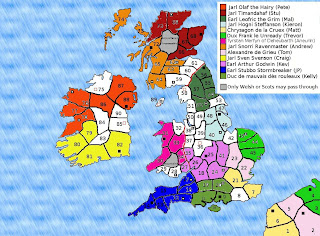 The club campaign is moving along nicely, with the last battle from the 2nd turn being fought on Sunday evening. 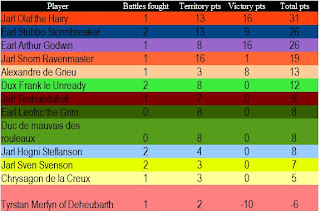 Turn 2 saw battles in Ireland as the two factions forced marched and fought over the territory in 78.
Jarl Olaf the Hairy beat the odds having to play the escort scenario heavily outnumbered by Jarl Sven Svenson. Olaf secured plenty of victory points on his travels this turn to project him to the top of the leaderboard.
Tyrstan Merfyn of Deheubarth decided that now longshipless he was better to consolidate around his home territory.
Dux Frank Le Unready decided caution was the better part of valour and sneeked along the coast of East Anglia.
Earl Leofric the Grim failed in his attempt to subdue a wild tribe encountered on a forced march.
Duc de Mauvais des Rouleaux consolidated his position in the south.
Jarl Hogni Steffanson took territory 40 after a struggle with some wild tribes.
Jarl Timbandahaf consolidated his northerly territory.
Jarl Snorri Ravenmaster (thats me) consolidated his hold on the western edges of Scotland and expanded towards the Lowlands.
Alexandre de Grieu, decided to hold position (he didnt pm a move)
The main conflict of this round was the attack by Chrysagon de la Creux who attacked Earl Arthur Godwin, for territory 24. Earl Arthur rallied his men and sent a messenger to Earl Stubbo Stormbreaker who came to the Earls aid in battle. The combined defense was strong enough to hold the bold Norman attack in check.

Morr or less and a change for the club

First up I have completed the oasis, nothing special just a little bit of greenery to enhance the base. 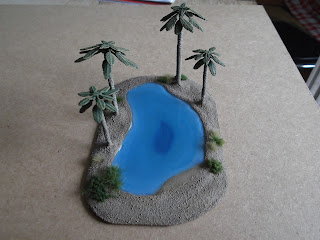 I moved things along nicely with the weekly meet for terrain this week and have done most of the work on the building elements for the Garden of Morr. 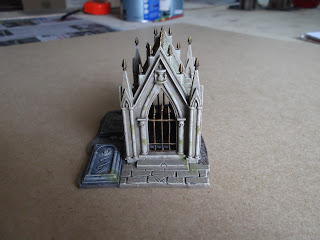 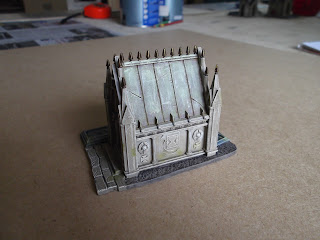 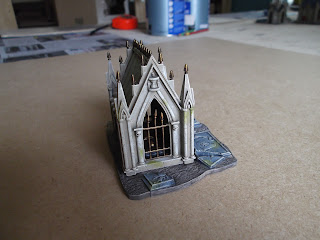 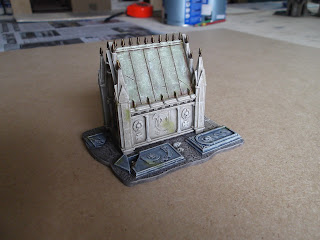 the hardest part of this building was getting the weather worn copper roof looking just right, the final look was obtained by painting the roof with a dark green then washing heavily with a brown ink followed by dry brushing 5 various shades of light green. 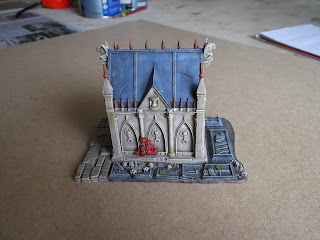 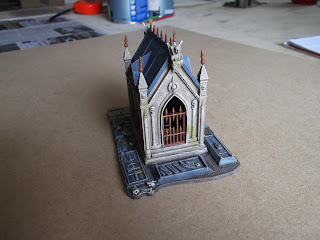 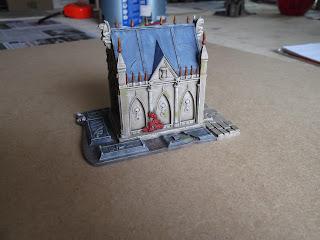 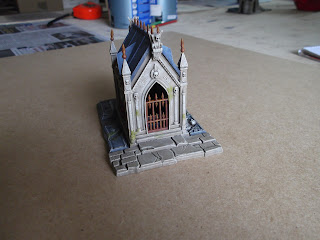 Again the roof took a bit of work but it was much easier to represent the leaded look. 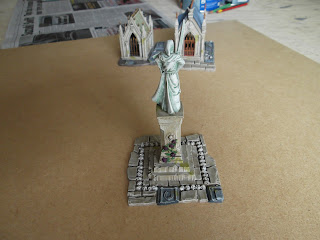 not much to say about this one, a suitably large statue on a column. 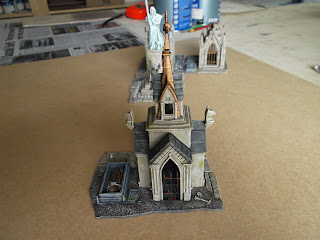 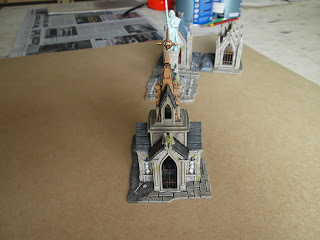 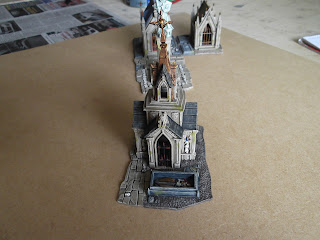 This one was very nice with two types of roofing to work on I choose a slate with bronze look for this. 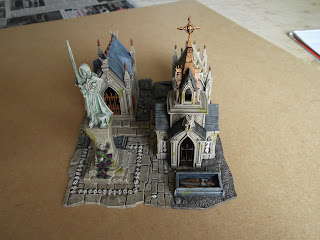 well that's them all together, now I have the walls and railings to work on.

Over the last couple of months the club I game with has undergone some upheaval, with the owners of our usual PH venue informing us they were locking the doors on the night before our tournament and would not be reopening. This caused a major headache as it was too late to stop the event, we got helped with a venue but it saw a large portion of the members assembling at a stupid Hour on a Sunday morning to move all the clubs belongings.
The committee set about the task of finding a new venue, not quite as easy as we thought this would be, we dismissed using a pub again as the last option we should choose when finding a new home.
As luck would have it we found several options to discuss with the members after a couple of weeks searching. After a fun meeting a fairly unanimous decision was reached and we opted for a community centre that was mentioned to me by Kev. This move means a fundamental change in habit and routine as the venue was not available on our usual Thursday evening slot, but was available at the weekends. So we have altered to play on a Sunday night instead. Tonight is the grand opening night of the re vamped club after a month without being able to play exactly what we all would like to play. Mainly due to my workshop not quite being able to hold all the tables for gaming.
Hopefully now we wont have to move again as the new venue is a stable enviroment and is funded to keep it open.
So for my opening game I am expecting my newly painted DAK to be ripped asunder by Craigs armoured cars. After all there is a law about a freshly painted force always losing its first game I'm told.
Posted by Loki at 14:09 1 comment:

I fancied doing something a little different this month and as I have been showing Craig and Kelly how to make some items of terrain, it seemed appropriate to do a project whilst they are working on a few items. 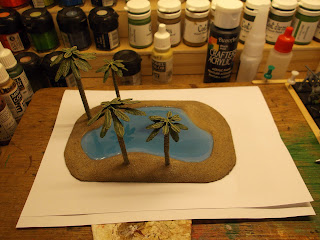 It still needs a few extra finishing touches but I am pleased so far.

Next up I realised I have a dwarf cannon lacking in crew so a raid on my bits box and a bit of sculpting sorted that problem. 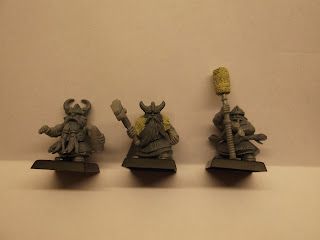 Most people know I like painting one off standards so I was more than happy to oblige when Pete asked me to do some sort of Raven banner for his new saga warband. 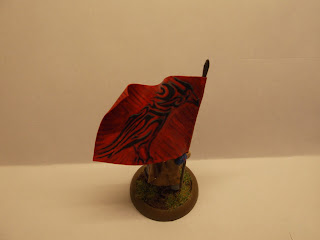 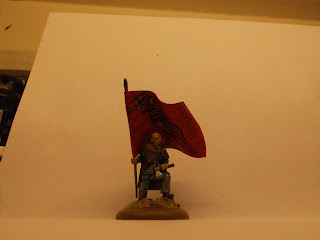 With my recent initiation into fantasy wargaming I decided that I should make some suitable terrain for those games. Games workshop do some very nice kits at reasonable prices so have bought a Chapel and the Garden of Morr sets as a starting point.

This month will see me mainly working on the latter item, its the larger project with 3 buildings a statue and a rather impressive wall and railing system.
First thing to do is work on the buildings bases. 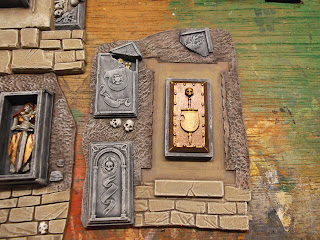 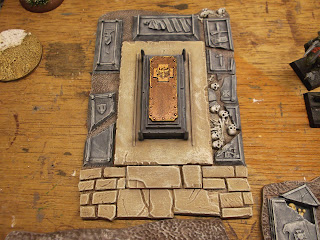 Although some of the caskets will be inside buidings I have oainted them fully as you will be able to catch a glimpse if you look through the railings in the buildings. The statue and base will be worked at the same time as it will be easier to paint as a whole. The main colour feature of the stone work is for a sandstone look, I prefer it to the often seen greys and believe it will be a nice contrast to the graves etc.
Posted by Loki at 12:51 4 comments: