Organised by Trevor Allan and played at Maelstrom games in Mansfield.

Using all rules in the Lasalle rulebook, and from the Honour website, including the latest errata (28/5/10), and optional rules (27/5/10). The only rule not in effect will be the Engineering rules on pages 77-78. Nobility points will be used.
Command ratings of Sub-Commanders: were diced for before deployment of each game. This was a variable within the tournament that kept all the protagonists playing games of toy soldiers, and therefore the tournament’s importance is secondary to all the players having “Good, Fun” games.
Tournament Points:
Decisive Victory 5 points
Marginal Victory 4 points
Draw 3 points
Marginal Loss 2 points
Total Defeat 1 point

Overall this was a well organised and thoroughly enjoyable event, I made some new friends and potential new gaming opponents.
Posted by Loki at 20:26 No comments:

Have been working this week on completing the Saxon horse artillery battery in time  for the first UK Lasalle tournament being held at Maelstrom games next Saturday.
All this whilst juggling the day job and completing 76 sections of enhanced river for a client taking delivery in the morning.
To add to the mayhem I had an idea to create some markers to use in place of cotton wool for showing the firing status of the two batteries I will be using.
so here is the almost finished battery: 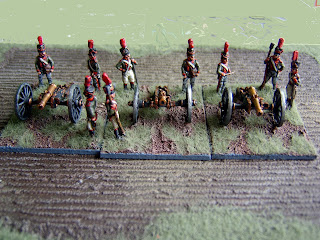 and here is the diversion that almost caused me to fail on the deadline for work this week!! 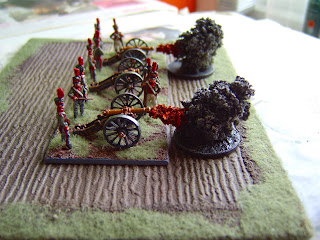 I think they need a bit more dry brushing but certainly an improvement on cotton wool markers. Of course the bases also need to be painted and flocked to match the rest of the terrain too but that should only take up a small amount of time.
Posted by Loki at 19:34 No comments:

Thought I would up load a series of pictures showing how I base my command stands for Lasalle. 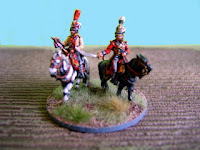 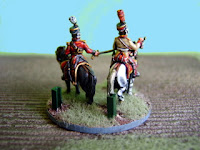 Front and rear view of my organic cavalry command stand (officer and trumpeter of Prinz Johann Cheveaux leger)
The green slots that can be seen hold the command ratings cards that are used in game to represent the tactical rating and vigor of the commanders. 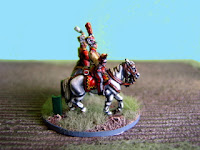 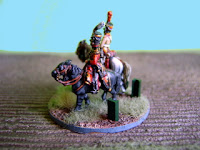 Left and right view of the same command.

I use AB miniatures and unfortunately they do not have Saxon Horse Artillery, so a conversion is needed. This is only a minor job, so out came the green stuff and I created shako Plumes, and then had the job of Making some of the figures wearing overall trousers rather than breeches. 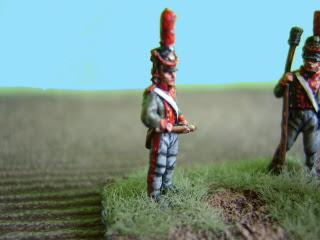 All that remains to complete this unit is to paint the Guns which I need to get completed in short order.
Posted by Loki at 17:01 No comments:

As I mentioned earlier I have started the Polish Core list. I had the camera out earlier to photograph the Saxons and took a couple of pictures of the first 2 Polish Units. So I thought I may as well put them up here.
I need 4 small units for the reserve infantry option as a support to the Saxons, so the first 2 battalions are completed this is the 13th Polish Regt, all dressed in white as they liberated their uniforms from the Austrian army. 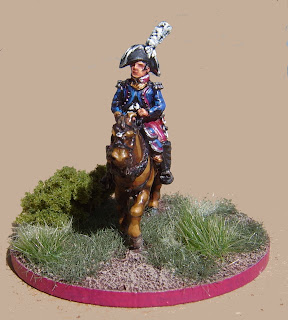 This is my subcommander, I like to edge my bases with a colour to help
distinguish armies on the table so these get Polish Crimson for an edge detail.

2 battalions of the 13th Polish infantry Regiment
All﻿ that remains to complete the core is six more battalions, a foot battery, skirmish & casualty stands and the army command stand. I have almost completed the third unit of infantry and that only leaves 1 more to go before I can use them as a reserve choice for my Saxons.
Posted by Loki at 21:20 No comments:

I must be mad to start a blog!!

I decided to create a blog mainly to document my progression as I compile new Napoleonic armies for playing Lasalle.
I have been wargaming for many years and my work is within the wargames world, as a terrain maker.
This often leaves me little or no time for relaxation or should I say painting miniatures and reading Napoleonic history books. Something I needed to address, as I wanted to relight my passion for the era of the Napoleonic wars.
Having come full circle in my wargaming  journey so far having started with 15mm scale figures in the Late 70's, moved onto larger figures during the late eighties and early nineties and into the new millennium too. Then I decided to give it all up, and concentrate on building my business up from the hobby to one that could support me and my growing family.
Then last year I got hooked on the excellent rules by Sam Mustafa called Lasalle. Having sold all my toy soldiers in the last few years to fund getting my own business of the ground,I decided it was high time I rebuilt some nice Napoleonic armies and started playing some relaxed games with toy soldiers and this gave me the perfect reason to find that lost time.

I started with the Saxon army as this was a nation that I had always wanted to paint but never owned. I set an objective to have the core army and one support option completed by May 2011.I have almost completed the first phase of this army based loosley on the VII corp of the Grand Armee in 1812.