Over the Hills - Napoleonic Rules

Some good friends have finished a new set of rules for gaming in the Napoleonic period, always a favorite period of mine and like many people I am always searching for rules that play easily but have character. I have been given an overview of the game written by the designers and they have kindly allowed me to have some images from the book for exclusive use in this post. 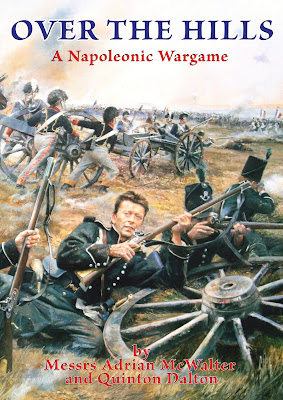 So Over the Hills …. 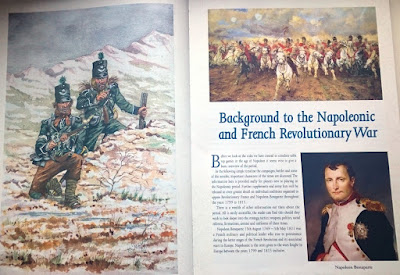 Like all good rules should start there is an overview of the period for those not familiar with it. 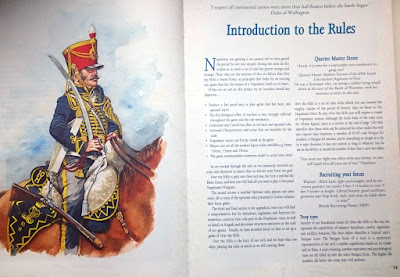 This is followed with an introduction to the rules and game mechanics:

The rules are split into three sections The Basic Game, Optional Rules and Appendices.
The basic game is very easy to pick up and sizable games can be played to a conclusion in a few hours. 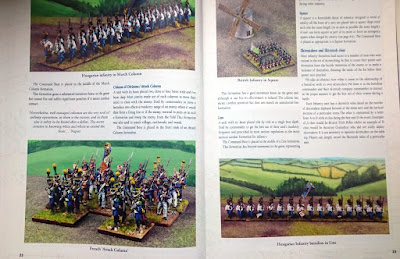 Good clear explanations are given for the various formations used and how to play the game. 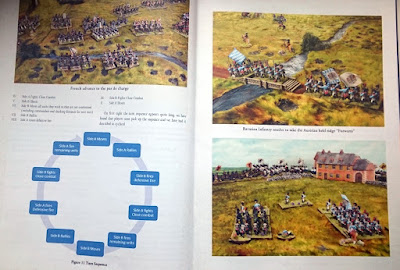 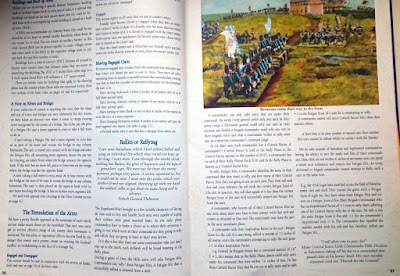 There are loads of optional rules for players to try and in this way a player can add as many of the optional rules as they like to flavour their games the way they want. The optional rules section contains rules that expand on the principles of the basic game, with new formations, new firing and combat factors as well as sections on orders, morale and the weather to name but a few. 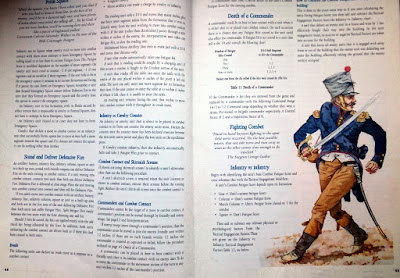 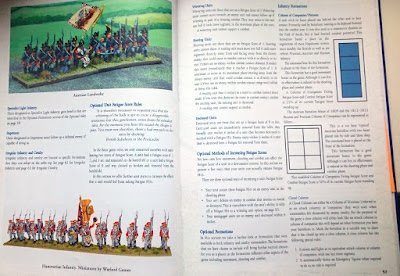 The third and final section is the appendices, where you will find a comprehensive list for battalions, regiments and batteries for numerous countries that took part in the Napoleonic wars, as well as detail on brigade and divisional structures and notes on the scale of our games. 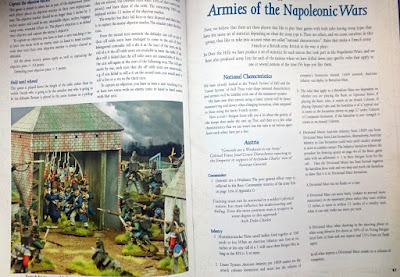 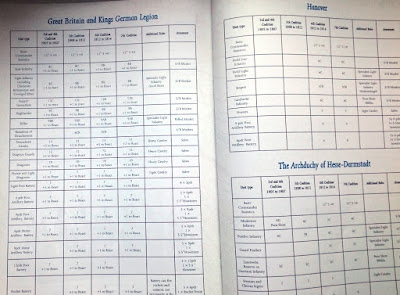 The psychological impact of the battle field will influence everything that a unit does during the game. Units are assigned a single Fatigue Factor and as this degrades so does your unit's ability to carry out any task.

In a break away from games where you throw bucket loads of dice we have decided to keep dice rolling to a minimum. Over the Hills uses D10's and in the basic game they are only used in ranged and close combat.

For those of you who are not blessed by the ‘dice gods', low rolls are good.
National characteristics and army specific command and control ensure each army plays differently.

The rulebook has diagrams and photographs throughout that assist with explanations with additional photographs that highlight what a stunning period the Napoleonic era is to game.

Finally, there are several colour plates of warriors of the Napoleonic age created by Bob Marrion and an easy to read and clearly laid out quick reference sheet.

Basing and Scale of the Game :Over the Hills can be played in most figure scales and the rules are so flexible that players do not have to rebase their armies and armies based to different rules systems can be played against each other.

Units in the Game: Another of our foundation stones for Over the Hills is the way we represent the capabilities of infantry battalions, cavalry regiments, and artillery batteries. We wanted to keep this as simple as possible and decided that a unit be they infantry cavalry or artillery would have only two statistics, a Fatigue Score and a Skirmish Value. The Fatigue score of a unit is a numerical representation of the unit's combat capabilities based on its Grade and its Élan. A units training, combat experience and psychological state are all rolled up into the units Fatigue Score. The higher the Fatigue Score number, the better the troop type will perform.

National characteristics and a unit's number of officers and men can also affect a typical unit's Fatigue Score. This Fatigue Score can be modified during the game, when units suffer Fatigue Hits taken during the movement, shooting and combat phases. To counteract that, commanders have the ability to rally units, a commander who successfully rallies a unit removes a number of Fatigue Hits. Thus good or lucky commanders can keep units in the game, even when all appears lost take (Hougomont, La Haye Sainte, Raevsky Redoubt)

A Fatigue hit marker can be something as simple as a dice or counter whilst some players have created mini dioramas for their markers. It does not matter as long as whatever you choose has the ability to record the number of hits that a unit has taken.

In the basic game Each Infantry unit has a skirmish value based on the number of skirmishers deployed forward of the main unit and the tactical doctrine of a particular army. The value is represented by a letter from A to D with A class being the best and D the worst. In the optional section of the rules this mechanic is extended to cavalry units.

The optional rules open this up and introduces orders, were units are restricted in terms of their movement, formation and tactical options depending on what orders their brigade has been given. Orders can be changed during the game.

Commanders have two other factors that define them, their Control Factor and their Inspiration Factor
The commander's Control Factor is a measure of his and his staff's skill and flare for command.
A commander's Control Factor is represented by a number from 1 to 5, with 1 being the poorest and 5 the best. This number is used in the Rally phase of the turn as it identifies the number of units in his command that the commander can influence per turn.
A Commander's Control Factor is also used in our Optional rules for Orders and Combat bonuses
A commander's Inspiration Factor is a measure of just how good they are at rousing their commands and the factor ranges from -1 through to +2.
A commander uses their Inspiration Factor when they are rolling to rally troops under their command.
.
When it comes to movement each unit can move a number of move segments. The formation a unit is in effects the number of move segments available to a unit e.g. an infantry battalion in Line formation has two segments of movement available to it, each segment being of six inches. This means a battalion in line can move up to 12 inches in a turn, but if it takes the second move segment i.e. moves over six inches it will take a Fatigue Hit, as the commanders of the unit have pushed it on and it has fallen into some disorder.

Contrast with this an infantry battalion in assault column, this unit can make three move segments of six inches. In this way there are clear advantages to manoeuvring in column.

Changing formation is completed by sacrificing move segments and in the optional rules we introduce armies that follow a French manoeuvre system and those that follow a linear system which effects the number of move segments that have to be sacrificed.

In Over the Hills your enemy cannot move their units across the battlefield and then shoot your units, who have to stand there and take it without reply. In Over the Hills one side moves and then the other fires. This breaks up the I go / you go mechanic a little and makes you think about your movement more.

In simple terms the turn sequence is as follows:
Side A checks command and moves
Side B Fires
Side A and B Fight Combats
The turn sequence is then repeated with Side B moving and side A firing.
A unit's Fatigue Score is used in the shooting phase, the higher the Fatigue Score the better chance of a unit scoring hits on enemy units. As a result, better quality units and those that have not suffered much from the turmoil of battle should do well.

The Fatigue Score is effected by such factors as a weapon's range, skirmish class, firer/target formation and cover, this list is expanded upon in the optional rules.

A D10 is rolled against the modified Fatigue Score low rolls are good. depending on what you roll will give you between 0 and 3 hits. Any hits scored are recorded on the target unit as Fatigue Hits.
In Over the Hills no figures are removed, once a unit is reduced to zero fatigue it is removed from the. Rules for units starting to waver and rout are introduced in the optional section of the rulebook.

The close combat phase of a turn represents really close range musket duals and the odd cross of bayonet for infantry and the actual clash of arms for any other combat type. Units fight using their Fatigue Score, to this are added various combat tactical factors which include the type of unit fighting, and its formation, to name a few. Once again this list is expanded upon in the optional rules.
As with the shooting phase a D10 is rolled against the modified Fatigue Score. Combats are decided by the number of Fatigue Hits scored and can range from draws to significant victories for one side or the other.
Individual combats can be fought for up to three rounds in each turn. This can lead to very bloody affairs or on occasions combats that ebb and flow one way and then the other.
Over the Hills offers players many optional ways on how they can win the game. I will focus on my favourite:
Players add up their total army fatigue score e.g. a British Division in 1815 has nine battalions of infantry each with a Fatigue Score of 8 and two artillery batteries with a Fatigue Score of seven. The total Fatigue Score for the division is 86.
Players keep a running record of every Fatigue Hit that their army takes and Fatigue Hits that are rallied from units are not removed from the running total. Once an army has taken more than 50% of its total Fatigue Score it is classed as broken and has lost the game.

Continuing the example given, the British Division would break when it had taken 44 Fatigue Hits.
I have seen players take great delight in seeing their opponents record ‘the butchers bill'

The Optional Rules and Appendices
These two sections are full of new rules and information to allow the player to shape their game the way they want, how you play a game of Over the Hills is really in your hands. I have mentioned a few sections from the optional rules, here are a few more:
Rules for good and poor shots, militia and specialist light infantry. Rules for combining battalions during a game, and several ways to represent skirmishers. An extensive list of terrain types with rules for each, a section on Napoleonic manoeuvring as well as enhanced combat responses. Fighting in built up areas has rules for engineers and pioneers as well as buildings catching fire added to it. The artillery section includes half batteries, regimental guns, grand batteries and rockets.


Well that just about wraps up this post, I would like to thanks Messers McWalter and Dalton for allowing me to showcase their hard work. I would urge you now that if Napoleonic wargames are your bag then go out and buy a copy. The rules are available from Caliver books, just click HERE and it will take you direct to the book and you can make a splendid addition to your library.