It has been a busy week in the Great Hall it started very well with Monday and Tuesday spent at Kevin's sorting both his man cave and our gaming room out and making some big improvements and changes in the layout of both. I am sure he will blog our efforts shortly. Either that or I shall torture him with pointy sticks till he does....

Once again the paint table has not produced an awful; lot due to the heat, funny we spend half the year moaning its either cold or wet but we can still paint indoors but boy when its hot it really does have a major impact. I have been reduced to working 3 hours a day very late at night recently just to tick over.

I have also been busy writing some naval combat rules in the age of sail for us all to use as a group, we have an ex-navy officer in our midsts but try as me and Kev have to understand the rules we have given up. I have volunteered to write a set while Glenn suns himself in Sparta! lucky git! so have until this Thursday to get them finished. However Thursday night did see myself and Kevin and some blocks of wood simulate the rules and play a game with what I have come up with so far so good, and hope remains. I will only mention the blog overhaul in passing as yesterdays post covered the changes in detail. This leads me nicely onto the remainder of this post.

I have said it before I have always held a fascination with pirates and enjoy painting them, I always treat them as one off figures and so the choice of figures can be varied through the painting, if I pick up duplicates or even modified with green stuff given the talents of my good friend Kev in that department. I recently gave some items away to a fellow blogger for his son to play games with him. I had no intention of receiving anything when I did this but the recipient was fairly sure he wanted to return the favour. With that in mind I want my own boys to have more experience and fun with me through playing games so I decided to re visit the Pirate period. I sent a small list of figures that I would like to add to the collection so we could begin the adventures in the near future. 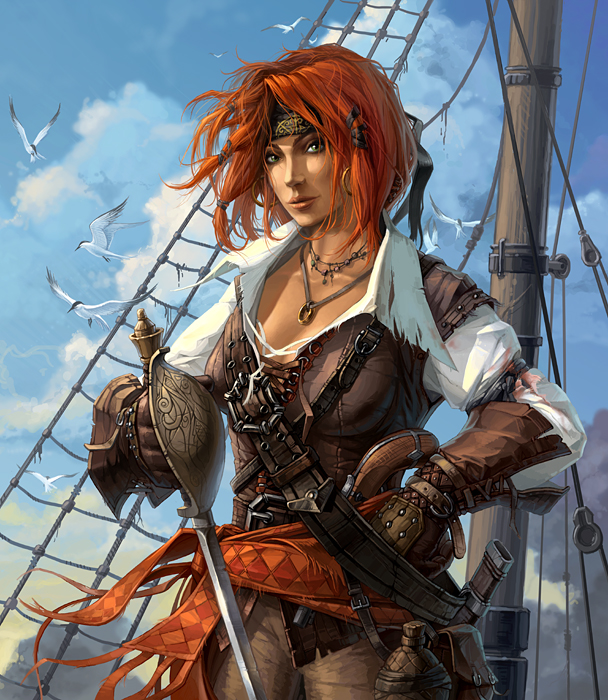 So it really began from there, in due course a parcel arrived and I had me some nice pirates from the Black Scorpion range to begin the adventure. Further negotiations will also see additions in the future as I have done a deal with another fellow blogger in exchange for my painting skills. In exchange for painting a Man of war to display standard for Ainsty castings has also procured a couple of Ships to add to the whole thing. I shall build a small 4 x 4 table for playing at home complete with buildings, port etc to round it all out in due course.

This to me is exciting as it really and really got me thinking as it clearly shows what one can achieve through, trading skills you have, and the power of blogger to assist in that process. None of this would have happened had I not been actively blogging over the last few years, it has enabled me to meet up with like minded people and share the mutual enjoyment of the hobby. I have made several really worthwhile friendships through meets at Salute and Blog Con, various Shows and even long distance acquaintances via comments and interaction from the blogs. For someone who suffers from manic depression this has been an absolute godsend as it gives a focus for me daily.

I have really grown to enjoy blogging and everything that comes with it after all it is something we do without any pay (mostly) and it needs a good level of commitment to make it work properly. I have found that the blog has also aided me greatly in procuring work which obviously is boosting my confidence as I begin to accept that I am able to paint to a fairly nice standard. If I could not I would not get asked to paint anything using that perspective. So let me thank each and everyone of you that has been on this journey with me regardless of the distance you have travelled in my blog.

Now enough of the sentimental stuff and lets get down to business with the first of the pirates to roll off the painting table. I have used some of the Vallejo Triads for the bulk of this figure so you can see how they look. 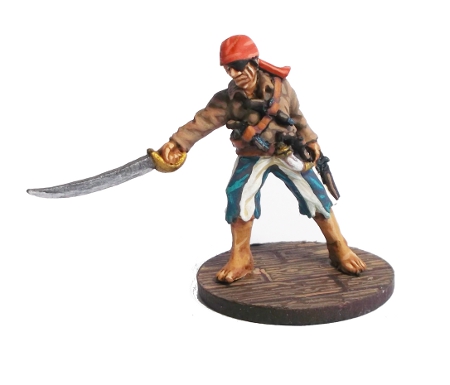 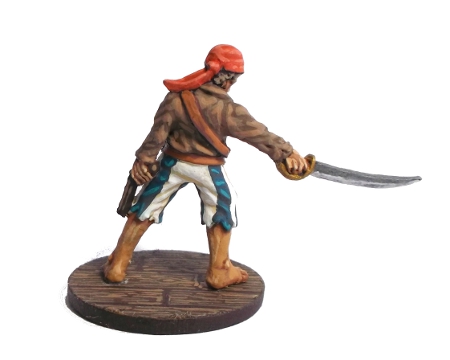 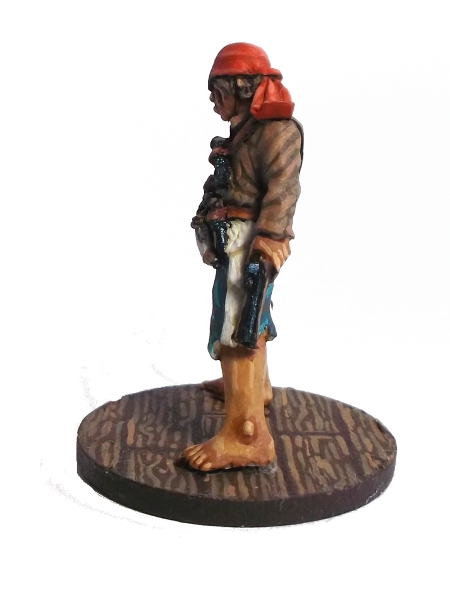 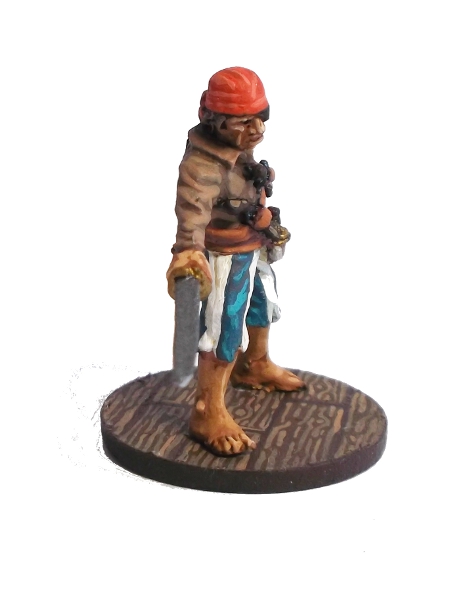 Now before I begin let me just explain the code numbers I use as it may then make sense to you when finding the triads. I give the actual Vallejo number = VMC000, then the bracketed numbers relate to the colour chart position given by vallejo (000). My racks are laid out as per the colour chart so I only ever refer to the bracketed number when picking out my paints. I hope that makes some sense for you all.

I have settled on a theme for all the bases and have gone with a planked look. The deck is started with a full coat of  German Camo Black Brown VMC822 (150), then the planks are defined with VMC983 (143) Flat Earth and some basic etching applied, further etching is given to the planks using VMC874 (134) USA Tan Earth then VMC843 (133) Cork Brown in small random lines.

I used a different flesh recipe for the pirates as I wanted a sun kissed but dirty skin Firstly the skin is base coated with VMC929 (129) Light Brown, it is then washed with some Army painter soft tone before having VMC929 (1290 reapplied to the whole face save the eye sockets, along he side of the nose and parts of the mouth. Then the brow, nose, higher portion of the cheeks and the chin are given a coat of VMC860 (21) Medium flesh tone. Next more definition is given applying a smaller amount of VMC955 (18) flat flesh over the same areas except the nose which I just run down the centre and apply two dots either side. Finally just on the centre of the nose, top of the cheeks and chin I applied VMC815 (17) Basic skintone.

The brown shirt is simply worked from dark to light starting with VMC826 (145) German Camo Medium Brown, and highlighting up with VMC825 (144) German Camo Pale Brown before applying a final highlight of VMC843 (133) Cork Brown.

The Striped Trousers, to make these easier I base painted the whole trouser in VMC976 (120) Buff.
This is also the first stage of the white stripes. However I always work the Dark Stripes first as it means I can tidy up the lines with the lighter colour if need be in the finishing stages. So the Blue stripes are worked up from VMC868 (163) Dark Sea Green, then VMC966 (69) Turquoise with a final highlight of VMC808 (70) Blue Green. The lines are tidied using the buff base colour and then highlighted with VMC918 (5) Ivory and final Highlight of VMC951 (1) White.

The finishing touches were put on the weapons and then everything has been given several coats of varnish to protect them in play.

Right good people I have rambled on long enough this week, I wish you all well for the week ahead and just to let you all know there will be no posting next weekend as Loki has received a very special invitation to play a game in darkest Kent and will not be back in time to post.

Email ThisBlogThis!Share to TwitterShare to FacebookShare to Pinterest
Labels: 28mm, painting guides, Pirates, weekly round up