Firstly let me begin by expressing my thanks on behalf of the whole Warbases team for the excellent suggestions raised so far by you all. I am fully confident that the short list will contain some excellent choices for us to pick through. If you have not yet placed your suggestions then please take a few minutes to list your choices HERE.

I am going to need another longboat shortly as this week has seen the ranks swell once more. Welcome aboard Natholeon, Eric the Shed, Gimzod and JP Price always good to have new additions to the roster row hard chaps and keep us afloat.

The week has not been very productive as far as painting goes with temperatures in the realms of paint drying stupidity! It is not good that even using a wet palette, I found paint drying on the brush between palette and figure on many occasions this week. So large chunks of time have been lost as I have attended to other matters instead. 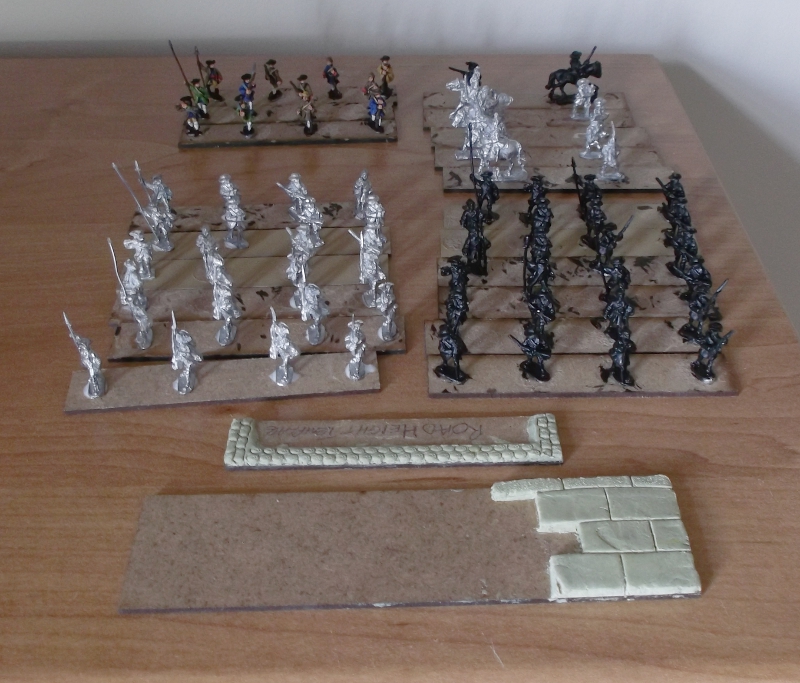 I tried some sculpting and making in roads into another of the products for Warbases, however although the putty did not dry out as quickly the heat caused other problems so I abandoned that for working on in the evenings for now. I have other items currently being sculpted that I cant reveal at this stage,

So I turned my attention to the pile of 15mm American Independence figures and started cleaning and assembling onto paint sticks. Undercoating a couple of units in the late evening. I have even more to paint now after a trip to Kevin's Thursday as he is now concentrating his efforts on the British while I amass the ranks of Americans. This led to him having a sort out of American forces he is not going to paint and I have ended up with some very useful and welcome additions. This is all very handy timing as we are both eagerly anticipating the Release of the Rebellion Black Powder supplement in August and have already got it on pre order.

Thursday night saw us take a break from our usual game night as Myself, Kevin and Glenn sat down for a good chat about the projects we were working on and what we would do going forward. You see one of the major problems is we are all die hard gamers and although we play almost anything from history we don't all enjoy painting armies for some periods ( a common problem) and with that it does occasion periods that get started and never finished. So to that end we have made some agreements that benefit us all. We are a very small bunch but we have known each other for well over 10 years and in that time we have obviously learnt each others strengths and weaknesses. So going forward Glenn will not have to worry about painting anything for AWI or ACW. Kevin an I are excused ship painting duties in exchange thank fully for us!!

A major part of the discussions centered around Glenn's passion of naval warfare, you can't blame the man after 25 years plus of service it runs in his blood. However myself and Kev are confirmed land lubbers and although we like playing with the ships we dont ever fancy painting one to pass muster and scrutiny! We have also had many issues with the playability of Trafalgar so often avoid playing the game! However we have struck a deal and that will see Glenn painting more ships for us all and all three of us combining to design a set of Naval rules that give us the real flavour of the period but with mechanics that make it fun to play and give clear results. So after Glenn's little holiday we shall be extensively testing and refining a set of rules for our use. If things go well then I shall publish them on this very blog.

Next on the agenda was terrain, we have a wide variety of terrain from all over the place and some of it is getting tired. To that end I donated a huge pile of my own pieces to replenish and refresh the tables. I may not be able to produce stuff on mass as before but as I have the skills I will be adding items to our collection to make the table as good as the figures going forward. We have there fore decided to replace things that we no longer need or have better products to replace them with and Kev is going to sell all the old bits off via Ebay to purchase items in the smaller scales we are using now.

I hate to see waste and try to recycle where possible, so I took a piece of our old hedgerow as an experiment to see if I could use it and improve it! One of the problems is that we game with 15 and 20mm in the main so I needed to strike a balance between the two scales as replicating this task twice is just going to be very expensive. So we were after something that would represent hedgerows for all our games.

I began by finding a suitable base and glueing the old hedge to it the started the task of enhancing it with clump foliage to make it more uneven in appearance.

I think I turned a lump of pan scourer coated in sawdust into something that will look much better on the table and it certainly has more realistic look and colouring to it.

It now is a happy compromise height and will work for both our 20mm figures (left) and our 15mm (right) figures. So I am pretty sure I will be revamping a lot of hedge row in due course.

The week ahead looks good with the first two days on operation Man cave at Kevin's, getting his workroom and our gaming room re organised. I hope you all have a great week ahead.

Email ThisBlogThis!Share to TwitterShare to FacebookShare to Pinterest
Labels: weekly round up