Well let me try and get this particular show back on the road, I have not posted a weekly round up in a month now. I have been flat out with many projects and unfortunately this was also accompanied by another bought of severe introversion and some things just had to give in order for me to squeeze everything into the mix. I have not been completely absent from blogger as I have been reading the regular posts while working, however I have been rather remiss in not commenting as often as normal (I do hope you understand). Any how some of the pressure is off and the medication is putting me back on an even keel. So I expect to be writing my usual nonsense on your blogs again shortly.

Right then down to business, firstly welcome aboard to the new followers, Ptr, First Mass, and Ogres_lair glad to have you on board. This past few weeks have been a huge juggling act, not a skill I am proficient at and I tackled the abundant tasks like an elephant turning in a closet. I can say I survived but only just and I should really have learnt by now, that piling on the pressure does me no good at all as my nerves got very frayed on many occasions. I must learn to say no on occasion to avoid the extra pressure.

That said I have made great in roads on the Winter War figures for a client this week and will have these wrapped up by the middle of next week. I have also been working on a painting guide for the Finns and Russians which I will share shortly.

One of the major focal points for me has been a complete reorganisation of the man cave. When I moved into here at the back end of last year although I had planned it out things did not exactly go to plan and space was tight. It should not have been, but work and the challenge meant I did not have the time to properly sort things.

So I spent the entire day yesterday setting the room out to make it better for me to find everything, a task I had already partly begun by moving the paint table and organising that a few weeks back. As you can guess everything had to have a home and that home is also fine tuned as well, OCD really does cause issues sometimes, but I don't do chaos it unbalances my mind. Of course one of the great joys of sorting things properly is the rediscovery of items you know you have, and a few hours were lost as I delved deeper into some of the boxes and treasures I found. I also found a lot of junk kept for the sake of it, yes I also hoard things that may prove useful one day. 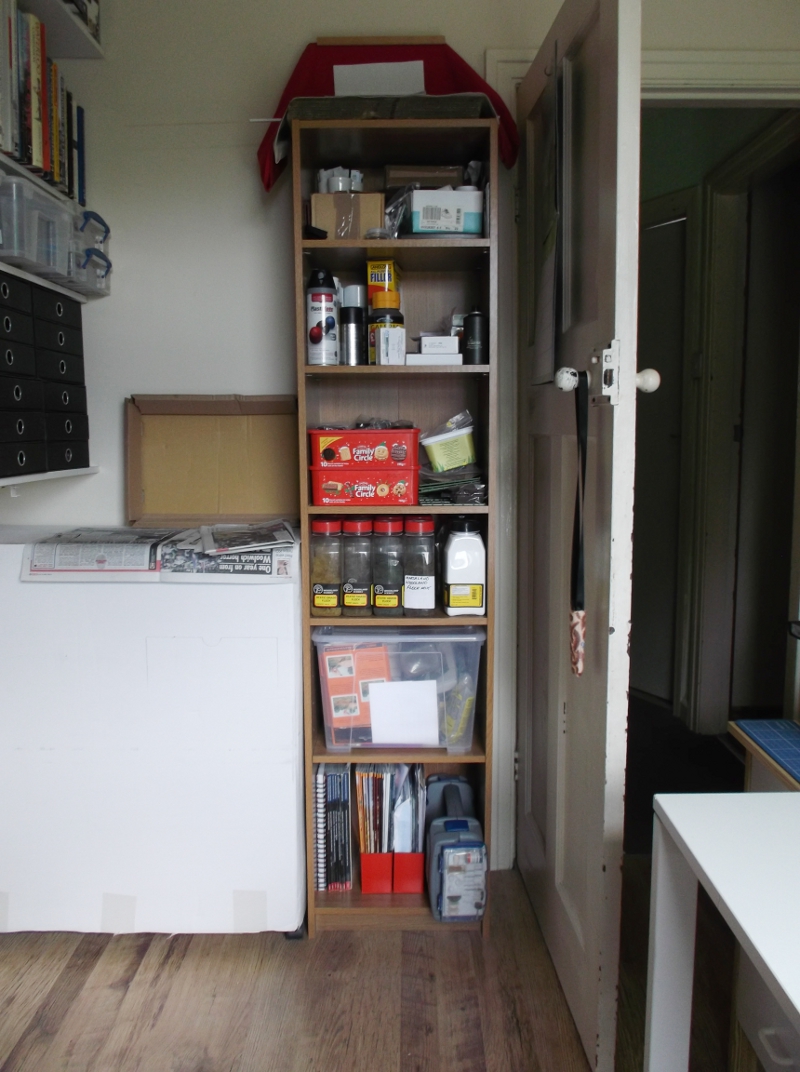 Most of the furniture has been acquired from other parts of the house, that were not in use or were already holding my rubbish as the wife lovingly calls it. The bookcase is now equipped with all manner of useful items and every shelf contains one type of item. Yes even the one that has 16 different types of flock! 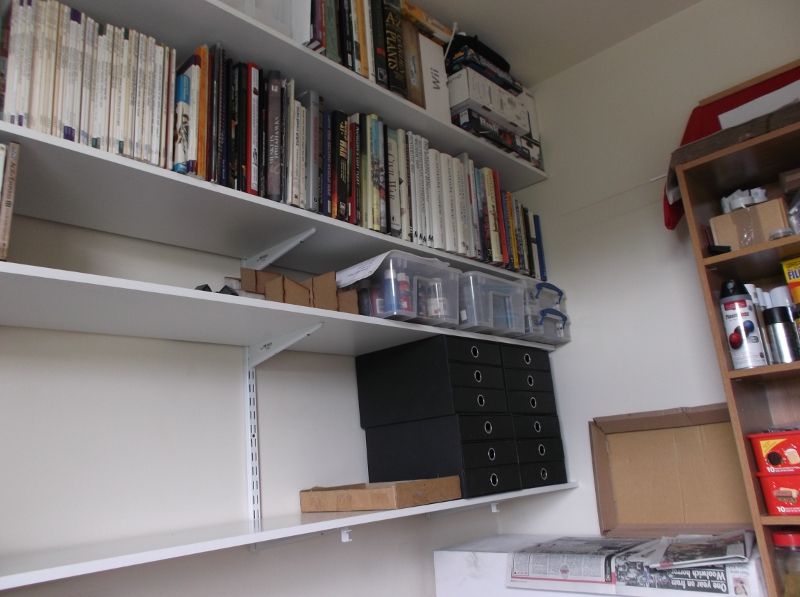 Last year I put up a set of four 8 ft wall mounted shelves and quickly filled them with plenty of boxes and had no room left, so I knew I was going to have to sort that out and make way for further plans and expansion, something I have already mentioned to Martin as I need to store work in progress items effectively. 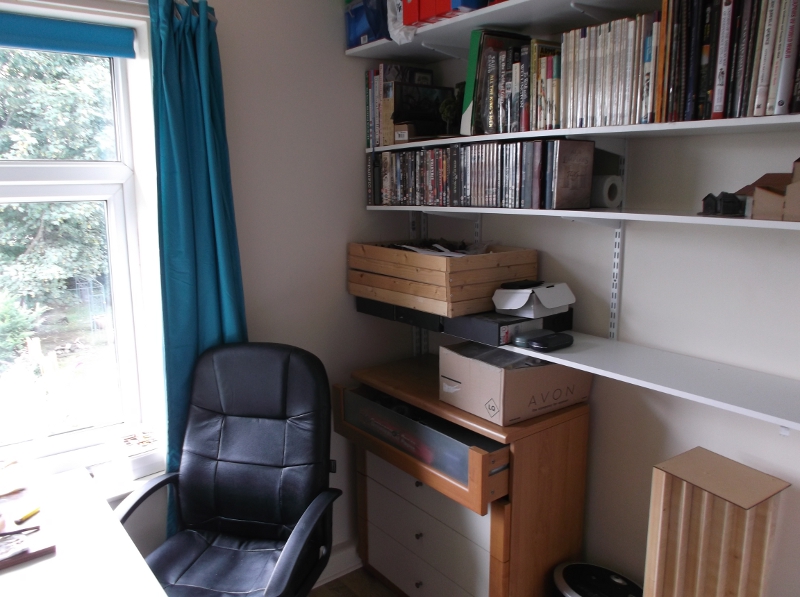 Moving to the other end of the shelving and we find my new drawer unit and to think this was buried in my shed when it had so much storage potential, the middle two drawers are now full to the brim with shiny stuff.
The bottom drawer holds all the items for Warbases Wednesdays. The top drawer is full of paperwork for the business and associated items. 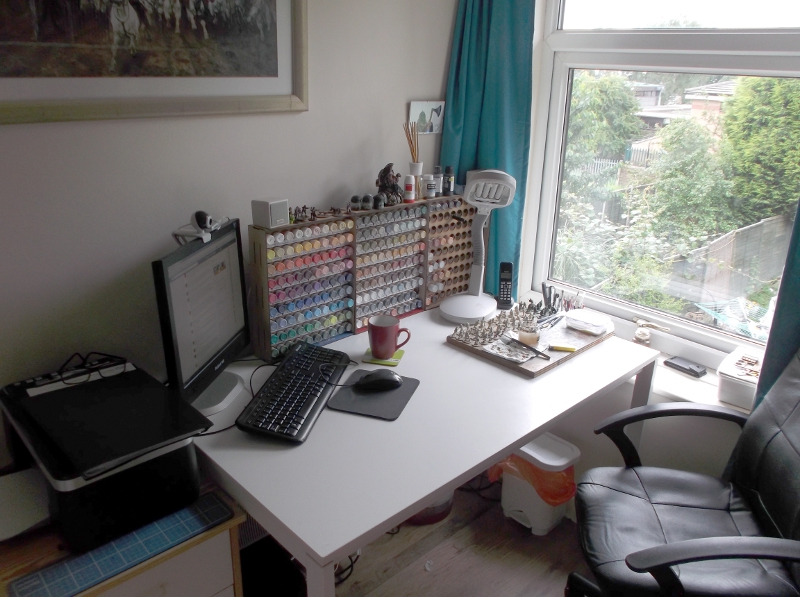 Finally the workstation, with a drawer unit to the left that holds all my sculpting tools and useful bits. I finally put a nail into the wall to hang a very special gift that I received from Pete last year, so much better on the wall than propped up on a shelf. So that is the man cave fully shuffled and any new items now have a place to slot right into the system.

All this lead me in the direction of the next project. I have long thought about what I could really give to the hobby, I own nothing of great value to leave as a legacy. It then occurred to me that I could share the one real skill I have. I am a fairly good painter not the best but one who has experience and a competent level of artistry. It is the one area of the hobby that has been a constant in my life ( 40+ years now) for much longer than the gaming. So I decided that I could share the knowledge I have built up over the years and put together some constructive information to help the beginners and experienced alike.

So began the mammoth task of sorting the entire Vallejo model color range into a full spectrum of triads. This task was much bigger than I had anticipated, in fact it took me over a week to hand paint the samples, catalogue my efforts, create the images and PDF's to share. The task has been completed and I believe I have shown just what is achievable from the range with triads that range from subtle to harsh and in between, a little something for everyone. If you have missed this series of posts just click the new page tabs and help yourself to the downloads.

Well good people I think that nicely gets this summary back on track, thanks for visiting
Posted by Loki at 18:24

Email ThisBlogThis!Share to TwitterShare to FacebookShare to Pinterest
Labels: weekly round up