Boney was a warrior

Away, a - yah!
A warrior and a terrier
Jean Francois!

Normally I would not have bought this figure, nor would I have ever painted him if it had not been for the generosity of a staff member at Wargames Foundry. During one of my Blog con purchases he popped out the back and came back with a spare figure and said he was free and put him in my bag for me!

I did not look until I got home on the Sunday evening and discovered Napoleon. So with this generosity I set about the task of trying to do such a character justice with my brushes. 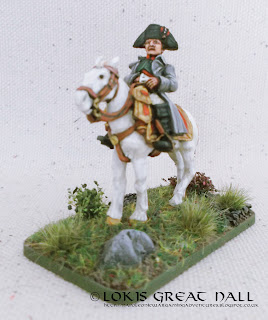 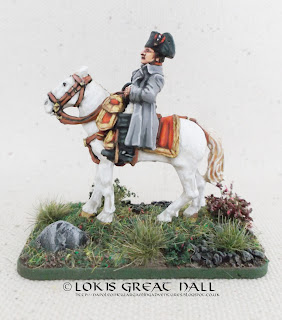 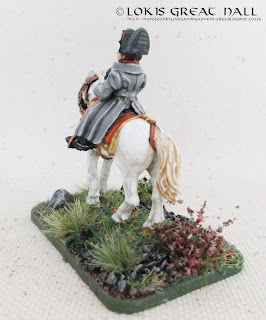 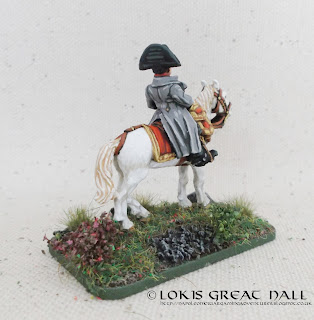 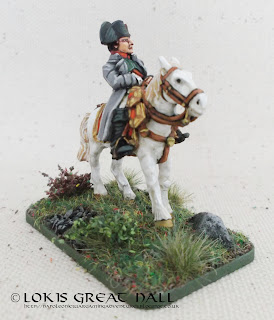 Napoleon has to be counted as one of the greatest military leaders in history, having successfully conquered much of Europe and becoming the Emperor of France.

Born in Corsica on 15th August 1769, to a family of gentry, he was educated at military school, gaining rapid promotion until 1796 when he was made commander of the French army in Italy. Here he forced Austria and its allies to capitulate and make peace. In 1798 Napoleon conquered the Ottoman ruled Egypt in an attempt to break British Trade with India, though this was not a success and he was stranded when his fleet was destroyed in the Battle of the Nile.

France faced a new coalition of Austria and Russia who had allied to Britain. On  his return to France the government was in crisis and in November 1799 a coup d'etat he became first consul. In 1802 this position was extended for life. Two years later however he became Emperor. He oversaw the creation of centralised government, the Bank of France, and law reforms were introduced with the code Napoleon.

In 1800, Austria was defeated at Marengo, he then negotiated a European peace treaty which established French power on the continent. In 1803 Britain declared war on France, later joined by Russia and Austria. Britain inflicted a major naval defeat on the French at Trafalgar in 1805 so the planned invasion of England was abandoned. He turned his attention to Austria and Russia beating them at Austerlitz later in the same year. He annexed Prussian lands which gave him control over Europe and dissolved the Holy Roman Empire, creating Westphalia and Holland. Over the next 5 years he installed leaders from his family and loyalists in Holland, Westphalia Italy, Naples, Spain and Sweden.

The Peninsular war began in 1808, and many costly defeats drained France of military resources. In 1812 the attack on Russia proved disastrous. The tide of favour was now in the allies hands, culminating in the fall of Paris in 1814. After a brief exile to Elba from which he escaped in 1815 and marched on the French capital. This saw the start of a brief 2nd reign however this was ended a short while after the British, Prussian and allied armies beat his Army at Waterloo. He was then exiled to St Helena where he either died or was murdered on 5th May 1821.
Posted by Loki at 14:28