Well it as we all know +James Brewerton is prone to having some good ideas, and this time he has decided to create an open group on Facebook for banter, sledging and exchanging of tips etc  between the various challengers.

The group can be found here : Winter Challenge Facebook Group

Now the group was set up with the title of being a place to generally chat and sledge your fellow competitors, and swap tips etc, and being 'Loki' how could I resist a bit of sledging after all +Ray Rousell has been the target of my badger hunting, and taken the devilry in great spirits, I must admit I am ably assisted in this endeavour by nearly every other challenger!!

James "the Bear" Brewerton however must have forgotten the medium of sledging that he set the group up for, and he made an opening that just could not be resisted and for those of you who haven't had the fortune to join in the banter I believe it is only proper and fitting to share it with you. Its also good to give someone a good lampooning when they deserve it!

So after the Bear had placed a picture of his latest preparation work with the following comment!!! 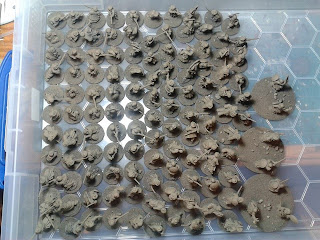 "Afghan Tribesmen all prepped. Black undercoat with brown over spray from above. Have a couple of mounted unit to do. I may add a few modern Afghans to them later so can play modern squad action."

As you can imagine this left him wide open for a barrage of banter and calls of foul play. You can check that by following the link above to get the full picture. After all nothing wrong with coloured primers, but in most peoples mind a primed figure has a single colour applied, regardless of whether the second colour is called primer on the tin.

However I was intrigued in the new method of priming and searched the files of Amazon for the book he informed me he had used in a chat we had later that evening and this is what I found.

Normally I have only ever under-coated a figure in a single colour, be that black, white or grey or one of these new fangled coloured primer spray cans.

However with the new two coat method I could gain an instant shade effect when spraying overhead thus eliminating the need to paint 75% of the figure. The book goes much further than this though and the real eye opener came in the revelation that you can infinitely mix primary colours with black and white primers to create new primer colours. I had to try this out before the challenge started as this could give me a winning recipe I desperately needed. 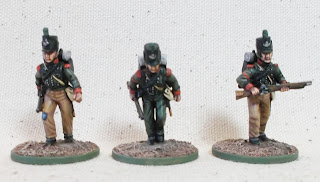 This new mixing method is superb, I believe now a very thinned wash or dip should suffice before a good matt varnish and some flock and tufts to finish.

I urge you all to click the link and come and join the fun and follow both the challenge, and join the banter on the facebook group. There will be plenty to see and comment on as we run up to the opening of the event and for its duration. But every painter should rush out and buy a copy of this book its an eye opener!!!!