Well the idea is to motivate me to paint up my armies alongside my terrain making day job.
I have parted with my Dwarf battalion box set and Craig is kindly going to paint them up so I can learn how to play Warhammer Fantasy.

So my venture for August will be to complete the conversion and painting of 5 Panzer IV F2's, for part of my Flames of war DAK army.
Posted by Loki at 18:06 No comments:

The terrain build is now well under way with & tables fully framed and decked. Thanks to the assistance of members of the new club they have also all been textured and base painted. Not bad going considering these are all 6ft by 4ft tables.

I have managed to get 4 tables all drybrushed up ready to flock. the other three will follow in a few days as i fit these in alongside the regular terrain work of my customers.

Trevor and me sat down on Tuesday and started on the freestanding terrain for the tables, we intend to have plenty of terrain for each table and to be able to run competition games next year. So far we have constructed 100 fields of varying types and sizes. these will need to be painted up but progress is good.

Currently I am drawing all the 15mm sections of flexible road we will need to have in total about 220 pieces. which will include straights and a large variety of junctions.

Well thats all for now. Part 3 will be in a couple of weeks.
Posted by Loki at 16:38 No comments:

Now I have hundreds of Vikings from Gripping beast, Sadly all unpainted.  I bought them years ago to play WAB shieldwall but this never got off the ground. I will however convert them to be able to play either CoE or Impetus I havent decide which way to go yet.
In the meantime I found some Foundry Vikings (unpainted), I need to get a few more as they are not compatible really with Gripping beast figures. The foundry figures however will make me an excellent force for the New Saga rules we intend to play in the new club.

I have enough to paint A lord, 1 point of Beserkers and two points of HearthGuard at present a total of 13 models. Here are the results so far after 4 days of painting.

The Lord (centre) and Beserkers. 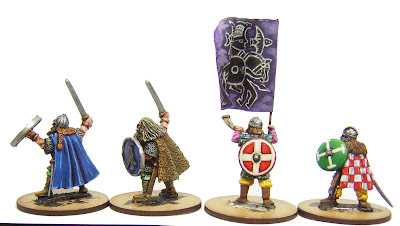 Technically the game does not require a standard bearer but I thought It would look good.

Things have changed for me over the last couple of weeks and after a long evening of discussions with JP, Kieron and Trevor we have all decided to start a new wargaming club in Sheffield.
The intended opening date for the club is the 1st of September, which is not long considering we will have to produce all new tables for the occasion. At least we have the new venue sorted for playing in.

It almost doubles my workload as alongside the building of tables and terrain for the new club, I have the serious task of painting up a lot of figures for new periods and building new armies for playing with new opponents.
Posted by Loki at 16:08 No comments:

I went to visit Kevin an old friend last night to discuss his new terrain project, I took some samples of my freestanding terrain with me, as he had enquired about the flexible roads, and my take on woodland areas. Whilst there he mentioned they were having a game and were unexpectedly a player short, and would I like to join in and play his amended 7 years war rules they had been developing.
Its been a few years since I played this period, and although I have always been attracted to the period, never found any rules that did the period justice.
So play sheet in hand and an express run through of the basics and I was given the hot seat, 3 brigades of Prussian Infanty and 1 cavalry brigade.
The game was great the fighting was fierce and the game flowed really well. In fact the game played so well I asked for a copy of the rules as its high time I got this period back on my calendar.
The rules are called ULTIMA RATIO REGUM (last argument of Kings) and are loosely based on the fire and fury mechanism. I look forward to a further outing in this period.
Posted by Loki at 17:51 No comments: