I have been re thinking how I do my casualty bases for Lasalle and other games in general, and have been trying to solve the problem of making them look more aesthetically pleasing. Not that I really think there is anything wrong with how I make my markers, but as always there is room to improve.
I picked up some dead horses for my cavalry units at the Triples show to use as markers for my Saxon Cavalry. They seem easy enough to paint and although they have some horse furniture differences to Saxon Cavalry, they are acceptable for their intended purpose. However I digress the matter for me was creating some kind of counter to mark the casualties and have the dead fixed atop so they looked like scenic pieces and not just markers.
I then looked at the phase wheel section of the turn counter I had made for me and set about designing some counter type dials using that for inspiration. I made several attempts to work something out but all seemed to be flawed. (really was not the right week to quit the evil nicotine) I could not work out why I was struggling to solve something that appeared to be so simple. I walked away for a while, in fact many hours then bang at 3am having failed to sleep for turning the problem over in my mind I thought I had the answer. Out came the sketch pad to note down the thoughts started to do a mock up and almost but not quite, but oh so close. A few coffees later and I had a working design, the solution was so simple in the end I still fail to see how it took so long to solve the problem.
The design has now gone to be laser cut so keep an eye out for Part 2 as I will document how the idea turns into reality and bring the end result to the table.
Posted by Loki at 19:03 No comments:

One thing that came from the Tournament was the high mobility of artillery in the Lasalle rules. Now while they are designed as Fast play rules and are extremely good to play, they do suffer from a little lack of historical accuracy in some areas.
After a lot of thought and reflection, myself and John Paul decided to play test some amended rules to add some extra realism to the game. After all you cant just change a rule blindly without knowing if the changes affect game play drastically or cause other issues until you try them.

The rules we changed or high lighted are listed below:

Only able to fire if they have not moved, if moved they must spend a turn stationary to fire.
Half the unit may fire needing 5+ to hit so a small unit gets 2 dice a large unit 3 dice.

In the main these changes worked well and produced the right effect we were looking for, we still have to play test them further and have a couple of other rules to add to this small list. (more on that at a later date). You certainly need to think about initial deployment of battery's more carefully and plan ahead. The effect of allowing squares to fire worked extremely well and did not detract from the rules or cause other problems.

We also have some House terrain rules that we are play testing and developing to add even more flavour to the game, we haven't had enough testing as yet to determine if they are right at present but will keep you updated on this as we finalise our ideas.

My next post will more likely be at the weekend and it will be an AAR of our play testing.
Posted by Loki at 19:22 No comments:

I have been gaming the Napoleonic era for a long time, and although Lasalle is a great fast play set of rules it lacks some elements that make the game more tactical. This really is down to the limited effect of terrain in the game, it almost has no effect. To counter this I have incorporated rules from several sources that really add flavour to the game,  integrated into  Lasalle and playtested with some friends.

There are a couple of other areas that we felt needed a little adjustment to make the game a touch more interesting.
so we addressed the movement of artillery and the ability to fire overhead. I felt that cossacks were to limited and added some rules to give them aggression. We have also made some adjustments for infantry too, from firing with a square to lines firing at columns.

Report on the scenario

We set up for battle.

JP was the attacker with Austian Avant Garde with infantry support and Heavy cavalry reserve.
I was Saxon with cavalry support.

Things did not start well both rolling commanders across the board with poor vigor, I did manage to get my Cavalry commander with Exceptional tactics though.

The first two turns pass quietly as both forces jockey into position. 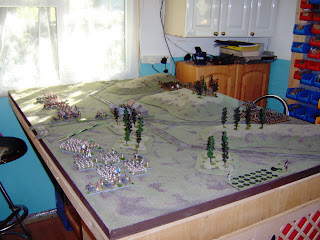 Turn 3 sees The action start as the Austrian gun Battery positioned on the hill starts to pound the Town. And the Cavalry and infantry advance. 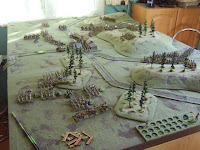 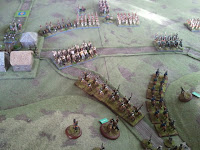 Turn 4 The Saxon Currasiers attend to the threat from the Austrian Uhlans and the Infantry on the Saxon left Flank move to counter the austrian advance. 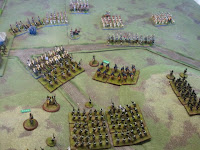 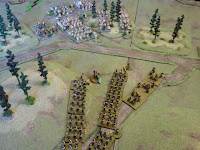 TURN 5
In the combat Phase we sort the cavalry melee with my 14 dice to JP's 12 dice I win 8 hits to 6 and the Uhlans take a disr and fall back, this spooks the Austrian Hussars who fail their test for being interpenetrated . In movement the Austrian advance on the town continues undaunted.

things continue back and forth for several turns until turn 11. It does not bode well for the Saxons, due to an unexplained reason I forgot to move my Cavalry commander and JP takes full advantage running him down, killing him in the advance. The Austrian heavy cavalry reserves arrive and JP rolls a 6 so they come on at point D, were the Saxon line is at it weakest. 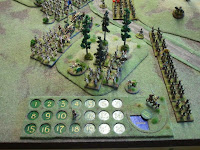 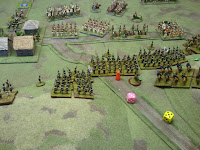 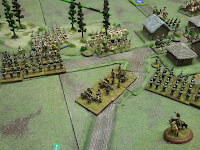 Turn 12 - Fierce fighting for the Town ensues the Saxons manage to hold but elsewhere on the table things are not looking good. Two combats go badly and send Saxon infantry running.

Turn 13 and the pressure continues but still the town is held.

Turn 14 Welcome to combat - The saxon right Flank gets hit hard and they run, the centre sees the defiant town hold but on the left flank the Horse battery loses combat and runs. I decided to try and hit back as a valiant attempt to throw the Austrians back.

Turn 15- with combats across the table Im hopeful but JP has the dice gods tonight and the Saxons are in disorder across the board and are left 1 point from breaking. 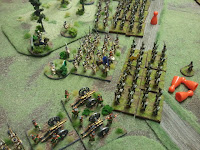 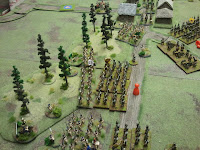 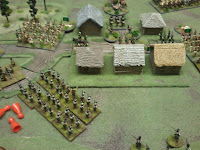 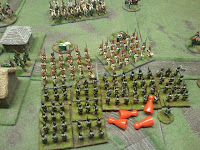 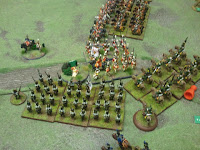 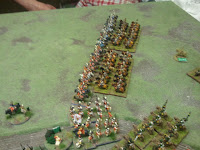 Turn 16 Saxon right sees the battery charge but they mange to save them in combat, but the infantry flee and the line crumbles in combat, The saxon grenadier valiantlybeat of a cavalry attack only to lose in mele to the infantry, but there is hope as the light cavalry throw back the Austrian currassiers.

Turn 17 sees the Town lost and the saxons are badly mauled, we ran out of time at this point but none the less we talked the possible conclusion and agreed that i did hold the second objective well so the result was a Minor Victory to the Austrians.

Summing up: The optional rules work well and with anothe rcouple of games under our belts I will publish them as we have modified what we felt need to be done and they do not unbalance the game, infact they add to it and make the game more tactical.
Posted by Loki at 12:52 3 comments:

This is simply called hold the retreat road, it is an entirely hypothetical scenario.

The Map below is how we laid out the table for this battle, The idea being to further playtest our amended rules. 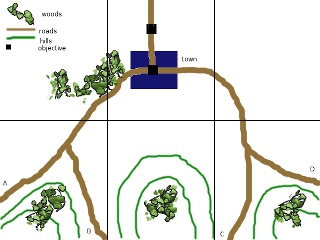 Two objectives feature in this game, One is the Town placed 12 BW in from the defenders table edge, the second is placed 6 BW from the table edge on the road behind the Town.

The Attacker Deploys first and has the first turn, he can deploy 6 BW in anywhere between points B and C.
The Defender can deploy one unit formed in the town the remaining units deploy as per the rule book, 6BW from the table edges.